It is difficult to overstate the impact that Disney’s 2006 original movie, High School Musical had on the drama geeks of the day. As a fourteen year old theatre kid, the tale of an entire school coming together to sing, dance, and publicly celebrate individual difference was an irresistible fantasy. So I leaped at the chance to see High School Musical Jr., the energetic and entertaining new production by the Lopez Conservatory Program. 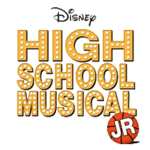 Directed and choreographed by Jeffrey Miller, High School Musical Jr. is the story of Troy Bolton (Blake O’Brien), the star basketball player, and Gabriella Montez (Gina DeChristopher), the math geek, as they try to break the mold of their respective cliques by appearing in the school musical. Mr. O’Brien and Ms. DeChristopher shine as the star crossed lovers, straining to break the “status quo”. They are both very natural in their acting, and their rendition of “Start of Something New” was musically precise, and very moving.

But it wasn’t just the two leads that struck sparks onstage at the GMU Hylton Center for the Performing Arts. The whole ensemble of High School Musical Jr. blew the audience away with their talent and energy, particularly during full-company numbers like “Stick to the Status Quo.” The choreography was age appropriate but very entertaining, and Music Director Heather Konovalvov was able to guide her young cast into all the right harmonies.

As Troy’s best friend, Chad Danforth, Emily Barre was faced with the exceptional acting challenge of playing a male basketball jock. This she did with great commitment and skill, modeling her physicality into a perfect imitation of the quintessential dude athlete. Melissa Handel, as the school announcer Jack Scott, also used her gender bending acting talent to create a character that was strong and fun. Laila Gallant is hilarious as the conniving Sharpay Evans, the self appointed queen of the Theatre Clique. As Sharpay’s twin brother Ryan, Jason Itken gives a committed performance. I also enjoyed Misha Mullany as the wacky theatre teacher, Ms. Darbus, who reminded me of more than one theatre instructor I’ve had in my lifetime.

Overall, I saw a lot of exciting young theatre artists in High School Musical Jr., and the Lopez Conservatory Program should be lauded for their efforts to train young actors and musicians. High school may still be divided into cliques; but, for a few hours, at least, we were all in this together. 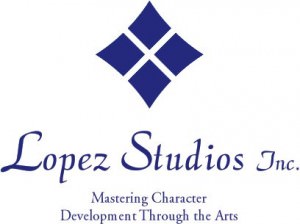 High School Musical Jr. played for one day only on August 16, 2014 at GMU Hylton Performing Arts Center – 10960 George Mason Circle, in Manassas, VA . See the full schedule of events at Hylton here, and check out the Lopez Conservatory Program here.