Paying tribute to Neil Sedaka’s career that spans almost 60 years and has generated more than 500 songs is a daunting task. Grammy nominee Jim Van Slyke, however, has found a way to do just that. Praised by Sedaka himself, The Sedaka Show has been met with great acclaim, sparked a friendship between the performers, and led to the recording of the Sedaka Sessions album featuring a pair of duets by Van Slyke and Sedaka. The Sedaka Show closes out NextStop Theatre Company’s Summer Cabaret Series, which Van Slyke helped produce, and their first year as a professional theater. Jim Van Slyke’s performance made for a strong finish.

Jim Van Slyke has been a long time member of the northern Virginia musical community both as a performer and a vocal coach; he referred to the NextStop Theatre Company as his home.  In 2013 Van Slyke suffered a potentially career-ending injury to his vocal fold that for a time left him unable to speak or sing. During the 18 months since his injury this is only the second time he has performed The Sedaka Show. Van Slyke made it very clear how much he appreciated the support of the local community. This particular performance, then, represents a homecoming, a reemergence, and a tribute to both the community and Jim Van Slyke’s recovery.

With all of this in mind, Jim Van Slyke’s already amazing voice becomes even more impressive. It wells out of him effortlessly and flawlessly. His smooth sound and delivery are reminiscent of the classic crooners and his voice has an uncanny likeness to Neil Sedaka’s. Interspersed with the songs are stories about Van Slyke’s experiences developing the show and his growing friendship with Sedaka. The beautiful accompaniment by accomplished Musical Director Maureen “Reenie” Codelka makes for an enjoyable evening full of wonderful story and sound.

Songs of particular note are, “The Other Side of Me,” with equal parts melancholy and soulful power made for a wonderful early showcase of Van Slyke’s vocal flexibility. An elegantly arranged combination of “Pray for Rain,” and “Laughter in the Rain,” exemplifies Van Slyke’s showmanship and playfulness. His rousing performance of, “The Immigrant,” (written by Sedaka for John Lennon during his struggle for American citizenship) is both sweet and sad.

The highlight of the evening, though, is the medley celebrating Sedaka’s Doo Wop era hits. Van Slyke takes over the piano and sings through some of the greatest Doo Wop hits, “Oh Carol,” “Calendar Girl,” “Happy Birthday Sweet Sixteen,” “Next Door to An Angel,” “Where the Boys Are,” many of them you might not realize were penned by Sedaka. This was later followed up by a medley of amusing children’s versions of many of the same songs, adaptations that Sedaka has recently released such as, “Where the Toys Are.” 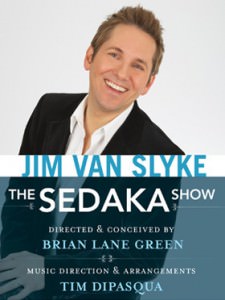 The full set list includes: “That’s When the Music Takes Me,”  “The Other Side of Me,” “Bad Blood,” “Breaking Up is Hard to Do,” a combination of “Pray for Rain,” and “Laughter in the Rain,” a Doo Wop Medley of “Oh Carol,” “Calendar Girl,” “Happy Birthday Sweet Sixteen,” “Next Door to An Angel,” “Where the Boys Are,” “Brighton,” “Gone with the Morning,” a Kids version of the Doo Wop Medley, “Love Will Keep Us Together,” “The Immigrant,” “The Diary,” “Should’ve Never Let You Go,” “The Hungry Years,” “Solitaire,” “Anybody Gonna Miss You,” and “Workin’ On A Groovy Thing.”

The Summer Cabaret Series concludes TONIGHT,  Sunday, August 17, 2014 with the final performance of at 6:30 PM of The Sedaka Show at the Industrial Strength Theatre – 269 Sunset Park Drive, in Herndon, VA. Purchase your tickets online, but for an additional fee you can buy tickets over the phone by calling OvationTix at (866) 811-4111. Reservations are strongly recommended due to the intimate size of the space.