In Part Two of a series of interviews with the director and cast of Prince George’s Little Theatre’s Brighton Beach Memoirs,  meet Annalie Ellis (Laurie).

Joel: Where have local theatregoers seen you perform on the stage?

Annalie: I am a freshman at the Performing and Visual Arts Magnet at Annapolis High School majoring in Theater. As well as acting, I also enjoy singing and dancing. I have been performing in theater for four years, appearing in nine productions in that time. Some of my roles include Helen Keller in The Miracle Worker, Tiger Lily in Peter Pan, Erzulie in Once On This Island, and Pepper in Annie. I am also a working actor in various on-camera productions throughout the Maryland, DC, Virginia area.

What made you become interested in Brighton Beach Memoirs?

Most of my background is in musical theater, so I thought this was a great opportunity to perform in a straight play. After reading the script for Brighton Beach Memoirs, I knew I wanted to be involved in this production.

Introduce us to the character you play.

I play the part of Laurie, the youngest of the family and also the most spoiled. Her mother and aunt dote on her because she has a “flutter in her heart,” though you may find that she is not quite as helpless as they make it seem. Like me, Laurie is a bookworm, which is what I think makes her so savvy among the personalities in the house. 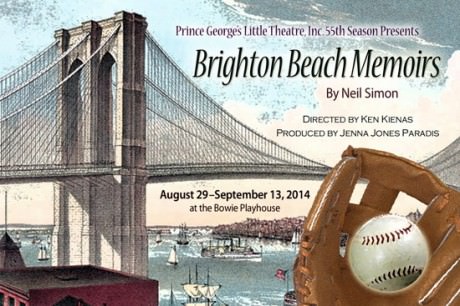 What do you find interesting and challenging about playing your character?

Laurie is the same age as me so obviously we have some similarities, so I try to focus on the traits that make Laurie different like her brattiness. I am the oldest of four, so I am not spoiled in the way Laurie has been.

What have you learned about yourself the actress while shaping your performance?

Every role is an opportunity to explore different sides of yourself. Many people think acting is just pretending to be someone else, but in reality you are putting yourself in all of your character’s circumstances which translates into actually “being” the character. It has been a lot of fun exploring my more bratty side.

What do you like most about Brighton Beach Memoirs?

I enjoy the fact that it is a comedy which I have never done. I also like that it is a very small cast so we are very close knit.

How do you think the audience will react to the play?

I definitely think the audience will laugh, and hopefully a lot. With so many different personalities in the same family, under one roof, I think every audience member will relate to at least one of the characters.

What will they enjoy?

I think they will enjoy the interactions and different relationships between each of the characters. Some of the dialogue is really outrageous. I can’t wait to see how the audience reacts.