Last night, Grammy-nominated, Billboard chart-topper, and actor Josh Groban dazzled a sold out audience with selections from his newest album, All That Echoes, and oldies but goodies from earlier records. The charming musician’s rich voice, backed up by the Wolf Trap Festival Orchestra and some serious percussion, rhythm, and violin, soared across Wolf Trap’s Filene Center.

Groban opened with “Changing Colors” from his iTunes Live from Soho EP, an interesting choice of starter. His next selection, “February Song,” showed off some lovely high notes and built to a cool jam session at the climax with guitarist Tariqh Akoni and violinist Christian Hebel taking the lead. The band and orchestra picked up speed, and the audience’s excitement and energy was palpable.

As the night went on, Groban sang favorites from different points in his career and gave a bit of back-story about some of the selections. While there were a few issues with the orchestra not being entirely together at times, the “Grobanites” in the audience (Josh Groban fans) ate up his charm and charisma. His apparent genuine desire to share his story and connect with the audience was really refreshing, and he had a solid and comfortable stage presence. He cracked jokes and probably broke some hearts, too. Groban’s easy-going personality and wit has no doubt won him fans in the television and film world, with appearances in The Office, Glee, and Crazy, Stupid, Love, among many others. 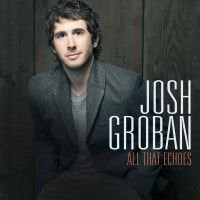 Violinist Hebel also took a solo turn towards the middle of the performance with his own fantastic composition and cover of Aerosmith’s “Dream On,” a very cool take on the rock classic. Guitarist Akoni gave a solid and fun performance on acoustic and electric guitars, and Groban himself even played a little percussion, at which point a few ladies in the audience lost their heads.

Groban sang other favorites like “To Where You Are,” “Happy in My Heartache,” “Caruso,” and “You Raise Me Up.” His cover of Stevie Wonder’s “I Believe (When I Fall in Love It Will Be Forever),” complete with gospel choir, was a true crowd-pleaser. His best selection of the evening, however, was a new Stephen Sondheim medley, featuring songs from Into the Woods and Sweeney Todd: The Demon Barber of Fleet Street. Everything just clicked into place—the medley fit his voice perfectly and the performance felt especially intimate.

Running time: About 1 hour and 40 minutes with no intermission

Josh Groban with Wolf Trap Orchestra played on Tuesday, August 19, 2014 and plays again tonight Wednesday, August 20, 2014 at 8 PM, at The Filene Center at Wolf Trap Foundation for the Performing Arts —1551 Trap Road, in Vienna, VA. For tickets, purchase them online, or call 1-877-WOLFTRAP (877) 965-3872. For future Wolf Trap performances and information, check out their calendar of events.