As Sharpe introduced the program to a house full of fans of his work, Sharpe dryly assured them that the title Hand Jobs referred to…typing. But if that double entendre was what attracted anyone to The Kennedy Center Terrace Theater, what kept the crowd in raptures of laughter and rapt emotional connection was something altogether more powerful and important. In the brief talk-back after, audience members asked aloud what needs to happen to get this work produced. Good question.

The short plays have a few things in common: They’re all set in and around DC and they each feature a particular life or relationship crisis affecting one or more gay black men. Yet the situations and the characters are so specifically rendered that we fully enter six completely different and compelling worlds.

You Don’t Know Me takes place in a coffee shop where 27-year-old Tyler (Stanley Z. Freeman, left) is about to meet, or rather ambush, Gloria, the wife of the 54-year-old man with whom he has been having an affair. As Tyler first explains to his disapproving best friend, Prentiss (Ricardo Lumpkin, center), he intends to confront the woman, let her know about the affair, and convince her to see the light and cede to him her husband. That Tyler is deluded becomes apparent when the no-nonsense Gloria (Barbara K. Asare-Bediako, right) enters and the play takes a completely unexpected turn that is both hilarious and poignant.

Air-Tight is set in a motel room in Southwest where an anxious landscape laborer, Graham (Brian Hamlett, left), is visited by his employer and lover, Austin (Larry Hull, right). Graham’s girlfriend has been murdered and Graham’s a suspect. But Graham has an airtight alibi because all during the weekend when she was killed he and Austin were having sex. Austin, however, is a man of prominent social standing and is loathe to be tainted by the scandal that would ensue if he vouched for his working-class lover’s alibi. Sexual attraction meets class tension meets evidence-gathering intrigue in a riveting one-act that’s also airtight.

A signature of Sharpe’s short plays is an unforeseen disclosure, and what’s revealed in Legacy could not be more heartbreaking. The play is set in the bedroom in Anacostia where Kevin (Jason Evan Barrett, left) and his younger brother Keith (Christopher Pree, right) once shared a bunk bed that is now just Keith’s. Kevin, who is gay, abruptly left home and purposely did not come back to attended their father’s funeral, which Keith resents because to Keith, who is straight, their dad was a hero. I  had to catch my breath at the several painful revelations about their deceased father that come to light, and how the brothers’ relationship is profoundly changed, and I doubt I was alone among audience members who now and then choked up.

The homophobia in bullying experienced by young gay men, a theme obliquely addressed in “Legacy,” surfaces in Blast from the Past, which is set just outside a motel ballroom where Brendan (Raquis Da’Juan Petree, left) is attending his 20th high school reunion. A classmate comes up to him from behind, covers his eyes, and demands of Brendan, “Guess who?” Turns out to be Stuart (Monte J. Wolfe, right), who tortured and tormented Brendan when they were students and who has come round to make amends. The twist at the end gets an approving laugh of recognition as well as a bittersweet pang of the pain that need not have been.

Never one to shy away from explicit gay sex, Sharpe also casts a discerning and nonpandering eye on it that always reveals more than meets the lusting gaze. Raw Deal is set in a cheap room in an airport motel where Jackie, a pornographer (Donald Burch III, right),  is set up to shoot a low-budget gay sex tape. Jackie negotiates with a hot and horny teen, Red (Juan Raheem, center), which sex acts on camera will pay how much. The catch is, Red will score the biggest bucks only if his co-star top, in the vernacular of the play, smashes him raw (i.e. without a condom). As Jackie exits, the designated fuck buddy, Corey (Tristan Phillip-Hewitt, left), steps out of the shower. The exchange between the two is anything but fluid as Red and Corey wrestle with the high cost of performing for top dollar.  The revealing interpersonal drama that Sharpe portrays here inside the exploitative manufacture of sexual commodification is as disturbing as it is moving.

The sunset referred to in Sunset is the one to be seen from the front porch of a house in Takoma that long-time lovers Daniel (Jesse N. Holmes, left) and Vernon (Gregory Ford, right) have shared for 20-plus years. Now Daniel needs a wheelchair and a walker, and Vernon is telling him he must get to a vital doctor’s appointment. But Daniel refuses. Terminally ill, he simply wants to stay and watch the sun go down together. The entire vignette is touching and tender beyond words. At a point Daniel breaks into song, the Jennifer Holiday showstopper from Dreamgirls (“And I am telling you, I’m not going!”). And it was as if the audience’s laughter broke through tears.

In addition to writing Hand Jobs, Alan Sharpe directed—and assembled an exceptional cast, each one of whom brought illuminating nuance to their role. As an overall experience of heart-stoppingly good writing and performance, the evening was the equal of any major stage event in town. So why indeed is this writer’s work not professionally produced? 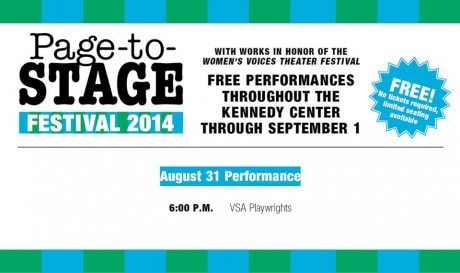 A Report From Page-to-Stage: ‘Carved in Stone’ by John Stoltenberg.