Of course The Nighthawks lived up to their reputation as “the quintessential bar band.”Forty plus years in, DC native Mark Wenner only gets better and a bit funkier. The surprise of the evening was the Kelly Bell Band (KBB) who used to back Bo Diddly. As a final send-off, the two bands joined forces to take on Bo Diddly’s “Can’t Judge,” Al Green’s “I Am So In Love With You,” and the audience-rousing “Shakey Ground.”

The Nighthawks’ set combined some of their older popular repertoire with several cuts from their new album, 444, including the title track “444 A.M,” written by Johnny Castle, the band’s bassist. Among my favorite new songs were “Price of Love,” “Nothin’ But The Blues” and “Walk That Walk.” Drummer Mark Stutso’s brought his distinctive voice to “Damn Good Time,” my personal favorite from the set. Paul Bell, the band’s guitarist, was essential in supporting the band’s journeys through roots rock, bluegrass, blues and their own mix of original inspirations.

These are no new kids on the block; Wenner started The Nighthawks in 1972. Unlike many older bands having their comebacks after decades off the road, the forty year reign of The Nighthawks as been unbroken. Their music always remains relevant whether drawn from old-time blues or more contemporary beats.

The Kelly Bell Band, seven members strong, captured the audience with their fresh sound and playful manner. From the first number, “Headliner,” sung by Bell and vocalist Rahsaan “Wordslave” Eldridge, to the close of their eight song set with “Somebody’s Fool,” Baltimore native Bell threw down his own version of phat blues, combining many sources of blues music with funk, rock and jazz. 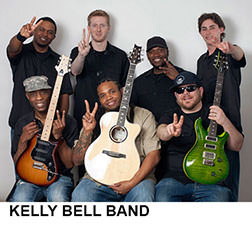 “Headliner” showcased the band’s cohesive sound and ability to maintain a smooth groove. “Shoulda Been You,” the title track from their latest album, Too Far Gone, featured killer harmonies and a big sound. The band never crossed the line from a big and powerful sound to a wall of sound, the latter being something I despise. Two of my favorites from their first set were “Another Man’s Name,” a very gritty funky number, and “Somebody’s Fool,” written by Bell as a testament of hatred for an ex-girlfriend. Even in this number, Bell seemed like the man anyone would love to bring home to introduce to the parents.

The set was made even better by the playful interactions between guitarists Ryan Fowler and sax player Alex Crean, Bell, and Eldridge, and guitarist Ira Mayfield, bassist Derrick Dorsey and drummer John Robert Buell. Having my first experience hearing the KKB live, I understand why they have been named the best blues band in the mid-atlantic region for 12 years straight and their 1998 debut album “Phat Blues Music,” remains one of the best selling CDs in the region’s history.

The evening closed with what Bell called every bands favorite part — the encore. He instructed the audience that both bands would walk off stage, followed by the audience clapping and shouting, thereby bringing the band back on stage, all looking shocked and surprised that the audience was clamoring for more. “Before You Accuse Me,” definitely was worth the theatrics.

The legendary Nighthawks always draw a big crowd. The Kelly Bell Band is worthy of the same allegiance.