How am I ridin’? I am ridin’ high after seeing the delightful, delectable The Cole Porter Project: It’s Alright With Me!, a cabaret-style show now playing at The In Series performing at Source. The wonderful music of Cole Porter nostalgically transports you back to High Society of the 30s. Add a dose of sentimental love lyrics, spiced with a dash of Washington DC political flavors and favors, and you have the perfect recipe for a smash comic hit and deliciously entertaining evening of timeless song.

Directed by Greg Stevens, The Cole Porter Project: It’s Alright With Me! returns again for a delirious romp through thirty-five of some of the best-loved and also lesser known songs of Cole Porter, including “Love for Sale,” “It’s Too Darn Hot,” “You’re the Top,” “Ev’ry Time We Say Goodbye,” It’s De-Lovely,” “From This Moment On,” “The Gypsy In Me,” and “Just One of Those Things,” and the lesser-known “No,” “Experiment,” and “In the Morning.”

Conceived and written by Steven Scott Mazzola and Greg Stevens, The Cole Porter Project: It’s Alright With Me! is a lighthearted tribute to an American master of musical theater made zanily contemporary playing lightly with Porter’s lyrics through a litany of DC politics and prose.

Outside a restaurant on 14th Street, a young couple questions whose idea it was to meet on a Friday night on 14th street anyway because it’s “Too Darn Hot.” And any power ball lobbyist knows that influence is not really “Love for Sale.” One just has to “Use Your Imagination” to get your bill pushed through Congress.

The show is a two-hour hoot of a blast of great Cole Porter music and lyrics mixed up with DC political terms of endearment and great fun.

Layered with cut-up references to John Boehner, Obamacare, earmarks, and the global warming debate, among others, a Porter medley of political jabber “rings bells, sings songs, blows horns, and beats gongs” that any true-blue Washingtonian will get an absolute kick out of.

The two-act show moves through a musical panorama marking each of ten scenes with easel-stand placard signs. But the scene-markers could not be seen by the audience from every point in Source’s theater in-the round.

Musical Director and pianist Alex Tang with Ephraim Wolfolk on upright bass provide musical accompaniment that is as magical as the music itself.

Under the direction of Greg Stevens, choreography by Angelisa Gillyard, set by Greg Stevens, lighting by Stefan Johnson and costumes by Donna Breslin, The Cole Porter Project: It’s Alright with Me! takes you on a sentimental journey back in time with present moment zing. It’s delimit. It’s deluxe. It’s de-lovely. 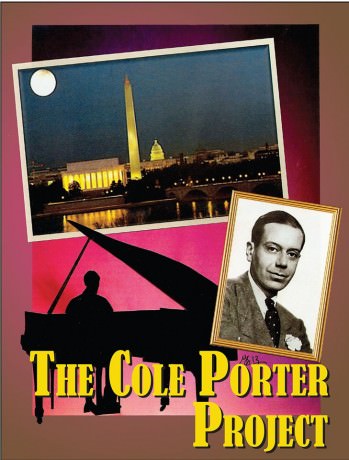 Running Time: About two hours, with one 20-minute intermission.

LINK
Jane Coyne reviews ‘The Cole Porter Project: It’s All Right With Me’ at The In Series on DCMetroTheaterArts on February 23, 2014.