After a two-year incubation period, local company dog & pony dc brings their new devised theater piece Toast to the stage. It is billed as an exploration of innovation and scientific discovery – tracing the advent of the toaster to Benjamin Franklin’s electricity experiments during a fake meeting of a secret scientific society called T.O.W.L. (The Order of Wind and Lightning).

Devised theater means there is no playwright. Instead, directors Rachel Grossman, Ivania Stack, and Wyckham Avery along with a huge team of performers work shopped ideas with and without an audience. Even with all of the pre-work, it remains a largely improvised show with long minutes of audience interaction. It also includes films, PowerPoint presentations, and breakout groups with the audience.

A rotating group of 17 actors fill six roles. Some performances are ASL interpreted. For this performance, Tyrone Giordono, Jon Reynolds, Melanie Harker, Tamieka Chavis, Jared Mezzocchi, and Lindsey D. Snyder played a kooky and hilarious cast of characters – including the extremely over enthusiastic newbie Sam (Harker), the bitter, betrayed veteran Chris (Reynolds), the Dalai Lama quoting Morgan (Mezzocchi), and several other scientists.
The play is at its best when these characters are pinging off one another and the audience with such enthusiasm you can’t help but play along and laugh. Like dog & pony dc’s recent hit Beertown about a fictional town council meeting, Toast actors are in character from the moment you enter the venue and the audience becomes new members of the Order.

Before the official meeting, there is a science fair filled with strange facts and activities as the actors ad lib and warm up the crowd, then the meeting of T.O.W.L begins. What follows is over an hour of audience participation in a brainstorming session to find the next frontier of scientific discovery.

It’s also where Toast stumbles a bit. They take the process absolutely seriously – but in doing so they blur the line between performance, satire, improv, and a real meeting. Instead of enjoying a performance, we seem to actually be attending a scientific society meeting, which is far less fun than attending a fake scientific society meeting. It’s a shame because the long brainstorming sessions do not allow the actors much time to interact with each other.

That being said, this is very much a work in progress. The devising process doesn’t stop just because opening night happened and with different actors and a different audience every night, it will be a new show tomorrow.

There were a number of magical moments that are only possible when the audience and the actors get close to each other, throw out the script, and see what happens and those moments are eminently worth seeing the show for, because you really won’t find it anywhere else. Dog & pony dc continues to explore the frontier of what theater is and can be and Toast offers a warm-hearted and creative addition to their canon.

Running time: 2 hours, with no intermission. 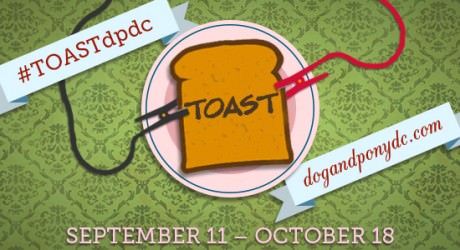 Toast plays through October 18, 2014 at venues around the DC metro area. For venue information and tickets, visit their website.