Playing in repertory with Mozart’s The Magic Flute – Impempe Yomlingo at Shakespeare Theatre Company is the season opener of their STC: Presentation Series – the passionate and innovative William Shakespeare adaptation Venus and Adonis (U-Venas No Adonisi.) Only two performances remain for a once in a lifetime opportunity to witness Shakespeare’s epic poem being performed by the searing talents of the award-winning South African theatre company, Isango Ensemble.

For those who take pride in their knowledge of William Shakespeare and their theatergoing, you have my word – you’ve never seen anything quite like this Isango Ensemble interpretation.

Using a Shakespearean empty stage, this imaginative musical rebirth of Shakespeare’s epic poem of love and seduction has never been articulated by singing the original English text interspersed with spoken and sung Afrikaans, isiXhosa, Sotho, Seswana, and Zulu translations. South Africa has eleven official languages, and five of the official indigenous and Bantu languages of the South African people are heard in Venus and Adonis (U-Venas No Adonisi.) I could get lost for hours in the thumping, beating, rhythmic choreography by Lungelo Ngamlana, the ululating uplifting chants of South Africa and their gorgeous harmonizing of their voices.

It is a fascinating aural experience – and then there is the music! Magnetic orchestrations by co-Music Director and Conductor Mandisi Dyantyis, from the eight wooden bar marimbas being played and the throbbing percussion of African drums, steel barrels, and the toasty, ebullient sound from the repeated blow of the kudu horn is a continuous joy ride. The unique mood and awakened atmosphere create a natural connection to one’s spirit.

Performed by a company of 24 singers and musicians, the kinetic energy and multitalented kaleidoscope of the Isango Ensemble expand the theatricality and dramatic characterization, plot, and language of the original work. This production of Venus and Adonis (U-Venas No Adonisi) makes Shakespeare’s tale of ancient mythology come alive and their larger-than-life qualities capture our imaginations.

The daring adaptation and bold direction of British-born, South African-based Artistic Director and Co-Founder Mark Dornford-May invigorate Venus and Adonis (U-Venas No Adonisi), transforming the elegiac 1194 lines of the long poem Venus and Adonis written in Shakespeare’s early creative years in1592–1593. Dornford-May has the uncanny ability to effortlessly expand the compelling narrative and visual fantasy by drawing out the heightened emotions and realism of the characters and situations in ways that charge your attention.

Dornford-May and Co-Founder Pauline Malefane (who also plays Venus) formed what is now the core of Isango Ensemble in Cape Town in 2000.  From the beginning the company has drawn its performers from the previously disadvantaged townships surrounding the city.  Mark Dornford-May and his team also won a Golden Bear for best film at the Berlin International Film Festival in 2005 for their filmed version of Bizet’s opera Carmen, called U-Carmen eKhayelitsh.

As one comes to expect from William Shakespeare, there is comedy as well as tragedy in Venus and Adonis. Dealing with desire and lust, the loss of innocence, and ultimately death, Venus and Adonis (U-Venas No Adonisi ) is set in an idyllic world where Venus, the Roman Goddess of Love is nicked by one of her son Cupid’s (Zamile Gantana) sharp golden pointed arrows. In classical mythology, Cupid is the god of desire and attraction.  This arrow fills Venus with uncontrollable desire, and the quest of her desire is none other than Adonis (Mhlekazi (Wha Wha) Mosiea.)

As the embodiment of love and sexuality, Venus is quite a character. In fact, Venus is such a enigmatic persona in this extreme Dornford-May vision, that it takes seven actresses (Pauline Malefane, Noluthando Boqwana, Bongiwe Mapassa, Zanele Mbatha, Zoleka Mpotsha, Busisiwe Ngejane, and Zolina Ngrjane) to portray all of the hues and personalities of this unforgettable character.  The Goddess of Love in this prevailing feminist piece is a powerful presence and she possesses the personality of every woman, encompassing beauty, fertility, sex, and love.

She is also a dominant seductress. There is no freedom from Venus’ lust and desire for Adonis.

Venus, attempts to seduce the young and beautiful Adonis, but his disgust with her amorous advances, cajoling, and begging keeps him constantly pulling away. He is mostly immune to her charms, but they share a moment.  Nonetheless, Adonis is more interested in hunting wild Boar (Luvo Rasemeni) with his friends than becoming intimate with her.  Adonis leaves for the hunt. Failing to keep him near, Venus spends a restless night of longing and worry that he will be killed. In the morning the sound of the boar horn alerts Venus to search for Adonis, when she is confronted with the figure of Death (Zebulon Mmusi).

The production takes a sharp attention-grabbing left turn when Death becomes a part of the story. The image of death has never been more terrifying, than the very real and horrifying Death that scourges the stage of Venus and Adonis (U-Venas No Adonisi.) Mmusi in this role is a marvel and Gail Behr’s intricate makeup/costume work – especially with the Death character is divine. The slithering, lithe skeletal body and white-face, soul-draining stares of doom (with a slashed mouth and a blood red tongue diving in and out of his mouth) as he slashes the air with two curved sickles in each hand is a nasty piece of work. Wow!

The mighty talents of Pauline Malefane accentuate the beginning and end the production of Venus and Adonis (U-Venas No Adonisi) as Venus the Goddess of Love. She carries a commanding aura, and her pleading cries and the urgency in her steely-eyed gaze expresses her swelling passion and the precision of her wanton will. 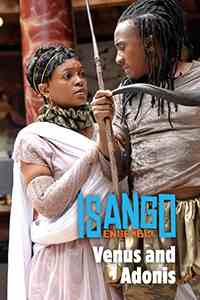 It is truly a raw, organic experience of pure theatre and powerful storytelling to experience the drama on the stage – not understanding much of what’s being said – and still be taken in, enraptured by what is seen and heard. There is certainly something to be said for having a full sensory experience.

As such, there are no surtitles with this presentation of Venus and Adonis (U-Venas No Adonisi.) And, as much as I was seduced by all of the sights and sounds (understanding only limited snatches of the English being spoken), I would have appreciated the availability to view surtitles. It’s a director’s choice. Fortunately, the program provided an extremely helpful synopsis; without it much of the story’s nuance and details would have been lost since I had limited familiarity with the Shakespeare poem.

Still, the lack of surtitles in no way takes away the power of theatre, originality, and emotional integrity of the production.

The Isango Ensemble has made a memorable lasting impression. Venus and Adonis (U-Venas No Adonisi) is sure to enchant audiences. I only hope in the near future that I will be able to see the expressive living theatre of this inspiring and challenging South African theatre company again.

Running Time: 1 hour and 35 minutes, with a 20-minute intermission.