The final stop on the Evita tour at The Kennedy Center is bittersweet for hometown stars, Sean MacLaughlin (Juan Peron) and Caroline Bowman (Evita). Both actors hail from our area, Sean, from Northern Virginia and Caroline, a Howard County Maryland native. They have been touring with the show for more than a year and spoke about the joyousness of coming home and the sadness of the show’s closing. We reached Sean during the Midwest engagement of Evita and more recently spoke with Caroline in Connecticut, the last stop before the DC run.

Carolyn: What’s it like coming back to The Kennedy Center where you had appeared before?

Sean: This is going to be quite an honor to return to The Kennedy Center. It was my home for many years. I took a summer intensive there when I was eight years old. I saw Phantom of the Opera there was I was 14 – a show that inspired me to sing. Years later, I performed the role of Raoul at the Center when I was an understudy on the Phantom tour. I was able to sink my teeth into working new pieces on the Millennium Stage, and I can clearly say I am the performer that I am because of the training and experience that I got from The Kennedy Center, Signature Theatre, and the DC theatrical community. Performing this role at the Opera House is going to feel like I’m singing The Little Drummer Boy for my family…I’m going to play my drum and, hopefully, the audience will smile at me.

Carolyn: So how many tickets will we need for family and friends?

Caroline: Oh, gosh, massive groups are coming every night. I think the Opera House will be filled with tons of family, friends and people who know me. I grew up in this area, and performing at The Kennedy Center is a dream come true.

Carolyn: You’ve been on tour with the show since late 2013. How will the closing of Evita affect you?

Sean: It’s truly sad that this tour is ending. It is one of the most beautiful productions in which I have been involved. I have been able to travel the United States with my family, giving my little boy experiences that few children have, and perform in a production that I believe is special. It’s been a fun ride!

Caroline: The closing will be bittersweet. There will be a lot of hugs on stage. Sean and I have been together for over a year. We’ve become close friends. I couldn’t imagine going out on this journey without doing it with him.

Carolyn:  When did you first get the theater bug? What is your first memory of being on the stage?

Sean: When I was little I remember watching a kissing scene on the television and telling my mother that was what I wanted to do when I grew up. I loved how the television took me to different places and created beautiful stories, and I wanted to be a part of that. So at the tender age of four years old I was performing in The King and I in Fort Lee, near where I grew up. My dad performed with me and my brother, and my mother helped with the costumes. And yes, I wanted to kiss on TV.

Caroline: I grew up in a nurturing theater community where I honed my acting skills. My mother is an actress who always encouraged me to follow my dreams of reaching Broadway. I joined my mother on stage at the Laurel Community Theatre but it was at Toby’s Dinner Theatre where I got my professional start as an understudy in two productions. Sue Miller, theater director at Glenelg High School, inspired me to “stretch my wings. She gave me parts as varied as Marian, the Librarian, in The Music Man to Rizzo in Grease. Sue has been supportive of my career from the beginning. She has become part of my family, a spiritual connection, and, hopefully, will be bringing lots of my Howard County friends to Evita.

Carolyn: Take us back to when you first auditioned to play Juan Peron? Where did you audition and what did you perform at your audition? How long was it before you received the call that they wanted you to play the role?

Sean: The who process took about three to five months as I had to prepare all of Peron’s material. I officially got the call to audition sometime back in February 2013, the day of my son’s birth. But my official notice of getting the role didn’t happen until July. My agent sent an email wishing me a happy July 4th and the offer to play Peron. It was probably one of the greatest emails ever received.

Caroline: I first auditioned at Pearl Studios in New York City, actually three months of auditions in a long, extended process of eight or nine sessions. I sang “Buenos Aires” and two other songs from the show. I danced, too. After my final audition call back, my tape was sent to Andrew Lloyd Webber. I was on my toes every time my phone rang.

Carolyn: How would you describe Rob Ashford’s choreography?

Caroline: I love it. It’s tango-based, all about the culture of Argentina. Tango is a language. It’s cool for theater because we are up there trying to tell a story. And Rob loves legs. There are lots of kicking and turning. “Buenos Aires” is one of the hardest physical numbers in the show. I am belting very high. I’m out of breath and I try not to show it.

Sean: Rob Ashford’s choreography is stunning. There is a reason for every movement and a story that goes along with it. The “Buenos Aires” number is Evita’s welcome to the big city.  Argentina is a proud, beautiful culture, rich with confidence and strength, and he captures this spirit in the dances. As much as I would love to dance that celebration, I am glad I have just my tango with Eva. Then I can watch them do that gorgeous number.

Carolyn: What advice did Rob Ashford give you that helped to shape the performance we see on the stage today?

Sean: Seth Sklar-Heyn and Chris Bailey are the tour directors. Seth was an assistant in the Broadway version, and Chris was the tour choreographer in London and New York. Kristen Blodgette is the musical supervision. A few weeks into the tour, director Michael Grandage came to see the Chicago show and was thoroughly impressed by our cast and the setting of his work. He gave us details on the history of how the revival came to be and how much the production means to the audience. It was quite an inspirational speech.

A few months later Rob Ashford came to see our production. He, too, was quite impressed and had notes for us about the show’s intention. It was fascinating to hear him talk about purpose and the story to tell. He gave me some very nice compliments on my performance and mentioned the word, “organic.” That’s what I strive for everyday since the beginning of the run and even more so after getting that note.

Carolyn:  What do you admire most about Caroline Bowman’s performance of Evita?

Sean: I have admired Caroline since day one! Having the DC connection makes our bond strong. It’s a joy to perform with her. She is professional and incredibly talented. It’s very rare that you find someone who is that consistent and hard working, all wrapped up in a beautiful person. It’s going to be hard to say good-bye to this production as well as the relationship Caroline and I have created on stage, but it is quite a wonderful thing that both of us can do our final bows at home.

Carolyn: Why do you think Evita is still so popular 34 years after opening on Broadway? And what do you hope audiences will take away after seeing Evita at the Kennedy Center?

Sean: Everyone knows the music, and for the few who don’t, won’t ever forget it after seeing the show. Evita’s story is one that touches the audience. Besides humming the amazing music, you walk away thinking.

The audience may parallel this show to any event that is happening our world right now. It’s a political show about the rise and fall of Argentina’s economy. It’s history. And I believe the lesson to be learned is look before you leap. Perhaps audience will leave reflecting on their own lives and the mistakes of the Perons.

Caroline: Evita’s story that will never be too old to tell. It’s fascinating how much this woman accomplished in her short life. She fought to the death. She was a true feminist. And her message is still relevant today.

I’m so proud of this company and what it has done with this show. People who aren’t expecting to be changed are moved. It’s magical the way we take everyone away to a different place and time. 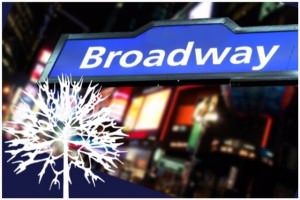 Caroline Bowman will make a guest appearance in Bringing Broadway To Columbia, an Evening of Music, Song & Laughter, a benefit gala for the Columbia Center for Theatrical Arts Monday evening, October 13, 2014 at Toby’s Dinner Theater of Columbia -5900 Symphony Road, in Columbia, MD. Doors open at 5:30 p.m. for the pre-show auction, trivia contest, buffet dinner, and performance. For details, call (410) 730-8311, or visit the CCTA site.