No More Yielding But a Dream

First things first – get thee to the new home for the Chesapeake Shakespeare Company (CSC)! Located at 7 South Calvert Street in Downtown Baltimore; they have built a beautiful space in which to create wonderful theatrical experiences. Already well known for their summer productions in the “Ruins” of Ellicott City, CSC will now offer a year-round season of plays (mainly Shakespeare, of course) in this new venue. The house evokes a modern Globe Theatre, and fosters a strong and exciting relationship between artists and their audience.

CSC has decided to stage A Midsummer Night’s Dream, as their inaugural production in their new home, and it is a fine option. As it is one of Shakespeare’s best-known and well-loved comedies, it provides excellent source material wherein real magic can be created. While it may also be considered a safe choice, Founding Artistic Director Ian Gallanar directs the production with flair, and infuses the 400-year old text with great joy and mirth. He guides the cast well in this new space, and creates moments of hilarity and tenderness.

The design team is firing on all cylinders. Costume Designer Kristina Lambdin has crafted a stunning array of costumes for this cast. While the fairy costumes are standouts, one of the most impressive pieces is Titania’s gown, which masterfully cloaks the actress in an ethereal light. The “Wall” costume from the Pyramis and Thisby scene is also a highlight. Lighting Designer Daniel O’Brien must also be commended for the textures his work has added to this production. The stark contrast between the bright sun of Athens, and the murky mischief of the woods are both represented very well. O’Brien also serves as the Technical Director and Scenic Designer for this production. Set pieces here are minimal, as CSC chooses to focus more on the text and acting – but O’Brien has crafted a fine environment for this company to play in. Music is also important to CSC’s productions, and the songs selected by Musical Director Scott Farquhar brought great life to the evening.

As for the cast, there are two standouts that must be mentioned. Playing the role of the “painted maypole” Helena, Audrey Bertaux is a firecracker. While many of her co-stars lose their handle of the language amidst some of the more robust staging, she never falters. Bertaux injects the role with great humor and passion, and is very magnetic to watch. Gregory Burgess plays the role of Bottom, and is a showstopper. The role can lend itself to much scenery chewing and hammy acting, but Burgess adds much more to his portrayal. While he is a master of the high comedy, he also is full of heart; there is great magic there if you are lucky enough to have him catch your eye in the audience.

Many other members of the cast should be commended for the strength they bring to the production. Rounding out the lovers’ quartet are Rachael Jacobs (Hermia), Travis Hudson (Lysander), and James Jager (Demetrius). Along with the aforementioned Bertaux, they are a fine team that instills the production with great fun and passion. The “Rude Mechanicals” are also a joyous bunch to behold. In addition to Burgess, Jeff Keogh (Quince), Bobby Henneberg (Flute), Matthew Ancarrow (Snug), Farquhar (Snout) and Robby Rose (Starveling) are a Dream Team. I won’t go into too many details about their “play” in Act V, since that might give away too much of the fun; rest assured that it is a standout moment of this production, and likely more exciting than you have ever seen it before.

Kathryn Elizabeth Kelly (Titania) and Scott Alan Small (Oberon) make a formidable couple. They both have an excellent command of the stage whenever they are on it, and bring both beauty and strength to these fantastical woods. While Vince Eisenson successfully adds the right amount of slime and smirking to the toadie Puck, he also has a wavering Southern accent that lacked consistency at this performance.

While there is much to adore about this production, a few elements could have been enhanced to help it soar. First, there were many pre-show vignettes that added some confusion to the proceedings. Also, once the “curtain” went up, the pacing remained very slow until Hermia and Lysander were left alone to have their first private conversation. Luckily, from that point on the night flowed quickly and smoothly.

Chesapeake Shakespeare Company’s downtown debut is a fun evening of theater. I believe that this company has the foundation for success in their new space, and I look forward to future productions. Do yourself a favor and enjoy a bit of Midsummer before it fades away. 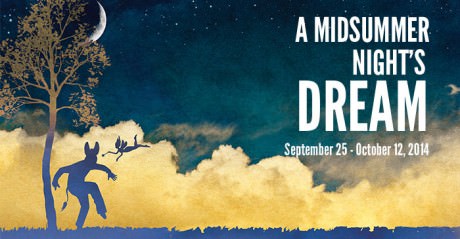