For those who are fans of folk music, there was only one place to be in the Washington, DC Metro area on Saturday night in order to be folkin down memory lane. The World Folk Music Association (WFMA) based in Washington, DC rented out the Clarice Smith Performing Arts Center at the University of Maryland on September 27, 2014 at 7PM, in a concert called Remembering Dick Cerri: A Celebration in Song. For 4 ½ hours, each audience member could be a part of a very special celebration in remembrance of past president and Co-Founder of the WFMA, Dick Cerri. Dick passed away almost a year ago on October 3, 2013.

Who was there? Let me throw out a few names (it’s like a “short” list of Who’s Who in Folk Music). To peak your interest in continued reading of this post, in attendance were: Peter Yarrow & Noel Paul Stookey from Peter, Paul and Mary,  Tom Paxton, Christine Lavin, Chad Mitchell, Jonathan Edwards, Modern Man members Dave Buskin, Rob Carlson and George Wurzbach, husband and wife singing group Steve Gillette & Cindy Mangsen, Anne Hills, Maine-based Schooner Fare (composed of brothers Steve and Chuck Romanoff), Denver-based Mack Bailey, Bill Danoff, Maine-based folk duo Dave Rowe and Troy R. Bennett, who make up The Squid Jiggers, Carolyn Hester, Doris Justis and Sean McGhee from local group Side by Side, and Donal Leace.  Accompanying tonight’s performers were four extremely talented musicians – Paul Prestopino who can play anything with a string, Percussionist Marshal Rosenberg, Guitarist Bob Hefferan and bass player Ron Greenstein. With a group of folksingers and musicians from all over the USA, Dick Cerri must have been a special asset, and he was.

Dick Cerri, “Mr. Folk Music,” was born in Utica, New York and started his career in radio with a CBS affiliate at age 16. Dick followed his older brother, Bill, (who was also a radio announcer to Washington), joining the local radio station WAVA. Dick then created a show called Music Americana, the Folk Music of America, and ran his program on a number of local radio stations including WETA. He was described by many as being jovial, warm and devilish, which built him a dedicated fan base. Dick ended up back at WLTT 94.7 on the FM dial, and utilizing his radio shows, the WFMA and local Music Americana Showcases, he enriched our lives with “our kind of music” over fifty years. I already provided you a list of those who were performing on Saturday night – adding to that list a few more that were on his shows — Judy Collins, Emmylou Harris, Gordon Lightfoot, Tom Rush, and John Denver. I personally remember the music showcase he put together at the Birchmere in Alexandria, VA., especially the one for John Denver, after the plane crash in 1997.

What made the evening special was snippets of the Radio show broadcast throughout the evening with Dick Cerri’s voice conversing with his guest folksingers over the years. Using that approach certainly brought a down-home reality to the evening. The extravaganza began on-time and Tom Paxton opened with “Last Thing on My Mind.” Chuck Morse, President of the WFMA, welcomed the packed crowd of approximately 500 folk music fanatics. Acknowledging that almost a year has gone by since Dick’s passage, the snippet from one of Dick’s radio shows illuminated a song called “Farewell Party” implying this was how someone’s demise should be commemorated in celebration of the accomplishments rather than in mourning. The WFMA Board of Directors used this as the underlying theme for tonight’s celebration.

Modern Man followed with two songs: ”Folk Music in the Nude” which was inspired from their visit to Virginia’s Avalon Nudist Resort, and “Like a River.” For me, the lyrics of this later song that were special were “What is Tomorrow if Today was Yesterday.” For those in the DC area, FOCUS is sponsoring a Modern Man concert on November 08, 2014 near Mt. Vernon, VA.

Steve Gillette and Cindy Mangsen met early in the 80s at a folk gig. The two eventually got married and have been “making” beautiful music together happily ever after. They sang “Bed of Roses” ably assisted by Anne Hills. Their melodic voices soared among the rafters of Dekelboum Concert Hall.

Christine Lavin had the audience in hysterics and in the palm of her hand on one issue which we can all identify with as we become “citizens of cyberspace.” Check it out …it’s called “The Password Song.” She shared with the audience that the lyrics are based on her own personal experiences and utilizes her actual passwords.

Peter Yarrow and Noel Paul Stookey performed “The Garden Song” and then “Day is Done.” As the two walked off the stage, their arms were around each other’s waists. It was a touching moment; the audience found out later that evening when Paul came back in Act II that Peter had to leave since he was ill. Mack Bailey was next on the agenda and he sang “Stewball.” Mack’s vocal range is amazing as was evident during his singing. Mack was joined by Side by Side in his second offering “Home.” Tom Paxton entered from stage right to share his tribute to Mr. Cerri – “My Ramblin Boy.” Chad Mitchell was introduced and with Tom Paxton’s together sang “Where I’m Bound.”

Chad Mitchell sang a solo dedicated to veterans, “who we owe so much and give so little.” The song is entitled “Brother, Can You Spare a Dime.” This is a depression era song from 1932 and its lyrics were written by Yip Harburg. Yip went on to write the music for the movie The Wizard of Oz,  released in 1939.

Side by Side just celebrated their 30th anniversary together. They sang duets of the Everly Brothers’ “All I Have to Do is Dream” and John Denver’s “Dreamland Express.” According to my Internet research, they performed the same song at the 11th Annual WFMA Benefit in 1996 hosted by Dick Cerri, the man of the evening. Bill Danoff joined Side by Side on stage to sing “Late Night Radio.” Side by Side departed allowing Mr. Danoff to serenade the audience with “Afternoon Delight.” In the middle of the song, David Buskin from Modern Man and Christine Lavin, who were on-stage, arose and began dancing together to Bill’s music. Soon after, the entire cast for the evening moved to stage center and joined together with “Friends With You.”

Anne Hills opened Act II with two train songs in harmonic magnificence – “Transcontinental” and “Pullman Porter.” For those who are Anne’s fans, she will appear at FOCUS Alexandria on October 11, 2014. As Schooner Fare began their gig by singing “Portland Town,” they shared a story about sending a tape to Dick of themselves singing with a note: “Please share this with the person who can advance our careers.” If it had not been for Dick making that happen by taking on the responsibility himself, Schooner’s career would have never advanced. Carolyn Hester followed with “That’s My Song” which she performed with her daughters.

Paul Stookey provided thoughtful insight at this point with his song “Nukes Are Nuts” followed by “For the Love of it All.” To end the evening, Jonathan Edwards sang “Sunshine” and the Youngblood ‘s “Get Together,” (“Come on People Now”) eventually joined by the evening’s entire cast. This song was used as Dick Cerri’s sign-off song that ended his Music Americana radio show each Sunday evening. What an appropriate way to end an evening dedicated to someone who earned his title – “Mr. Folk Music” and maintains it to this day. A folk concert can’t be a folk concert without an encore – Tom Paxton closed out the evening with the all the performers singing “Peace Will Come” and the entire audience rose from their seats to show their support of the heartfelt performance.

I hope in sharing with our readers the details of this special evening that you too gain an appreciation for the magic of folk art that brings our emotional consonance between thinking, music, and believing to action.

Running Time: Approximately four and a half hours. 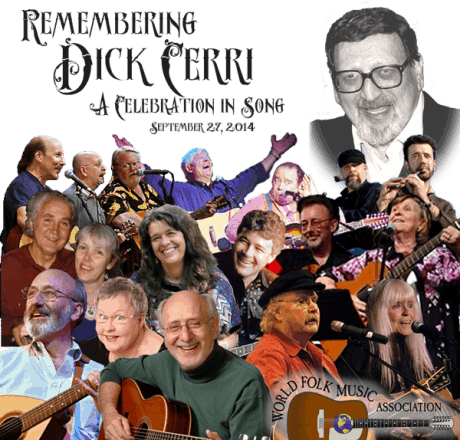