Down a dark alley where cats dodge cars and across from the Glenwood Cemetery is Boneyard Studios, DC’s tiny house community. It feels almost otherworldly or enchanted, stepping through the gate onto a path lit by white and red Christmas lights that weaves among a lush community garden, three tiny houses (the largest is 210 square feet), a very glamorous shed and a fire pit. Out of necessity everything is pristine and perfectly in its place, but rather than clinical it is warm and inviting. This is where Pinky Swear is doing their immersive production, The Tiny House Plays.

Audience members are colorfully divided into groups with a maximum of eight people per group. Each group has a specific route to take to see each of the five 10-minute plays and rotates to their next location at the ringing of a bell. Audience and cast, in character, mingle preshow building a sense of community.The group I was with started at the fire pit with Donna Rachelle’s Days Gone By, a bittersweet bit of loveliness about a family, played by Kimberly Wilson, Dexter Hammett and Georgia May Lively, dealing with loss. A song played on the ukulele, the perfect tiny house instrument, underscores their attempts at moving on.

We next moved to the Studio Shed for Girls and Women by Thembi Duncan. Ambiguity is in the air as a couple … of friends? played by Lilian Oben and Stephanie Svec prepare for a slumber party as one of them turns 40.

On to Pera House for the laugh out loud funny Big Bread by Laura Zam. Alexis Graves and Gray West are both super fun as, respectively, a ghost on a learning curve and her still living boyfriend who, oops, accidentally killed her, but Nathan Alston steals the show here as a jive ghost from the ‘70s with charisma to burn.

Next was Ann and Shawn Fraistat’s Josie, June and Death at the Matchbox. Allyson Harkey and Melissa Hmelnicky are wickedly funny as a pair of lovers as one of them tries to hide from the other that she actually sees death stalking her. Kevin O’Reilly plays the taunting death with a, er, deadpan that’s, um, to die for. Bookending my experience was the sadly sweet For Emma by Danielle Mohlman about two lovers, played by the earnest Christian Campbell and Clarissa Barton, who are on the verge of splitting up. Again a beautiful and heartfelt ballad, this time on electric piano, brings it all home. 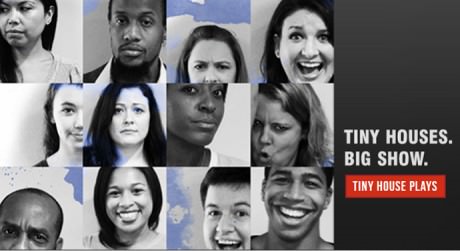 Connection is key to The Tiny House Plays.The plays themselves are connected as a character from one gossips about the neighbors and a character from another mistakenly stops at the wrong house, but the deeper connection is to the actors. It’s hard not to feel connected to them in a palpable way as you’re literally sitting in their living room watching their life unfold. Kudos and thanks to Pinky Swear, Director Jessica Aimone and the cast and crew for this unique experience.

The plays and the houses in The Tiny House Plays they’re in may be tiny, but their hearts are huge!

The Tiny House Plays plays Saturdays and Sundays through October 12, 2014 at Boneyard Studios – 21 Evarts Street, NE, in Washington, DC. Tickets are limited to 40 per show and only available online.

LINKS A ‘Tiny’ Interview with Director Jessica Aimone of ‘The Tiny House Plays’ and Playwright Danielle Mohlman by Chris Griffin.