I got a chance recently to chat with Blair Witch Project director Eduardo Sanchez and screenwriter Jamie Nash about their new found footage horror movie EXISTS which screens Friday, October 10, 2014 as part of the Spooky Movie International Horror Film Festival at the AFI. 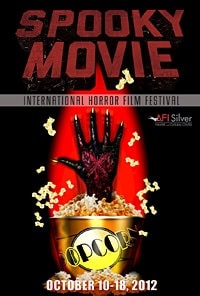 EXISTS has been playing the festival circuit right? Weren’t you all at SxSW?

Jamie: I didn’t go but the movie won the audience award there.

Eduardo: It was great. I was shooting in Vancouver but heard it went well. Like Jamie said we won an audience award with plenty of stiff competition.

Tell us about EXISTS.

Eduardo: Five young adults go in the woods to a cabin they’re not supposed to go to and do stupid things. Basic story but then we add a SASQUATCH! And stir for 84 minutes. It’s quite a ride.

Eduardo: Because he’s the beast among beasts. I’ve been obsessed with Bigfoot since I saw the Patterson-Gimlin film.

Jamie: I’ve been obsessed since The Six Million Dollar Man.

Jamie: The big man was a big deal when we were kids. In Search Of …

Eduardo: Nothing scared me more than BF as a kid and I wanted to bring that to modern audiences. Legend of Boggy Creek.

Jamie: I had a BF action figure.

Eduardo: I still have one.

Sweet! Why do you think Bigfoot is scary?

Jamie: Mostly – it’s a myth that many people – most – believe is real. People have had encounters. People believe.

Well there’s that creepy footage (the Patterson-Gimlin film) and wasn’t Leonard Nimoy the host of In Search Of … Leonard Nimoy wouldn’t lie to us.

Eduardo: I think it’s scary, it’s in the woods. It hides. It’s big. And it’s totally believable that some missing link has survived into modern times. Some kind of man-ape from the past continues to live in the woods. It’s just real enough to creep you out. The possibilities …

Wouldn’t that be more sympathetic than scary? A stranger in a strange land.

Eduardo: Yes to a certain point. You feel bad for it. That happens in EXISTS as well, but because it’s huge and imposing and bigger than us it’s scary.

Jamie: The woods is one of the few places left that’s isolated too. You get attacked in the woods, you’re in trouble.

Eduardo: Especially in the woods at dark.

Jamie: I think Bigfoot has a King Kong-like quality to him.

Eduardo: Yes he does, and we bring that out in the film.

Jamie: The person I was sitting next to in the last screening cried. She had tears in the end. She screamed loud and crazy throughout but when the credits rolled she had tears.

Jamie: Don’t put that on the poster. It’s Friday the 13th meets Beaches.

Speaking of posters, did you guys do any cool viral marketing for this one? I still have a missing flyer from Blair Witch.

Eduardo: We did a little bit, and have a few more things we’re about to come out with but nothing big. You need big marketing budgets to do stuff like that these days.

Jamie: Yeah, you can punk your friends with it.

Eduardo: Well this may be the last one I ever do. I thought long and hard before this ended up that way, but I figured if I was going to do another one it may as well be about Bigfoot!

I think the most effective FF movies are the ones that feel real. Like Blair did. I think that’s why Paranormal Activity is so effective, but I tend to gravitate towards the ones that don’t really pretend to be real, just as a personal preference, like Cloverfield or Troll Hunter.

I still can’t get through the original Texas Chainsaw Massacre.

Jamie: It’s one of those movies that feels like you’re in the hands of a madman and there are no rules. It feels like there’s nothing that can’t happen.

What attracts you to the horror genre?

Jamie: For me, I’ve always had a dark sensibility/sense of humor. I feel ‘horror’ can be all kind of stuff. It has a ton of sub-genres. The key ingredient seems to simply be ‘dark’.

Eduardo: Well, I like the flexibility of it. There are many ways you can go with it, be as serious or almost as goofy as you want. Action, comedy, dark thriller etc. – so many sub-genres of horror, a lot of room to play.

How did you guys end up working together?

Eduardo: I read a script of Jamie’s called Probed and that was the end of it. Then I found out he lived 45 minutes from me.

You’ve been a DIY filmmaking auteur with the found footage and viral marketing with Blair Witch and, though not so new now, the simultaneous theatrical and Video On Demand release with EXISTS. What do you think the next big DIY filmmaking thing will be?

Eduardo: I think someone is going to make a film COMPLETELY outside the studio system – even self-distributing and hitting VOD and theaters on their own – that is going to blow up and that will change things.

Yeah, why isn’t there a Bandcamp for filmmakers?

Eduardo: Exactly. There are many resources out there just waiting for someone to put all the pegs in the right places. Problem is that most filmmakers don’t want to be distributors. So we wait …

Yeah, but following that Bandcamp model folks are now making careers by doing it all with the help of the internet.

Eduardo: I see the day when filmmakers will be able to go to their audience and bring them in on the financing – have the audience pre-buy the film and be part of the process – marketing and casting and everything. The kickstarter stuff (Veronica Mars) kind of shows it.

Jamie: Certainly Tarantino or Nolan could get all the $$ they want in pre-orders.

Eduardo: Right, but I’m not saying just collect money and say goodbye. Keep the investors in the loop about everything. Let them decide posters, design elements, even trailers – put some raw footage up and have people cut trailers.

Do you guys know about Joseph Gordon-Levitt’s hitRECord? He’s sort of doing that now – crowdsourcing the actual product. I think he’s financing it but he’s keeping it tight and small.

What actually scares you?

Jamie: Diseases and your own body betraying you. I think that’s why I tend to write possession movies and in some ways why people like zombies.

Eduardo: A lot of stuff – the woods of course.

And yet you keep going back there!

Eduardo: Have to face my fears! We’re going to the water and a mall in our next films.

I was going to ask what’s up next?

Eduardo: Have five films that are lining up right now but we don’t know which one will be first. It’s good but none of them have been green-lit so you never know …

Jamie: I have a kids’ movie coming out on Nickelodeon this Christmas. And it’s found footage! It’s called Santa Hunters and it will be out around Thanksgiving.

Jamie: Trade out Sasquatch for Santa.

Eduardo: And hoping to get a TV show going next year. We’re getting close.

That’s awesome that you’re having this kind of success and you’re not living in LA!

Eduardo: It’s a pain sometimes, have to go to LA a lot. But we like it here.

Any last words about, anything really, but specifically EXISTS and the screening at Spooky Film Fest?

Jamie: Definitely check out Spooky Film Fest. I had a film play their first fest – Two Front Teeth. It’s a can’t miss horror fest. It gets better and better each year.

Jamie: And if you do miss the screening EXISTS will be playing Owings Mill, MD as part of its theatrical run, or VOD. Makes a fun Halloween date night.

Eduardo: There’s also a Blair Witch/EXISTS double feature on October 30th in Frederick. We are planning it now.

EXISTS will screen as part of the Spooky Movie Film Festival on October 10, 2014 at 7:10 PM at the AFI Silver Theatre – 8633 Colesville Road, in Silver Spring, MD. A Q&A with Director Eduardo Sanchez and screenwriter Jamie Nash follows the screening. Tickets are available at the door and online.