A short drive on Greenspring Avenue through the autumn trees that leads to the Hannah More Arts Center on the campus of St. Timothy’s School is a hidden gem: Charm City Players. Founded in 2011 as a 501(c)(3), Stephen and Chrissy Napp are celebrating Charm City Players’ 1st birthday with three successful shows – Annie, Legally Blonde, and The Sound of Music, that closed to glowing reviews. Now in rehearsals for The Wizard of Oz, we chatted for 90 minutes about Charm City Players’ first year, their experiences in the theatre, and what the future holds for them and Charm City Players.

Danielle: Introduce yourselves to our readers. How did you two meet?

Stephen and Chrissy Napp: We are native Marylanders and met backstage at Babes in Toyland. Three months later, we were in Sound of Music together at a local dinner theater.

When were you first bitten by the theatre bug?

Chrissy: My mom entered me into a pageant at the age of six months and I have been on stage ever since.

Stephen: I was 12 years old when my mom enrolled me in Saturday theater classes as an activity. In the eighth grade, I was cast as Tom Sawyer’s half-brother Sid Sawyer and eventually I played Tom in a future production.

What are your favorite roles you played and why?

Chrissy: I played Ado Annie in Oklahoma! opposite Stephen who played Will Parker.

Stephen: We did 3 separate runs of the show – 1st – we were dating; 2nd – we were married; and then the 3rd time around Chrissy was pregnant. Oklahoma! is the fabric of our relationship and how our son got his name, Parker.

How did Charm City Players begin?

Stephen and Chrissy: We saw the need and realized we had talked about it ever since we first met. We talked often about how to do it, what to do, and after getting through the 1st year as parents and surviving with little to no sleep, we realized it was time to launch our dream.

What does the Charm City Players name mean?

Stephen: We lucked out that the name was available. It just worked out that way… and so did the space. It was a little blurb in Baltimore Magazine that Pumpkin Theatre was moving out of St. Timothy’s so I called Anne Esposito at St. Timothy’s. I had been on this stage in the late 1970s so I knew the space. Three days later we signed a contract. It happened that fast.

How has your initial vision changed now that you have produced shows at Charm City Players?

Stephen: It’s reaffirmed from the very beginning the need for a family theater outlet for the children in the Baltimore area. The response from Annie was overwhelming, confirming our vision. Countless grandparents brought their grandchildren to the shows and that has become our biggest audience. It’s the grandparents sharing what they experience 40 years ago and it creates a special connection between then and now

When you are producing a show what is the most fun and what are the biggest challenges?

Stephen: The biggest challenge has been the same problem with most Baltimore productions, is getting men to come out and audition.

Chrissy: The most rewarding are the families that participate with their children in the show; mom helps with the costumes or dad takes on a role. Siblings, twins – it’s a family affair.

Stephen: We have a nucleus of families that perform on a regular basis.

Chrissy: Their families have become part of our extended family.

Have you ever felt like all this isn’t worth it and it’s time to do something else?

Stephen and Chrissy: (shaking their heads) No!

Stephen:  It’s the opposite. It’s the times when we were doing other things that we knew we should be doing theater.

If there was one role or show you could produce, or star in, what would it be and why?

Chrissy: Annie Oakley in Annie Get Your Gun. She’s so feisty (Chrissy laughed).

Who inspires you? (Dead or alive?) Theater and non-theater? Where does your love for the theater come from?

Chrissy: My material grandparents [and of course my parents] really fostered my love of musical theater, who are now gone and did not get to see this [Charm City Players].

Stephen: My mom started me in the performing arts classes and has too since passed.

If you could have dinner with any legend, who would they be, why would you like to meet them, and what would you serve them for dinner?

Chrissy: Judy Garland who has been my idol since I was a little girl and I would take her out for the best seafood in charm city.

Stephen: Charlie Chaplin because he was my idol growing up and I would like to take him to Little Italy.

Where do you see Charm City Players 5 years from now?

Stephen: We would like to be in our own theater space which would afford us to be able to do more shows during a season, since we share our current space. Ideally, a family dinner theater year round is our ultimate goal.

What’s coming up this season and why should our readers come to Baltimore to see your shows? 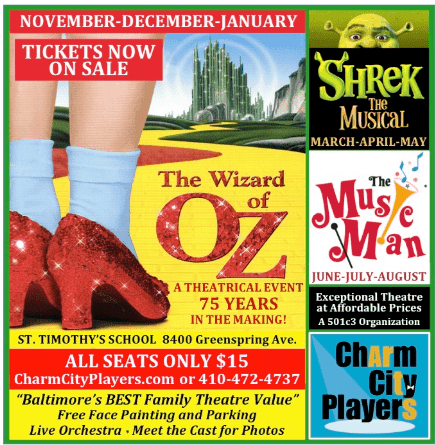 Stephen and Chrissy: The 75th Anniversary movie version of Wizard of Oz –on stage runs November through January. Shrek – The Musical is our spring production  playing in March, April and May,and is followed by The Music Man in the summer.

Stephen: These are big draws for all generations and they have a wide appeal for all ages.

How can theatergoers learn more about Charm City Players and purchase tickets?