There’s some monkey business about to happen at The Arts Barn in Gaithersburg, MD and  InterAct Story Theatre‘s Executive/Artistic Director Ali Oliver-Krueger fills us in.

Joel: How did you and Arts Barn get together to produce the show at Arts Barn?

Ali: We’ve been a professional touring company for many years, taking our act on the road, performing in schools and community venues. We love touring, but we also wanted to put down some roots in our local community, and start producing a non-touring season. So, when the opportunity to partner with the Arts Barn presented itself, we jumped at it! It’s a new venture for both of us, and we’re all excited to see where this will lead.

What is the show about and what lessons will children and adults learn while watching it?

In Not My Monkey, we meet Tekla Zaba, who has just taken over the Cyrk Zaba, the Polish traveling circus that her parents started. She has all sorts of amazing new ideas and is excited to get everyone working together. Unfortunately, things are off to a rocky start: there’s chaos backstage, the older acts resist change, and no one wants to listen to Tekla. To make matters worse, the monkeys break loose and start running wild all over the circus and all over town. Yet, whenever Tekla desperately tries to get help with this new monkey madness, people just tell her: “Nie mój cyrk, nie moje małpy”….“Not My Circus, Not My Monkey, Not My Problem! YOU fix it!” So how can Tekla get people to work together to save the circus? How do you solve the problems of any community—a circus, a school, a town, any community—if everyone thinks it’s someone else’s problem to solve?

This led us to the old Polish saying “Not My Circus, and Not My Monkeys” that inspired the title. It’s a great saying that basically tells us that we really don’t have to take on everyone else’s problems or stress ourselves out trying to fix everything around us. But what if we took that attitude about everything, or what if everyone decides that this situation is just ‘Not Their Monkey,’ and that it’s up to someone else to do something about it? The circus folk and the townspeople in our play wrestle with just this question, and we’d love the kids and adults in the audience to join us as we figure it out together.

Introduce us to the cast fhe show and tell us what you admire most about their performances.

We have a terrifically talented and funny cast playing several different roles throughout the play. Two of our company, Anna Jackson and Jack Novak, are reprising the roles they created in our original touring production. Anna plays Tekla Zaba, the beleagured circus leader trying to bring her family circus into the 21st century. Jack plays several different characters, including a hipster clown and Mariusz the Magnificent, a knife thrower who’s been around since Tekla’s father started the circus. Mariusz is resistant to Tekla’s new ideas, and doesn’t see why he should listen to someone he’s known since she was in diapers, anyway. These roles were originally written for Anna and Jack, and they both had a huge part in shaping the original production—so it’s really fun to see them back onstage playing off of each other.

We’re also delighted to welcome new company members to our cast. Like Jack, Alani Kravitz plays many different characters, among them a gym-rat clown, a glamorous bearded diva named Delia the Dazzler and a magician who always performs with dramatic flair and style…if not always with skill. And finally, this year we welcome our newest and youngest company member, Sarah King, who coincidentally plays the newest and youngest clown at Tekla’s circus. Sarah and Alani both have a gift for physical comedy, and we’re tickled pink that they’ve joined us for this romp!

When did InterAct Story Theatre begin touring? And what other shows have you taken on tour?

InterAct Story Theatre is a professional touring theatre for young audiences and a multidisciplinary arts-in-education organization. We started touring in 1981 under our founder Lenore Blank Kelner, bringing performances and arts-based learning opportunities (classroom workshops, artist-in-residence programs, and so on) to families, schools, and communities throughout the region and across the country, and have gotten to perform in some pretty great houses. This year, in addition to Not My Monkey, we’ve just launched a tour of a brand new play called The Hero of EVERYTHING. It’s about a superhero who really struggles with working as part of a team, because she’s positive that she can do everything herself. So basically, it’s about someone with the opposite problem of our heroine in Not My Monkey!. The Hero of EVERYTHING features three of the actors in Not My Monkey—Jack, Anna and Sarah—and is touring now, and is available to be booked in schools, libraries and community venues. More information is available by emailing info@interactstory.com or checking us out online. 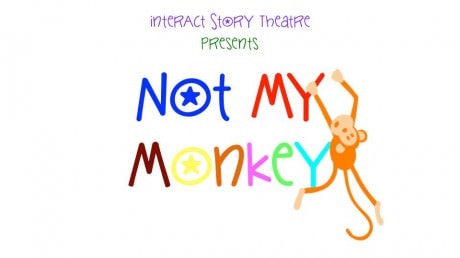 How long is the show?

The show is roughly 50-55 minutes long, depending on audience participation. All of our shows are highly interactive, and this one is no exception! At one point in the show, the monkeys have become such a problem, that the Town Council calls a Town Meeting so everyone in the audience can pretend to be citizens and circus workers, air their grievances over what these monkeys are doing in this imaginary town, and try to come together to brainstorm solutions to our problem (Hint: the monkeys aren’t the actual problem!). The actual running time of the show shifts a little each performance depending on how much the audience participates, but it typically runs between 50 – 55 minutes.

What do you want children and their parents to take with them after seeing the show?

We would love for parents and kids to talk about the play and kick around some of these ideas after the show. We included some discussion ideas in the program to help spark some of those post-show conversations. We also hope everyone in the audience—adults and kids alike—with have a great time laughing and playing along with the actors on stage. In our shows, everyone gets in on the act right from their seats…so on any given day, we might have as many as 104 actors at the Arts Barn. That’s a big part of the fun for us onstage…seeing the audience really getting into it and acting right along with us. The more, the merrier!

Not My Monkey plays from October 11-26, 2014 at The Gaithersburg Arts Barn — 311 Kent Square Road, in Gaithersburg, MD. For tickets, purchase them online.