Oedipus the King has long been considered the archetypical tragedy. Jam packed with irony, Sophocles lays bare the heartbreak of the human condition. People and especially the ruling elites, no matter how smart they are or determined they be, cannot alter the inevitable cascade of events that the Athenians called fate. 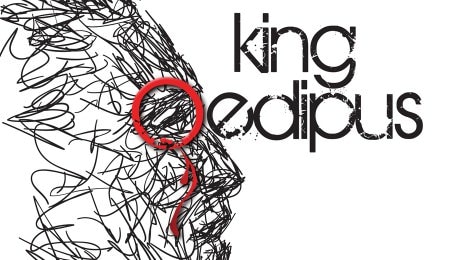 Catholic University’s MFA directing candidate Orion D. Jones has tackled the classic masterpiece in a new production at the Callan Theatre. Working with his young cast and production team, Jones creates visually dynamic scenography even if, on occasion, the production slips into a strained emotionalism that clouds the play’s overall intent.

Using an alley staging and three-quarter masks, this production used the highly poetic version of the text by the great Irish poet William Butler Yeats.

The story is generally well known, even to a non-theatre going audience.

Oedipus, a man known for his superb intelligence and analytical skills, finds his city of Thebes ravaged by a plague. At wits’ end, he consults the Oracle of Delphi for answers. The results are grim. The plague is divinely inspired, sent as a curse for an old crime: it will not abate until the murderer of Thebes’ previous ruler, King Laius, has been punished. The problem is: the murderer of Laius is none other than Oedipus himself.

To be sure, the drama of Oedipus is very much the psychological drama of its title character. The teenage Oedipus learns in a bar that according the prophecy he will murder his father and marry his mother. Distraught, he decides to flee Corinth, the land of the parents. On the road, he encounters a small group of travelers who do not want to share the road.  A confrontation ensues and he kills one of them.  At the gates of Thebes he runs into the Sphinx, a nasty creature with the body of a lion and the head of a human. The creature has enslaved Thebes and only a visitor who answers its riddle can free them (as well as save himself from being eaten).  Oedipus answers the riddle, safes the city, and becomes King by marrying Jocasta the Queen, whose late husband  Laius…. What Oedipus does not know is that Jocasta and Laius received the very same prophecy: their son will murder his father and marry his mother. They order their number one shepherd to take the baby away and kill him. The shepherd takes pity on the baby, however, and gives him up for adoption.

And that’s all in the back story. The power of tragedy lies in its focus on the waning few hours of the tale. Thus, the intensity of the catharsis is magnified a thousand fold.

The drama of Oedipus the King rests on the process of Oedipus coming to terms with who and what he is. That truth is a terrible discovery, and like any terrible truth, denial is rampant: hence Freud’s use of the Oedipus myth as a key ingredient to his theory of the unconscious.

Graham Pilato as Oedipus has the most demanding and psychologically complex role in the tragedy. Jones’ decision to use masks required that Pilato translate the character’s psychological complexity into nuances of speech.  Pilato’s portrayal focuses, however, more on Oedipus’s highly emotional subtext. That choice does not allow for subtlety of diction and intent.  Thus, in this production the audience experiences the emotional fury of the situation and not the intricacies of Oedipus’s ego-play–lying to self, rage at the world, denial of the obvious, belief in conspiracies, etc.

The principle supporting actors did a fairly good job with Yeats’ poetic language. Amie Cazel portrayed Oedipus’s wife and mother, Jocasta, ironically portrayed as pregnant with another child.  Her Jocasta combines a ferocious concern for her kingdom with a well-placed panic. Seth Rosenke’s Creon was articulate and demonstrated emotional restraint; Rosenke created the most fully developed character. He also had one of the best masks, designed by Tara Cariaso. Latia Stokes performed well in the role of the blind seer Tiresias, as did the leader of the chorus, Joe Weber, which in this production looked very much like a Catholic monk.

To this end, Jones added a meta-text to the production. These book-ends had Christian overtones and seemed to suggest that poor Oedipus might have overcome his fate if only….

Rounding out the cast was Camille Greenfield as Oedipus’s youngest daughter Ismene and Kelsey Murphy as the soon to be famous Antigone (she has a wonderful Sophoclean tragedy named after her).

Anyone interested in tragedy or classical theatre, a production of Sophocles’ tragedy in a necessary introduction.  Tightly constructed and rich with imagery and psychological complexity, the story of Oedipus moves forward as inevitably as a nightmare.

The audience knows where that story is going long before Oedipus accepts its grim destiny. Thus, our interest as viewer lies totally on what the story reveals about humankinds’ seemingly endless capacity to think magically.  Just as Oedipus denies his assured endgame and assumes his intelligence will somehow save him, so we have our own harsh truths and our own hopeful egos doing their thing to help us avoid what we do not wish to see.

That essentialness is why Oedipus the King continues to be produced and will continue to be relevant even in this age of viral videos, super computers, and geniuses for every think-tank.

Oedipus the King plays though this Sunday at Catholic University’s Callan Theatre – 3801 Harewood Road, NE, in Washington, DC.  For tickets, purchase them online, or at the box office.