A number of orchestras and ensembles in the Washington suburbs are looking to graduate from pure local or community status to regional recognition. There’s nothing like using one of the biggest pieces of “ear candy” in the classical music repertoire to help move the process along, particularly when you have the right people to pull it off.

On Saturday night the McLean Orchestra opened its season with a program featuring Washington-based piano virtuoso Thomas Pandolfi, who delivered an exhilarating performance of Sergei Rachmaninoff’s magnificently tuneful Piano Concerto No. 2 in C minor. Chock full of melodies that are by turn dramatically declarative and achingly evocative, the 1901 “Rachmaninoff Second” is a warhorse of piano competitions that tests the limits of both a pianist’s sheer physical prowess and his or her innate musicianship. It features a nearly continuous display of dense writing that requires the pianist to pull each melody out from within a line of notes flying around the keyboard both above and below the melody itself.

What Pandolfi achieved with the McLean Orchestra was a rare mix of technical accuracy and cool confidence that created a masterful path through the concerto, shorn of the nervous tension that often accompanies watching highly “trained” young pianists attempt the most difficult music. Typically Pandolfi would begin a line with a powerful bass pulse that would impel the music forward and finish major passages with an easy flourish worthy of a ragtime or pops performance. Pandolfi and the orchestra’s charismatic conductor Miriam Burns also clearly planned major touch points of the Rachmaninoff concerto to preserve its start-to-finish drama rather than produce disjointed pieces of “business” just to display the pianist’s chops.

In one notable moment near the end of the concerto’s first movement, Pandolfi deftly tucked a four-octave piano countermelody into the full orchestra’s restatement of the first half of the concerto’s opening theme. On recordings, this moment often features the pianist pounding away at the countermelody in full show-off mode, leading to a delay in the listener’s recognition that the orchestra is reprising the main opening theme. With the way Pandolfi and Burns handled it, the orchestra’s dramatic presentation of the melody shone through so that when the piano switched from countermelody to take over the second half of the main melody, the effect was seamless, comprehensible and satisfying.

Pandolfi also managed a trick that eludes even some celebrated pianists with Rachmaninoff’s music, which is to avoid transferring the power of the concerto’s thunderbolt concert-grand bass notes to the top notes, which can lead to harsh pings as lines fly up to the highest of the 88 keys. By gracefully teasing out melodies and countermelodies, as well as luscious rolling chords in a late passage of the concerto’s gorgeously lyrical second movement, Pandolfi kept what could otherwise come across as percussive playing within the melodic structure of the full concerto.

Maestra Burns assisted by continually leading the orchestra’s brass instruments, especially its French horns, in apt swells and retreats on long notes accompanying some of Pandolfi’s most virtuoso passages. When the third and last movement closed on one of classical music’s most iconic moments, a monumental final restatement of the Rachmaninoff tune that later in the 20th century became the Frank Sinatra hit “Full Moon and Empty Arms” (later covered by Eddie Fisher, Robert Goulet and Sarah Vaughan), the effect was one of logic and completeness.

The Rachmaninoff piano concerto keynoted a Russian-themed program that also included Tchaikovsky’s sixth and last symphony, also known as the “Pathetique” Symphony, and an opera prelude (or overture) by Tchaikovsky’s 19th century contemporary Modest Mussorgsky. At the top of the program, Maestra Burns tied the entire program together for the audience, noting some of the distinct personal struggles against which both Tchaikovsky and Rachmaninoff composed some of their most representative music.

She also diplomatically gave the audience some important clues to listening to the program, pointing out that Tchaikovsky’s Pathetique Symphony goes from some of the highest highs to the lowest lows of emotional content, poured into an unusual structure where the third of four movements sounds like it ends the entire piece on a triumphant note, only to surrender to a dramatic new theme which pulls the composition into a devastating final movement. 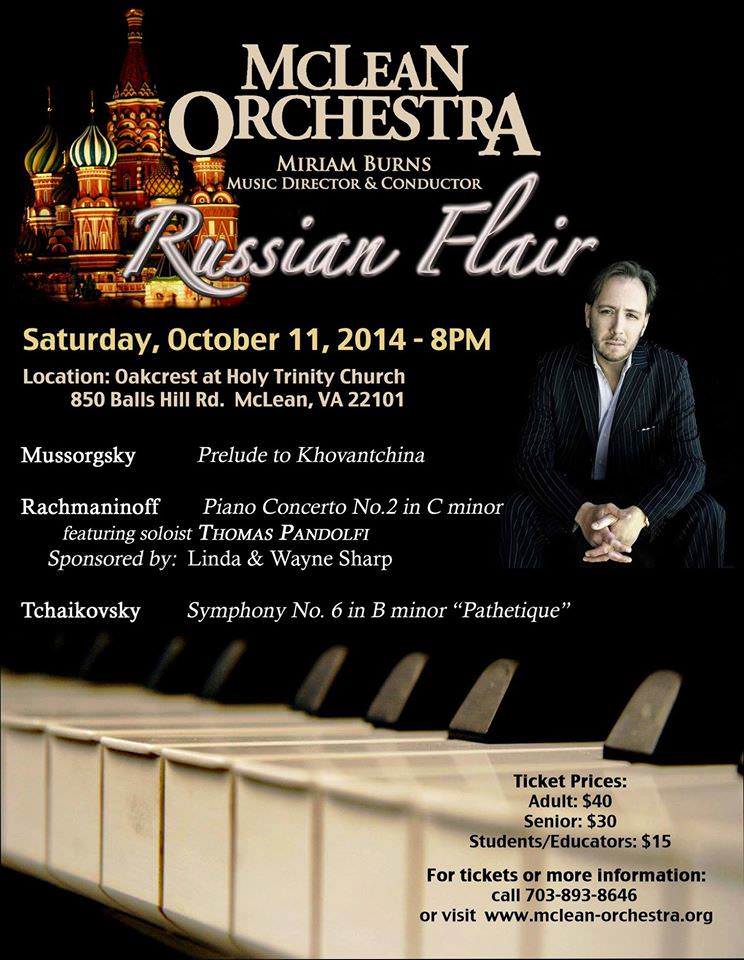 Her commentary paid off as the audience was prepared for the “false ending” of the Tchaikovsky and later waited in hushed silence for about 20 seconds at the actual dying-away end of the piece before surrendering to applause. Along the way were special passages worthy of note by the orchestra’s viola and cello sections, some terrific “anchoring” of the brass sections by bass trombonist Dana Landis and tuba player David Porter, and some especially beautiful flourishes by one of the orchestra’s most noted members, principal flutist Amy Thomas.

The McLean Orchestra does face a challenge, as it freely admits in the program, with its current performance space at the Oakcrest School in McLean. The unusual, hexagon-shaped stage and semi-circular, wraparound house of Oakcrest’s concert hall requires some odd stage set-ups and creates some slightly squirrelly acoustics. In this environment the violin section often does not quite deliver the creamy sound that this Romantic-era and (very) early 20th century music begs for, and the percussion instruments, under the long-time, versatile leadership of Craig Teer, sometimes “pop” too much against the orchestra compared to the orchestra’s past venues.

Perhaps some anxiety about securing another space helps explain the one truly discordant note of the evening, which was an opening monologue by the president of the orchestra’s Board of Trustees, Paul Frank, clocking in at an excruciating 14 minutes. From introductions of everybody involved with the orchestra except the musicians (such as the entire board of trustees), to pushy demands that the audience participate in an intermission auction, to hawking tables at an expensive gala set for much later in the season, the underlying theme of Mr. Frank’s soliloquy was trying to everybody to spend more money than they already had to buy tickets in a way that vastly exceeded the usual, light funding pitches at the top of performing arts programs. The extensive delay before a single note of music was sounded even seemed to lead to some bobbles in the opening moments of the Mussorgsky prelude from instruments that may have gone “cold.”

If classical music is going to make it in our area, it will come from young people of moderate means who become fans of the McLean Orchestra and other ambitious groups who are there to hear the music for the first time, not to be upsold to other products. I might suggest to Mr. Frank that while there are plenty of other times and places to do major fundraising, an orchestra’s concert evenings should be about the music and not the money – even in McLean, Virginia.

David Rohde is a local pianist, conductor, arranger, vocal teacher and writer who has worked extensively in Washington area musical theater. Most recently he appeared as musical director and conductor of The Arlington Players’ April 2014 production of The Most Happy Fella. David particularly enjoys watching musicians and actors he’s worked with “make it” when they pursue regional and national performing arts careers. David is a seven-time nominee and two-time recipient of the WATCH Award for Outstanding Musical Direction.