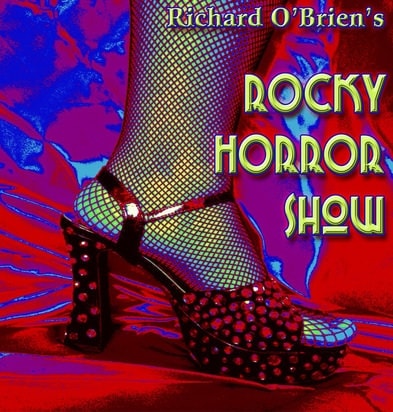 Spotlighters’ production, directed by Gregory Bell with energetic musical direction by Michael Tan, starts off with a ritual familiar to aficionados of late night showings of the movie: bags of goodies are peddled to the audience to aid in their ‘participation’: “Buy one, they’re only $5. Don’t bring your own bread, glitter or hot dogs to toss. One wouldn’t want the cast the tumble from their high, high heels.”

The costumes by Todd Douglas are truly a pleasure. In the first act Janet (Bridget Linsenmeyer), goes through two costumes, both of which appear to be truly vintage and exactly like a “proper” lady of the time would be seen out and about in. Garret Zink who plays Frank, may just be one of the ablest men to walk on heels. As the show progresses his heels get higher and higher and his corsets get more and more decadent. The Phantom Corps goth dungeon-style costumes are amazing to behold and give the beholder an eyeful.House band, named Stilborn Unicorns or the Dead Band (depending on who’s doing the telling), were a startlingly impressive accompaniment to the night’s singing and dancing. The Dead Band also provided pre-show music, including accompanying an audience member in an impromptu, hip-hop version of “Mary Had a Little Lamb” which was surprisingly good. Led by Michael Tan, keyboardist and Musical Director, the musical interpretation was innovative and inspired. “Eddie’s Teddy” performed as a country ballad was an unexpected, but intriguing twist.Director, Greg Bell knows how to play to his audience. His staging of the scenes in Frank’s laboratory were particularly in inspired. In every part of the room a different part of the drama unfolded: whether it be Riff Raff’s (Jim Baxter) glowering, Frank’s (Garrett Zink) posturing,  or Brad (Phil Vannoorbeeck) and Janet (Bridget Linsenmeyer) cowering. Greg Bell’s use of perspective to present different angles of the same story to different parts of the audience is delightful and electrifying. Unique interpretations of some of the characters also increases the energy in an already libidinous musical. Emily Biondi’s interpretation of Columbia as an anime-style, manic pixie dream girl was particularly engaging and humorous.

The Benevolent M.C., Vaz Deferenz, opens the pre-show by explaining the show’s ground rules and when it’s appropriate to use the content of the goodie bags. Referring to the show’s encouraged audience participation, he opines the show is “like kindergarten with more profanity.” That’s the last thing the M.C. said all night that’s fit to print.

“Science Fiction,” the show’s opening number sets the stage for the rest of the show. As soon as the lights go down, members of The Phantom Corp (Rocky Horror’s version of the chorus) wearing early-punk inspired lingerie begin vigorously simulating an imaginative array of sex acts. Magenta as played by Parker Bailey Steven, sings lead on “Science Fiction” and her unmiked voice easily fills the room. Some of her fellow actors voices were muffled when they were not facing you, but this is easy to forgive. There are enough gyrating members of The Phantom Corp to distract from any missed lyrics.

The scene preceding the song “Over at the Frankenstein Place” features one of the productions few set pieces, but perhaps the most clever. Brad (Phil Vannoorbeeck) and Janet (Bridget Linsenmeyer) ride on a facsimile of a car, complete with working lights and maneuvered all about the stage by the Phantom Corp. The car is tribute to Alan Zemla’s genius. The set by Alan Zemla may be Spartan, but the Phantom Corps bedecked in Hot Topic finery and Ziggy Stardust-style face makeup provide the mood, and serve as props and set dressing.

“Time Warp” was a rollicking crowd-pleaser with fantastic dance performances by all on stage. Choreographer, Jillian Locklear Bauersfeld uses many of the stage’s unique features to enhance the performance. Spotlighters is a theater in the round, but during every number, no matter where you are seated, you have a full view of all of the action. In many numbers, depending on your seats, the action may fall right into your lap.

In “Sweet Transvestite,” Frank, the villain or perhaps tragic anti-hero, makes his first appearance. Garrett Zink’s performance as Frank is an extraordinary tribute  to Tim Curry, who originated the role. Garrett Zink’s facial expressions are the highlight of his performance. His eyebrows are capable of eliciting visceral audience reactions without so much as a word of dialogue.

The second act features a bevy of brilliant songs and performances, each topping the last. At the very, very end cast members are dragged up onstage to do the “Time Warp” again and the show closes with bang. Rocky is played by buffed Stephen Edwards, who delivers a solid rendition of “The Sword of Damocles.”

A theater Spotlighters’ size is where The Rocky Horror Show is intended to be staged. The intimate venue allows every member of the audience to feel deeply involved and for the audience to view every writhing, gyrating body with ease. In this season of thrills and chills, The Rocky Horror Show is the perfect entertainment for consenting adults looking to try something new, yet familiar.

Running Time: One hour and 40 minutes, with one 15-minute intermission.