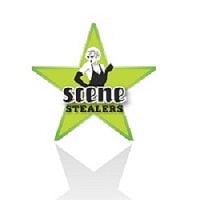 Here are our new Scene Stealers honorees. Congrats to all of you!! This week The Addams Family at Kensington Arts Theatre sets the record for most Scene Stealers from one show-5!

“Lisa Carrier Baker as Alice Beineke was unassuming at first, but her climactic performance at the end of act one with the song, “Waiting” is marvelous! Carrier Baker continues to shine through the next scene as the cast sings, “Full Disclosure 2.” In a scene that is too delicious to give away, Carrier Baker had me in the palm of her hand with her over-the-top performance-Anne Vandercook.”

Chris Gillespie as Mal Beineke, Singing “Crazier Than You” in The Addams Family at Kensington Arts Theatre

“Chris Gillespie fills the role of the no-nonsense Midwestern father of Wednesdays love interest very well. The Beinekes are “typical family” but the Addams crew helps them find their inner crazy. Gillespie’s Mal is no exception and his splendid performance in “Crazier Than You” is fantastic! Gillespie will have you laughing hysterically and absolutely steals this scene.”-Anne Vandercook.

“If I could give Bobby Libby multiple scene stealer honors this week, I most certainly would! Libby nearly stole the show as the eerie patriarch of the Addams clan. Throughout the show Libby delivered perfect comedic timing, but his rendition of “Happy Sad” was moving and sweet, the very comical Libby tones it down and pours his heart out to “his little Attila,” his daughter Wednesday. It was a touching moment and Libby sung beautifully.”-Anne Vandercook

Camryn Shegogue is awesome as the eldest child of the iconic The Addams Family-Wednesday. She is frightening and yet you feel for her as she discovers the new feelings of love that she has discovered. This is conveyed in her engaging delivery of the song “Pulled,” a truly stunning performance.-Anne Vandercook.

Chuck Dluhy as Uncle Fester, Singing “The Moon and Me” in The Addams Family at Kensington Arts Theatre

“In a show full of incredible performances Chuck Dluhy finds his own moments to shine. Dluhy is amusingly quirky and fun in his portrayal of the well-known character. His performance of, “The Moon and Me” is outstanding. A love song to the moon? Oh yes! And Dluhy does it well, with the perfect combination of pure sweetness and ridiculousness.”-Anne Vandercook.

“I was impressed by Louis Buttelli‘s energy and commitment in this crucial scene which establishes his relationship with Brutus and drives the play. He grabbed my attention from the get-go and never lost it. –Sophia Howes

“In this powerful and deadly scene, Anthony Cochrane showed a rare combination of anger and compassion when front-stabbing Caesar (Michael Sharon). I understood the motivations of Brutus for the first time. A fabulous performance.”-Sophia Howes

“Miranda Medugno as Helen Keller, performed Henry Wadsworth Longfellow’s “A Psalm of Life” with pure exuberance. She captivated the audience with her vocal and physical rendition of the poem, filling the auditorium with Keller’s desire to realize herself not only as a woman but as an intelligent, passionate being. Ms. Medugno’s performance illuminated the stage.”

“Adina Verson in her first scene with Rodalind (Zoe Waites) she showed us that Celia can be as much fun as Rosalind. Verson’s Celia is not left in the shade by Rosalind  but shines on her own.”-Sophia Howes.

“Chad Wheeler was an absolute show-stopper as Teen Angel in RMT’s Grease, an already very good show. His rendition of “Beauty School Dropout” was flawless. He moved about the stage with seemingly little effort. His angelic voice filled the auditorium – a must see performance for sure.” –Anne Vandercook.

“In Caleen Sinnette Jennings’ incisive ‘Not Enuf Lifetimes,” David Lamont Wilson plays two roles: Dante, a computer geek, and Ronnie, a hip hop poet. This double casting, which was written into the script, becomes one of the most evocative elements of the show: As Wilson conveys both Dante’s middle-class demeanor and Ronnie’s street mien, the one is unrecognizable in the other, yet both are seemingly not disparate. Wilson’s Ronnie appears first, in a scene where he delivers—in the form of a 27-line hip hop poem—his scathing critique of the young social activist Ian (played by Kiernan McGowan), whose white-privileged do-gooder presumption Ronnie resents:

Where you come from?
Hopping off your white horse, Ridin’ through the ghetto to rescue, of course.
Wanna fight the power, wanna uplift all the poor
Wow, gee, I guess nobody ever tried that before

The full speech is mindblowing—both as written and as performed—and its raw, honest anger deepens, drives, and commands the scene. The words are Jennings’ but Wilson leaves no doubt they are Ronnie’s.  Wilson’s cadences instantly establish the street cred of his character, and with it the authority and authenticity of all that is to follow. It is an astounding moment in an masterpiece of a play.”-John Stoltenberg

“This was one helluva great ensemble consisting of excellent young singers, actors, and dancers-all triple threats-dancing up a storm and having a blast giving Hope (Lindsay Martin) very little hope (of living) during the wild and crazy, finger-snappin’ West Side Story tribute “Snuff That Girl.” And Choreographer Stefan Sittig’s choreography was a pisser to perform and they all came through like dance veterans.”-Joel Markowitz

“Andy Lieberman was an Energizer Bunny all through his exhilarating performance as the rebel Bobby Strong and he was in his prime leading the talented ensemble through “Run, Freedom, Run!” And what a hoot watching him ‘conduct’ his choir! The audience exploded in applause after the wonderful harmonies filled the auditorium, as a tribute to Andy and his fellow cast members who had just blown the roof off the place.”-Joel Markowitz

Annie Ottati Singing With Much Sadness “Tell Her I Love Her’ at Urinetown The Musical  at The George Washington University.

“And what a performance by Annie Ottati! She and her Teddy Bear stole the show and every time she spoke the audience roared. Her rendition of “Tell Her I Love Her” at the end of the second act was heartbreaking and drop-dead funny – all at the same time. I have seen dozens of actresses perform this song but this is now my favorite. What a Scene Stealer this was!”-Joel Markowitz

In the Moment: “Julius Caesar’ at Folger Theatre (review) by David Siegel.

Not Enuf Lifetimes at The Welders at Atlas Performing Arts Center review by John Stoltenberg.

Urinetown the Musical review by Joel Markowitz at The George Washington University.