Nightfall with Edgar Allan Poe is an adaptation of four of Poe’s better known tales of horror: The Raven, The Fall of the House of Usher, The Pit and the Pendulum, and The Tell-Tale Heart. Playwright Eric Coble has framed these literature-in-performance adaptations around the metaphorical conceit of Poe himself locked in a sanatorium trying to convince his doctor that he is not insane.

Such a script is perfect for the Molotov Theatre Group, which specializes in the preservation of the Grand Guignol French Theater of Horror. Not only is Poe and his aesthetics more beloved in France than they are in his native America, but Poe’s Halloween of horror is more beloved in America than anywhere else in the world. Hence, Molotov’s production draws on the best of both worlds. 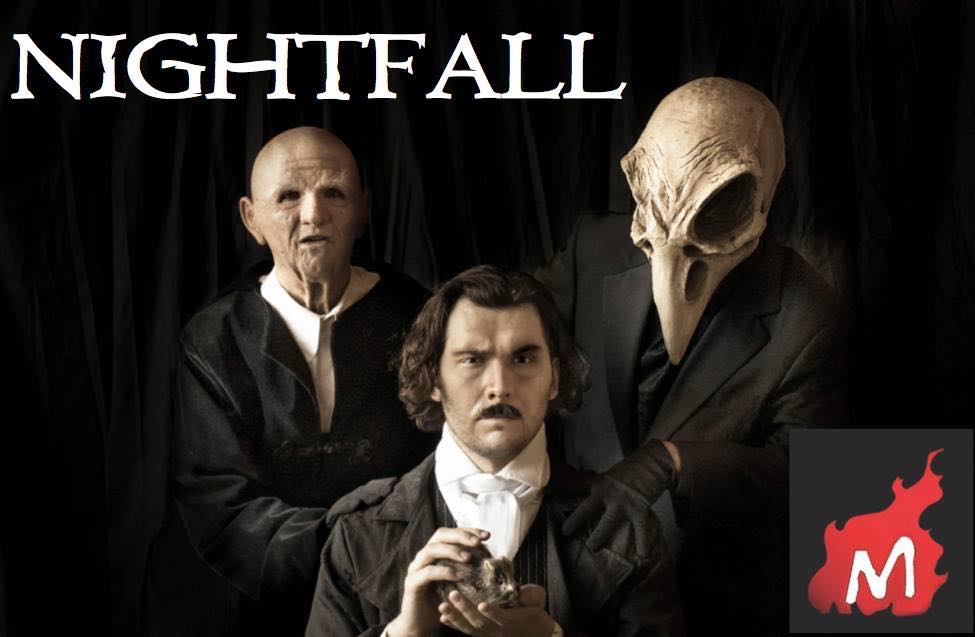 Their production of Nightfall starts with a Raven that’s a little jittery on its feet, but soon finds its terror-face as Usher descends into madness and Edgar flees into the night. Then, after the two men in the bottomless pit escape the pendulum swinging mercilessly above their heads, the old man and his evil eye beats our hearts to a frenzy.

For a fun, terror-stricken evening in the theatre, Molotov’s Nightfall will certainly leave you scurrying for a nightcap.

Elliott Kashner plays the renowned author with his even more legendary bouts of depression, alcoholism, and flirtations with madness. To be sure, the stylized Grand Guignol approach to theatre helps the somewhat tongue-in-cheek tone of the evening. You’ll find no theatre of illusion or realism here. Even so, as Kashner’s Poe hangs over the pit, certain that he is about to fall eternally to his doom, you’ll believe his racing pulse.

A supporting ensemble of five play a variety of characters and lend the evening that rough-theatre approach that can be so effective in DCAC’s small intimate space.

Matthew Marcus tackles the bewildered Edgar in Usher. He gives the character a wonderfully appropriate confusion, and when it comes time “to get the hell out of there,” we couldn’t understand more his flight.

Stacy Whittle plays Madeline Usher, more an apparition than a character. When she comes on stage as the rat-lady, however, and proceeds to terrorize the two men with strangely seductive Freudian rat-hands, she steals the show.

Yoni Gray gives life to Sante of The Pit and the Pendulum, Poe’s fellow condemned prisoner. His Sante’s squiggling body really captured the essence of being tied-to-a-wall while rats crawl over it with their little feet on tip-toe.

Finally, we have Jen Bevan as the lost Lenore, “the rare and radiant maiden whom the angels named Lenore.” She captures that character’s silent, haunting beauty, but it is really her portrayal of the old man that took by heart away. Staring at the seemingly petite Bevan in full latex head mask looking so much like a miniature grumpy old man, I thought I was looking at that evil evil eye.

Mark Kamie directs Nightfall, and aside from a little too sing-songy Raven at the play’s beginning, does a great job keeping the action moving and the horror acute. He adds enough stylistic flourishes to keep the play visually entertaining.

The rest of the design team also does a fine job. Brian McDermott has a delightfully flexible set that allows for rapid scene changes.  Jen Bevan’s costumes are so 19th century. And Pete Vargo’s lights keep the action spooky yet the actor’s lit while Gregory (Thomas Woolford Martin) adds good sound and music.

And whoever made the Raven’s head did a fantastic job.

Nightfall with Edgar Allan Poe might have a cliqued premise: Am I mad? Do you really think so? And the production definitely doesn’t shine any light on an answer about insanity or the aesthetics of the supernatural, but for an entertaining, stylized scary evening with one of America’s great writers, Nightfall delivers.

Running Time: 80 minutes, without an intermission.

Nightfall with Edgar Allan Poe plays Thursday through Sunday until December 7, 2014 (with no performances Thanksgiving week), at the DC Arts Center – 2438 18th Street, NW, in Adams Morgan, in Washington, DC. Tickets can be purchased online.

Molotov’s “Nightfall” Picks Up Where “Normal” Left Off – And Then Some by Alex Zavistovich.

‘Playing Poe: The Man, the Mustache’ By Elliott Kashner.

‘Playing Poe: The Man, the Mustache’ By Elliott Kashner‘Nightfall: Inside the Minds of Madmen – And Molotov’ By Mark Kamie.