It’s that time of the year where the Halloween spirit becomes a major player in what the subject matter of theatrical events around town hang their hat on. What a fitting selection for Greenspring Players to provide to the DC metro community when presenting the superbly crafted murder mystery Dial ‘M’ for Murder.

Alfred Hitchcock fans may not know that the 1954 movie came two years after the London play by British playwright Frederick Knott had its original run. Mr. Knott was involved in both the stage play and the film versions. 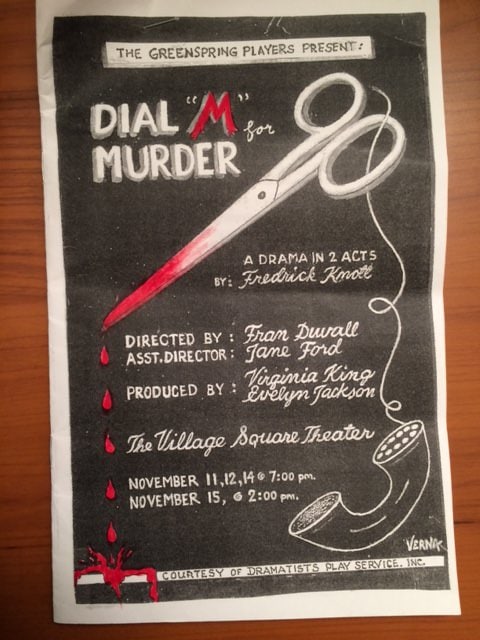 When you enter the theater and are handed your program, you immediately know there is something frighteningly unique about this production. The program is done entirely in black and white and was sent to the printers for reproduction. Yet, each and every clever program contains individually colored drops of RED BLOOD on the cover – representing whoever the evening’s victim will be. It doesn’t take long for the audience to find out who will be leaving this world; the play spends about 80% of the drama tracing every possible piece of evidence in its attempt to identify the killer. There are so many twists and turns in this “Whodunnit’ that it may surpass the best roller coaster ride at Kings Dominion.

The setting for this two-act play is Margot Wendice’s flat in London.  Attention to detail was displayed by Set Designer Verna Finly, who also designed the program cover previously mentioned. The stage of Village Square Theater is quite large and it was filled with what you might find in a typical 1950’s living room: a working fireplace, one couch, a pole lamp, potted plants, numerous chairs, pictures hanging from the walls, a telephone table, curtains around the porch picture window and three doors – one coming into the living room from outside the house, one used to enter the bedroom, and a patio door at stage left.

Another example of detail-mindedness was certainly on the mind of Prop Master Maxie Jo Nelson, who incorporated a loudly clicking rotary dial-up telephone. The phone is utilized throughout the evening’s performance and has an important role in killer identification. Kudos also to Ms. Nelson for her ornate liquor cabinet display. Wardrobe Consultants Ray Magliozzi and Michilene Shipley provided a super selection of era-appropriate costumes, especially the mink stole used by Margot on her night out on the town in Act I. All of these production elements convincingly placed the action in a timeframe returning to those thrilling days of yesteryear.

Margot Wendice and her husband Tony are creatively portrayed by Janet Rife and Robert Goolrick (The role of Margot is also played by Sally Simko in alternating performances). Adron Krekeler plays Margot’s boyfriend who does an impressive job of playing the wife’s suitor, and is the author of the love letter which becomes a critical piece of evidence in convicting the killer.

Ruth Tomasko performs the role of Chief Inspector Hubbard and assigned to be the ‘Lieutenant Columbo’ of the evening. Each of these four principal cast members (there were a total of 8 actors in the cast) contribute in helping to confuse both the audience and the chief inspector by simultaneously pointing “you’re guilty” fingers at each other. The audience is a witness to the whole bloody affair, yet how the chief inspector completes the equation is the key to the play’s success. To separate fact from fiction, the scene announcer, Ernie Sult, provides voice narrative throughout the evening to assist the patron in their endeavor to be their own best detective.

Both directors Fran Duvall and Jane Ford do a yeomen’s job in carrying out the task of putting all the pieces of the evening’s jigsaw puzzle together.

Perhaps you might enjoy the opportunity to help the chief inspector put away one of the cast members for life? 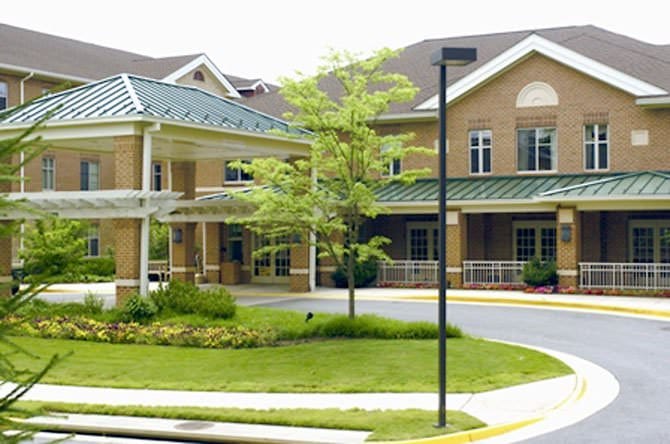