Had you asked me moments before The Rez Sisters, American University’s tremendous and thought provoking new play, began, I would have told you I didn’t think bingo was all that interesting. Well, that was about to change. 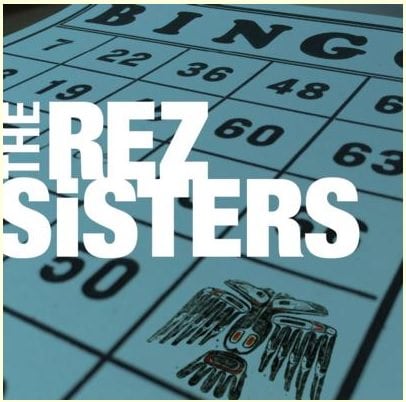 It isn’t just about the real live bingo card you get when you walk in the door, with the prospect of an actual game (and an actual prize) dangling tantalizingly in front of you. It’s the outsized enthusiasm that the characters themselves – a group of Native Canadian woman living out their lives in an isolated and impoverished reservation in Ontario – have for the “Biggest Bingo in the World”, a Toronto-based extravaganza that is the main focus of this incredible play.

There is certainly an element of Chekhovian yearning in Tomson Highway’s work. But there is also a deep vein of mystery that runs through this play, a magical symbolism that transcends the dreary poverty of everyday life on “the rez”. Sometimes tragic, sometimes haunting, and often hilarious, Director Cara Gabriel navigates the complex and sometimes contradictory impulses of the show with ease. Consistently brimming with energy, and utilizing a smart and attractive set design by Kelly Bristow, The Rez Sisters brings together the very big forces of inequality and cultural domination with the minutiae of everyday relationships. In short, it’s one hell of a game of bingo.

Together with Gabriel’s kaleidoscopic staging, it is the strength of the actors that carry the show forward. Clancey Yovanovich is hilarious as Philomena Moosetail, who’s chief ambition in life is to purchase a magnificent “spirit white” toilet. Bianca Lipford plays Emily Dictionary, a former biker chick with a quick mouth and humor as black as the leather jacket she sports. Rosemary Cipriano plays the gentle, cancer-stricken Marie-Adele Starblanket, who worries what will happen to her 14 children once she is gone. Meanwhile, Manna Middlebrook plays the bossy Veronique St. Pierre, who covets Marie-Adele’s children because she has none of her own. Less doting is the country rock obsessed Annie Cook, played with engaging vigor by Stephanie Wilson. Holding them all together is the overalls clad Pelajia Patchnose, played with great poise and precision by Emily Whitworth. Wielding a hammer and with an oft-repeated sense of ambition to move to Toronto, become the first woman Chief, or at least get the dirt roads paved over, Whitworth’s Pelajia wants desperately to leave the rez, but knows deep down she will not.

As the ladies swap stories about the men who have loved them, beat them, or drank themselves to death, they are watched over by the non speaking Nanabush, played by the only male cast member, Grant Saunders. Nanabush is an ancient, birdlike spirit who seems able only to communicate with Zhaboonigan Peterson, a simple, sweet girl with a traumatic past. Megan Konyndyk plays Zhaboonigan with a straightforward gentleness, not as someone who lacks normal intelligence, but as someone who can see beyond, to the spirit world. Likewise, Grant Saunders is able to express a remarkable range of feeling, using only his physicality (although he does also have a hilarious speaking stint as the Bingo MC).

The presence of Nanabush seems to sharpen the point of the basic tragedy underlying The Rez Sisters. From a heritage of beauty, grace, and even magic, the residents of the (fictional) Wasaychigan Hill Indian Reserve are more concerned with toilets and bingo than their prodigious cultural legacy. But it would be wrong to reduce this show to a comment on the painful legacy of European expansion. Within the reservation itself, despite its pettiness and parochial absurdity, there are also tremendous, vibrant human beings who are doing the best they can. And even under the worst of circumstances, there’s always a chance that you might just win the next bingo.

Running Time: About two hours, with one fifteen minute intermission.

The Rez Sisters plays through tomorrow, November 15th at 2 PM, at the Studio Theatre at American University’s Katzen Arts Center. Tickets can be purchased by going online.