The Indian Creek Upper School production of The Laramie Project by Moisés Kaufman and Members of the Tectonic Theater Project on Saturday evening at the Jack and Nancy Becker Center for the Performing Arts is a riveting and powerful chronicle of the October 1998 kidnapping and brutal murder of 21 year-old University of Wyoming gay student Matthew Shepard, and the ensuing interviews by Kaufman and members of the Theater Company conducted with Laramie residents over 14 months. Combining their own journal entries with published reports, The Laramie Project is a docudrama that attempts to reenact the horrific events of that night, while also exploring a community’s views on homosexuality, religion, sex, and nontraditional relationships.

The Laramie Project premiered at The Ricketson Theatre by the Denver Center Theatre Company in February 2000, at the Union Square Theater in New York City, and a November 2002 performance in Laramie, Wyoming. The Theater Company collaborated with HBO to make a film based on the play, which opened at the 2002 Sundance Film Festival, and was nominated for four Emmys.

Directed by Matt McCormick and Jill Woodward, you will have to pay close attention to this moving production as it is atypical of most plays, in that there are nine actors taking on 60-plus roles in a series of short scenes over three acts, all of which encompass “Moments” to transition each character as they tell their story.

Before the play opens to a stark stage, there is a “buck fence” as the only prop. McCormick and Woodward effectively set the scene for the story as we witness the very vivid reminder of Shepard’s ordeal: a bouquet of flowers, left as a remembrance, and affixed to the middle of the fence. Very quickly, Props Designer Erin McNamara (’17) and the Laramie cast placed simple chairs and tables, as well as clothing racks that served as wardrobe changes as they added to their grey Tectonic Theater tee shirts and blue jeans throughout the evening. Student Production Manager Jordan Hornick (’15) and Stage Manager Jocelyn Auld (’18) kept the rhythm of the evening in check as Lighting Design and Light Board Operator Nicholas Paddy (’16) and crew Hannah Powell (’16) and Jeremiah Pace (’17), assisted on spotlight by Ben Callanan (’15), Sam Reinhart (’15), magically transitioned the projection screen to serve as the background.

The Narrator (Noconi Tahsuda (’16) introduced “Moments,” which were reflections of the Company as they reacted to the emotions of the residents, and of the residents themselves as they recalled heart wrenching revelations. Tahsuda was spot-on in describing the life and mood of Laramie–its culture and its residents—and what Laramie was like before Shepard’s murder.

As the Narrator introduces the cast: Mohamad Bizri (’15) (John McAdams); Madison Jennings (’15) (Barbara Pitts-McAdams); Hannah Elliott (’15) (Mercedes Herrero); Cameron Johnson (‘16) (Greg Pierotti) and John Tahsuda (‘16) (Stephen Belber), the audience immediately understands how each actor seamlessly shifts through the multiple personas they are playing. The narration format works very because the actors draw the audience into the heart of the story in a poignant and telling manner, while also coaxing us to reflect on the story as it unfolds.

The “Moments” set the tone for the play in the first act when two characters from the University of Wyoming—the first a theater student–laments that Laramie was once a great place to live, but seems unsure now. The playwright, Kaufman, interviewed a theater professor about how students were different, unlike students in other states where she had taught, and were not afraid to speak their minds. As we returned to the young theater student, he expressed excitement to attend the University on scholarship for portraying the part of a homosexual in the play Angels in America, despite his parent’s objections. As he struggled with his own religions upbringing and what he now feels, his statements began to show the chasm in the community about their open-mindedness of homosexuality or lack of acceptance. It is with that revelation  that the tone automatically shifted following Shepard’s murder, and the town of Laramie becomes changed…a town defined by a crime.

As the narrator returned us to the interview format, we were introduced to the other members of the community as they linked the town’s once-greatness to the railroads; the general philosophy of the residents to “live and let live,” as well as their discussions of class distinction—educated versus non-educated. As Company member Andy Paris strives to learn more about the town, he meets a colorful, tell-it-like-it is limousine driver who befriended Shepard and shared his recollections of the shy young man. The driver believes a gay population exists in Laramie, but he preferred to concur with town folks’ consensus of “live and let live.” Ironically, in the cultural discussion of “live and let live,” the audience was introduced to a variety of ministers and a priest who either spun in the direction of acceptance or rejection of homosexuality, as well as the young Muslim woman who faced her own trials over being challenged about wearing a scarf in deference to her religion.

We get to the heart of the story as the audience witnessed the interviews of two community members recalling the final night that Matthew Shepard was last seen alive—the owner and the bartender at the Fireside Bar–we are gripped by their haunting tale of how Shepard became acquainted with the two men who would later be responsible for his fate. As members of the community later described the characters of the two men involved, the scene quickly shifts to the University student who describes his discovery of Shepard tied to a fence in the remote outskirts of Laramie, and the first responders who worked valiantly to save him. 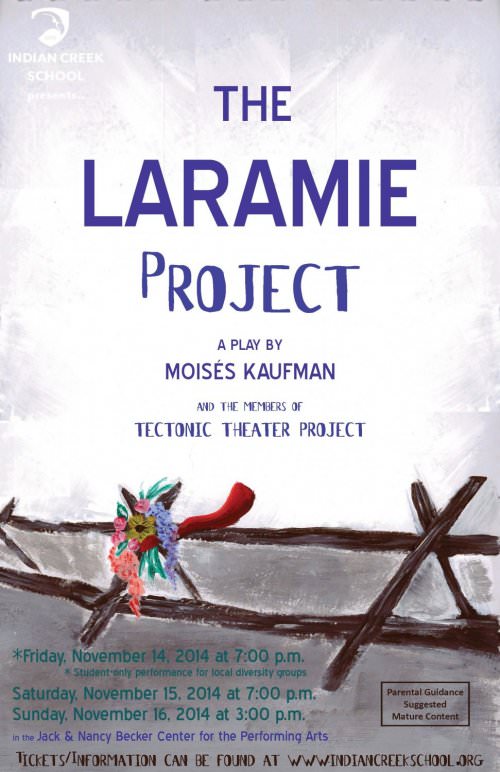 n Act 2, the residents are bombarded by the media in a highly-charged outpouring of anger, grief, and disbelief that something like this could happen in their town. As the characters talk, pace and gesture, so fraught with the unfathomable events that enveloped their community, they could barely conceive of the horror themselves. Interspersed in the story are the frequent medical updates of Shepard’s condition, as well the gripping story of Shepard’s assailants. Residents begin to question their own beliefs, vigils are held by a Catholic priest despite the apparent lack of participation from fellow clergy, and the residents band together in a parade in support of Shepard.

In Act 3, the enormity of Shepard’s death reaches all corners of the world. We witness hate from a religious group, but also come to feel the enormity of love and support from those who knew Matthew Shepard best: his family and his friends. With the music channeling the enormity of this emotionally charged production, Shepard’s friends band together as angels to drown out the hate, singing “Amazing Grace” with haunting clarity.

The brilliance of Sound Design crew Matt Oberteuffer (’16), Hannah Powell (’16), and Jeremiah Pace (’17) is effective as the lyrics to the song quietly fade into the background. Amidst all the grinding emotion, he voice of reason comes from Matthew’s father, Dennis Shepard, who encouraged healing over hate.

The Laramie Project sends a very strong message as the play concludes. In the face of hatred there emerges a stronger desire for love; if there is complacency, we replace it by advocating for change; when we challenge ignorance we embrace acceptance; and when we face hatred, we choose peace. The actors took a highly emotional and volatile subject, made it their own through their voices and emotions and, I believe, no one walked away from this experience without feeling changed. As the cast members closed the show, they reminded us of one crucial word: “H – O –P –E.” We can rise from the vestiges of the inconceivable to the possibilities that drives humankind:” L – O – V – E.”

The Laramie Project plays for a final performance on Sunday, November 16, 2014 at 3 p.m. at The Jack and Nancy Becker Center for the Performing Arts at Indian Creek Upper School – 1130 Anne Chambers Way, in Crownsville, MD.  For tickets, call (410) 849-5151, or purchase them online.