Bright shiny objects in unexpected places often draw our attention. This weekend’s bauble, The 25th Annual Putnam County Spelling Bee, drew the spotlight to Magruder High School.  The evening was enhanced by the production’s playful tone, great singing and wonderful comic timing. Under the direction of Marla Harper, technical direction of Terri LaFond and musical direction and choreography by Ricky Stakem, the young cast and crew were given a strong base of support. 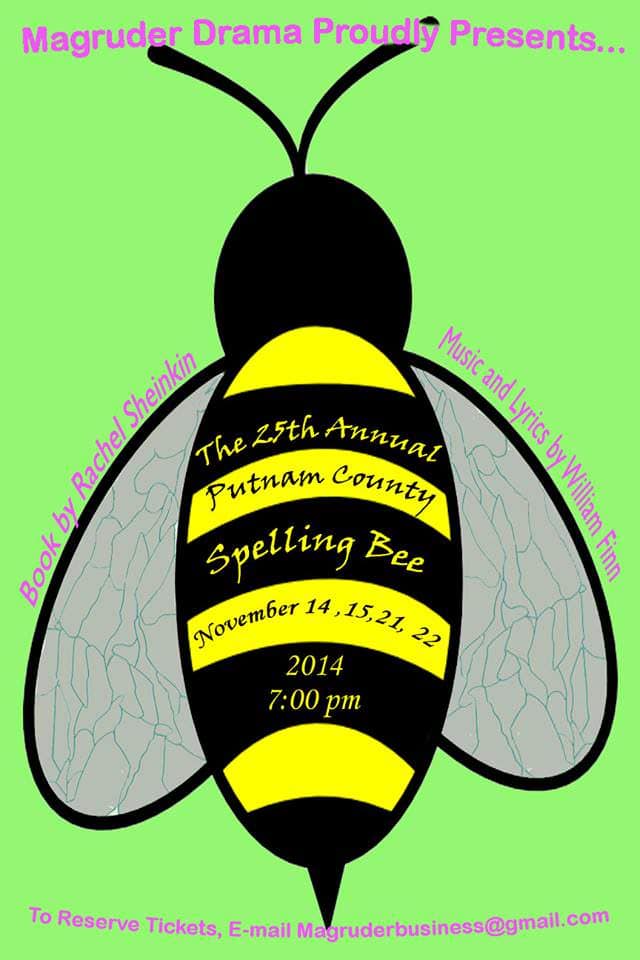 I was particularly delighted by a scene where time sped by and each speller only had enough time to say a bit of gibberish into the mic. Abruptly, the frantic scene became one where everything, both vocal and physical, slowed down to about one third of its normal speed.

Each of the six main spellers drew characters that were at once believable and, at times farcical. Ben Fleischer, as Leaf Coneybear (speller #11), was a fanciful space cadet who happened into the roll of accidental speller. Beaming in from la-la land, his clothing, demeanor and surprise at getting any word correct added a note of levity. His last number, “I’m Not That Smart,” seemed to sum it all up.

Not to be outdone was Cameron LaFond, as William Barfee (speller #16), with his magic foot used for tapping out the spelling of words as he worked his way to the top of the competition. Much to his surprise, he was able to continue with aplomb after the stage became sticky with a purposeful soft-drink spill so that he could no longer use his magic foot.

Marc Pavan, as Chip Tolentino (speller #47), brought his mighty voice and stage presence straight from Act Two @ Levine to the Magruder stage. His swan song: “Chip’s Lament,” as the candy concession man who laments his ‘unfair’ elimination from the bee, was one of the strongest of the night.

The women spellers were equally impressive.

Julie O’Hara, as Logainne SchwartzandGrubenierre (speller #18), was constantly tormented by her life with two dad’s whose only mutual interest , seemed to be the success of their daughter. Complete with frizzy ponytails and a lisp, she appeared to be a beaten down soul perfectly expressed both in dialogue and “Woe is Me,” a trio with Carl and Dan.

Elizabeth Doerrman also showed her formal training in musical theater as a shy, downtrodden speller, Olive Ostrovsky (speller #24), who was close-to-abandoned by her mother, staying at an ashram in India, and by her perpetually late and fairly clueless dad, played by Fletcher Olson. Doerrman hewed to her character both in spoken and singing parts. Special mention should be made of Glenna Anderson’s voice as Mrs. Ostrovky as she joined Mr. Ostrovsky and Olive in “The I Love You Song,” a haunting lament over a wish for closeness. Instead of that closeness, Olive expressed love for her real companion in “My Friend the Dictionary.”

Not to be forgotten is Kate Hedges as Rona Lisa Perreti, the winner of the 3rd Annual Putnam County Spelling Bee, now turned generally schoolmarmish and rule driven as the moderator. She participated in numerous musical numbers through which she made her presence felt more by demeanor than overpowering vocals.

One of the most humorous characters had no singing role. Eli Elstein, as Vice Principle Douglass Panch, added bursts of humor through is circular definitions of words and totally useless sentences that provided no context for the spellers.

Evan Kellner, as Mitch Mahoney, served as a grief counselor, distributing juice containers and a half-hearted pat on the back to each contestant as they were eliminated. The best aspect of his performance was the swagger with which he first entered the bee.

Costume Designers Hanna Lee and Eve Guttman did a marvelous job in drawing out the essence of each character. Olive, Marcy, William Barfee and Leaf could have carried half of their roles simply by their costume and demeanor. Costume, hair and makeup made Hedges, as Rona, all that she could be.

As with many high school dramas and musicals, the behind-the-stage players far outnumbered the actors. Each team must have done their job with lighting, sound, costumes, carpentry and props as there was not a mistake to be seen. I particularly like the use of colorful individual rectangles of varying nights as seats for the spellers.

Even a moment on stage is enough to thrill a budding thespian. Many of the behind-the-scene workers had their moment during times when an entire company was used. Most of the time, the company members were given singing and dancing routines identical to the leads. Sometimes they were not up to the challenge. My one change to the production would be to simplify these parts to equal the skill levels of the background company members.

The 25th Annual Putnam County Spelling Bee, written by Rachel Sheinkin with music and lyrics by William Finn, has been released in a student version and has become quite popular among high school performing groups.

Running Time: One hour and 45 minutes, with one 15-minute intermission.

The 25th Annual Putnam County Spelling Bee continues its run on November 21 and 22, 2014 at Magruder High School – 5939 Muncaster Mill Road, in Rockville, MD. For tickets, purchase them at the door or online.