Compass Rose Theater puts on an abbreviated version of Andrew Lloyd Webber’s Cats. With a cast that sings and dances their way through the top numbers, this is a likable production that is both fascinating and entertaining.

Directed by Lucinda Merry-Browne, choreographed by  Emily Frank and music directed by Anita O’Connor, with set design by Joe Powell, Sr. and Joe Powell, lighting design by Joey Guthmann, and costume design by Renee Vergauwen, Cats, based on Old Possum’s Book of Practical Cats by T. S. Eliot, tells the story about a tribe of cats called the Jellicles. On this night they make their “Jellicle choice” – a cat will ascend to the Heaviside Layer and come back to a new life. An alley-like ambiance under a full moon, the set is a series of platforms with gold cat scratches that makes for a fun-filled feline playground. The varying levels allow the performers to move about the stage, demonstrating their cat-like agility.

The opening number, “Jellicle Songs for Jellicle Cats” shows the casts ability to dance in a small space as they prance about the stage revealing true cat qualities. A lovely jazz number, choreographed by Emily Frank, it sets the tone that this is just a playful production for all. “The Naming of Cats” is a lyrical number that offers a rhythmic beat that sticks after the song is over with the cats moving about in a slick way. 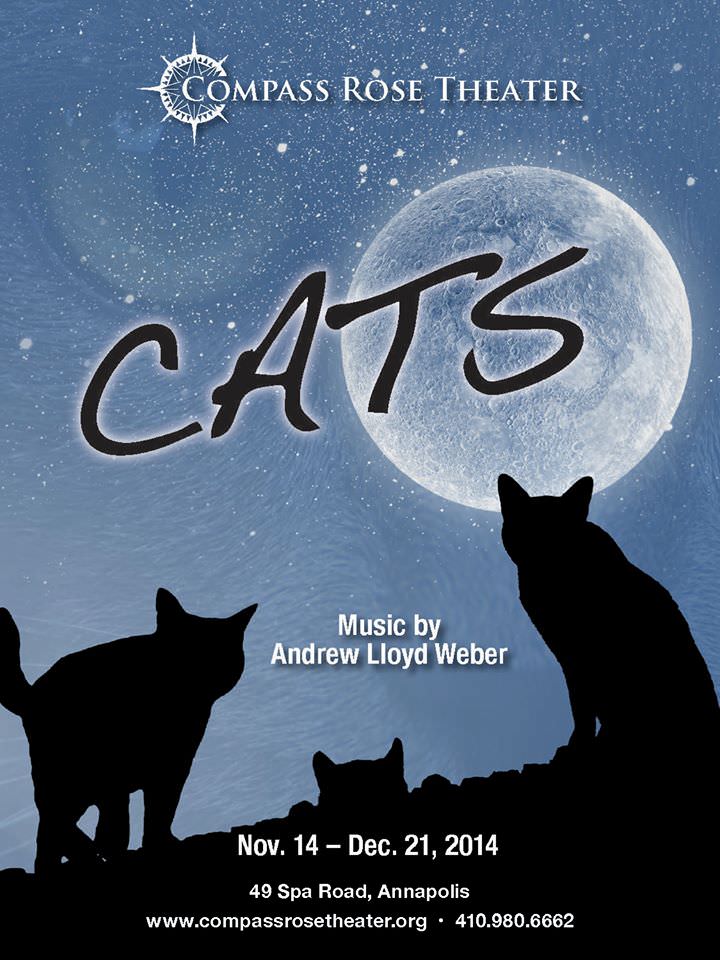 Victoria (Megan Schwartz) is a pure white kitten that has been blessed with the gift of dance. Her solo is a beautiful ballet number that is curvilinear in movement as well as posed. Schwartz shares the stage with Munkstrap (Ishma’el Edwards) in a duet that expresses the communal relationship between two cats. Schwartz also doubles as Rumpleteazer and Edwards doubles as Mungojerrie. These two notorious cat-burglars are lithe as they tumble about the stage and perform on swinging ropes.

“The Rum Tum Tugger” is a great tap number showing the slinkiness of a cat’s mannerisms. Terrence Bennett as Rum Tum Tugger is fantastic in this number and a bit on seductive side with his flashy behavior. This is a retro-jazzy number reminiscent of the Broadway show, Rent. He doubles as “Skimbleshanka: The Railway Cat,” in Act II. This is a toe-tapping number along with the lighting design that turns the moon into train wheels.

“The Cat About Town” is known as fat-cat Bustopher Jones (Anne Schroeder) is a twenty-five pounder that dresses in a snappy tuxedo and spats. As the lyrics go, he is “respected by all, as the upper class St. James’s Street Cat.” Schroeder as Jenny Any Dots, the “Old Gumbie Cat” song can be compared to the melody of songs of the 1940s and the beat of the Charleston (dance )but ironically she sits all day and rules over the mice and cockroaches at night.

“Old Deuteronomy” (Michael J. Begley) is an old shaggy cat that at first it is difficult getting past his mop-like costume but once Begley sings, his magnificent operatic voice fills the little black box that makes everything else seem insignificant. Still, he might want to reconsider what he wears under his costume.

Grizabella the Glamour Cat (Alison Rose Munn) has no sparkle after leaving the tribe in her younger years. A recluse in cat society, Grizabella sings of smiling at her old days in the popular song, “Memory.” Munn is amazing, hitting all the right notes. As “Gus – The Theater Cat,” it is easy to imagine him at the theater door, as he and Jellyorum (Jessica McKay) sing of his career heydays. Stricken with palsy, it’s sad watching him shake. McKay is sweet as Jellyorum, who along with Jenny Any Dots, watches out for the kittens. McKay as Mr. Mistoffelees, a young tom with magical powers that he can’t fully control, manages wonderful choreography along with imaginative magic tricks.

Cassandra (Mallory J. Holson) is an Egyptian sphinx and a dance number that is great homage to the cat, considering the cat’s origins and how they were revered in that era. The ensemble performs some very distinctive dance moves with a hint of Bollywood quality. Rounding out the cast is Demeter (Cassie Bednall) is a skittish cat that is a fan of “Macavity – The Mystery Cat.” This number is sultry with a burlesque quality.

This is a unique production with the actors playing dual roles. The stand-out is Renee Vergauwen’s costuming that sets one cat apart from the other. White, black, brown, or gray, the dances are costumed in shiny spandex leotards that are accentuated with stripes, fur, ears designed out of their hair/wigs, and of course stunning make-up to complete their cat features. The cast’s ability to dance and move about on the stage in this space is exceptional. So special kudos to Choreographer Emily Frank and Music Director Anita O’Connor for their magical contributions.

Running Time: One hour and 45 minutes, with a 15-minute intermission.

CATS plays through December 21, 2014 at Compass Rose Theater – 49 Spa Road, in Annapolis, MD. For tickets, purchase them online. Tickets can be purchased online.