A year old, Charm City Players has to be commended for their ambitiousness with the wonderful shows they have produced this past year. From the screen to the stage, Charm City Players’ latest production is the always enchanting The Wizard of Oz by L. Frank Baum. The music and lyrics are from the MGM motion picture score are by Harold Arlen and E.Y. Harburg with book adaptation by John Kane. Charm City Players’ production, directed by Stephen Napp, truly focuses on their message of family. The cast includes 3 sets of twins, a father and his daughters, husband, wife and their kids, and an entire family plus their cousins.

Brielle Herlein (Dorothy Gale) is just as sweet as ever both personally and professionally. Wearing the traditional blue gingham jumper dress, white blouse and eventually the ruby slippers, Herlein delivers her lines with great urgency and passion like Judy Garland did in the film. She performs with lots of confidence and shows great chemistry with the veteran actors she shares the stage with – the Scarecrow, the Tin Man, and the Cowardly Lion. Additionally, Herlein should be nicknamed the “dog whisperer” because for a vast majority of the show, she holds Toto (Louie) in her arms. In turn, Toto is quite protective of her and even barks at just the right moments. As for Herlein’s singing voice, it is beautiful as ever as she performs, “Somewhere Over the Rainbow,” and duets with the Scarecrow, “If I Only Had a Brain.” For such a little girl, she takes on big roles and has a natural talent. No doubt, if she continues to pursue an acting career, her talents will be awarded.

Nolly Murray brings out the strength in Auntie Em. She handles the farm hands with a stern voice and while she is frustrated with Dorothy’s antics she loves her nonetheless. Auntie Em’s dress is neutral beige along with her practical shoes, and her hair tied back in a bun. David Norman North is the smart-mouth Uncle Henry wearing trousers, a long sleeve shirt, work boots and a hat. He plays on other people’s words, especially Miss Gultch, intentionally causing confusion which adds a layer of humor. He is quick witted and strikes a balance with Auntie Em seriousness.

Amanda Lee Magoffin is just nasty as can be in her dual roles as Miss Gultch and Wicked Witch of the West. Magoffin plays Miss Gultch as a narrow-minded woman who completely lacks any sentimental feelings and her costume reflect that. Her dull colored dress is quite form fitting to her tiny physique. Her simple shoes and hat shows Miss Gultch’s practical side. As the Wicked Witch her character is a controlling fiend, green with envy, who wants to destroy all that is good – especially Dorothy and her little dog, Toto. Perhaps that is why her skin is green and her witches costume is black – representing her emptiness. But in the end, the purist of hearts always wins out against greed and vindictiveness.

Jason Eisner as Hunk and the Scarecrow is quite agile in both roles. His moves are reminiscent of Donald O’Connor (Singing in the Rain). Additionally, Eisner and Herlein share a mutual admiration in the respective roles and it shows by a look, an escort, or Dorothy stuffing hay back into her friend. His Scarecrow costume is comprised of a dark blue top, brown trousers, and accentuated with hay and a hat.

Michael Zellhofer starts out as farm hand Zeke but the sweet surprise is when Zellhofer sings, “If I Only Had the Nerve,” in his role as the Cowardly Lion. As much of a scaredy-cat as the Lion is, Zellhofer makes this character quite lovable and cuddly in his reddish-brown fur-like lion costume. He may think he is a coward but when it gets down to it, he stands up for what it right.

Adding to the family tree is Scott Herlein (Brielle’s father) as Hickory and the Tin Man. In both roles, Herlein exudes kindness toward Dorothy, which even though he does not have a heart, that does not make him heartless. To top it off, Herlein’s silver-painted tin body piece is physically limiting, yet he manages some fancy dance steps in “If I Only Had a Heart” and “The Jitterbug,” with the rest of the ensemble cast.

His gruff voice and brawn suits all of the characters that Randy Weber plays. As Professor Marvel he is clever yet encouraging to Dorothy, insisting she must return home. He bumbles around as the Gatekeeper and that works too since he is incognito as the great Oz. He tries to be tough as the Wizard, but in the end he goes full circle with his compassion for the Scarecrow wanting a brain, the Tin Man needing a heart, and the Cowardly Lion asking for courage.

Christina Napp was born to play Glinda. Not only her speaking voice but her singing voice transcends the stage, envelopes the audience, and brings home the message, “That there is no place like home.” Her twinkling eyes, dazzling smile, and gentle character exude a lovely nurturing quality, knowing that the munchkins, Dorothy, and Toto will be taken care of. Adding to all that shimmer is her pink gown made of satin and layered with glittered deco mesh. The bodice of Glinda’s dress, along with her crown is beaded with pearls and shiny jewels.

Annmarie Pallanck is so good as the Munchkin Mayor, that it was a pleasant surprise to discover this role is being played by a girl. Adding to the Munchkin politicos is Hope Standish-Pallanck (the Munchkin Barrister (judge), Jerrod Pinkett (Winkie General), and Grace Volpe (the Munchkin Coroner), who determines the Wicked Witch of the East is indeed dead.

The Munchkins, as young as 4 years-old, are just so adorable dressed in brightly colored costumes (orange, red, yellow, & dark green) that adds to the sparkling Munchkin land. Munchkins are played by: 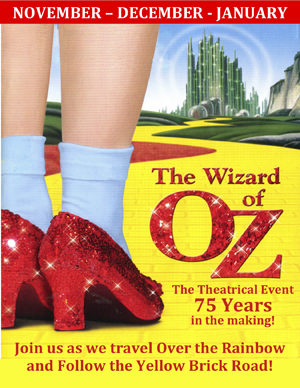 Twenty-five members of the cast contributed to the making and designing of the costumes. Kathryn Weaver is the Musical Director, Nathan Scavilla is the Musical Supervisor, and Jason Kimmel provides the Choreography. Musical favorites include, “We’re Off to See the Wizard,” “Lions and Tigers and Bears,” and “Ding Dong! The Witch is Dead.”

Credit and admiration goes to Stephen Napp for managing the technical aspects (lighting and sound) the stage crew, as well as designing and constructing the set. The best word to describe the set is sparkly. The set glistens in the stage lighting that is comprised of an entry to the Gale’s farm house, a series of stairs, platforms and stone (painted) walls that later double for Munchkin land, the corn field, the forest, the poppy field, the witches castle, and Oz. Mostly painted in emerald green and accentuated with green glitter, it all works dreamily on a shoe-string budget. What is really clever is the tornado scene done as a dance number in day-glow and much of the ensemble cast doubles as trees and flowers, bringing the set to life.

Running Time: Two and a half hours, including a 15-minute intermission.

The Wizard of Oz plays through January 11, 2015 at Charm City Players performing at the Hannah More Arts Center at Saint Timothy’s School – 8400 Greenspring Avenue, in Stevenson, MD. For tickets, call (410) 472-4737, or purchase them online, or at the door.