Donny & Marie: Christmas at the National provides our nation’s capital with a sparkling and joyous holiday celebration. Superstar siblings Donny and Marie Osmond are every bit as charming and delightful today as they were when they were doing their 1970s’ television variety show. In addition, during the years since then, each of them has gained a personal and professional maturity which allows them to give the audience a richer, more nuanced performance.

Versatility is the watchword in this glitzy and glamorous Las Vegas-style show. From ballads to rock and roll to country to hip hop to show tunes to rhythm and blues to songs of the season, from familiar favorites to new material, from solos to duets to production numbers, Donny and Marie demonstrate tremendous talent. The show opens with thunderous applause as Donny and Marie are announced and the audience cheers as the duo sings “We Need a Little Christmas” and “All I Want for Christmas is You.” In the tradition of Vegas-style patter, Donny mentions his big win on the television show Dancing With the Stars and points out that Marie only got to the finals—a subject he returns to often during the show.

Another recurring theme throughout the show is the stars flirting with the audience. At one point, Marie goes up the aisle autographing the heads of balding men with her lipstick—and the audience loves it. One woman shouts that when she was fifteen (she appears to be quite a bit older than that now) she met Donny and wanted to marry him and he gives her a G-rated hug. (The male half of this review team admits that he was a little thrilled when Marie touched his hand.)

The clever set design by Perry “Butch” Allen and Peter Morse combines a brightly-lit Christmas tree and piles of wrapped presents with a large video screen upstage. The screen allows Donny and Marie to take the audience on a nostalgic journey through their lives which focuses as much on family as it does on show business. When they sing “It’s a Beautiful Life,” the photos on the screen start with Donny and Marie as toddlers and the audience watches them grow up. In a particularly touching moment, Donny pays homage to his late parents by singing “Whenever You’re in Trouble” as photos of his parents appear on the screen.

The pair brings Christmas to Motown with “Little Drummer Boy” and other seasonal favorites performed with a throbbing bass and a pounding beat. Donny melts the hearts of his fans with “Puppy Love” and predicts he’ll be singing that song when he is 95. He also sings “One Bad Apple” and says it was #1 in 1847! Meanwhile, Marie pays tribute to our men and women in the armed services with “Boogie Woogie Bugle Boy of Company B” and delights the audience with her legendary hit “Paper Roses.”

The first-half finale is a Broadway segment that truly stops the show. Both Donny and Marie have performed in several Broadway musicals over the years and the songs they selected for this segment clearly demonstrate their impressive vocal ranges and vocal dynamics. From the first notes barely above a whisper to the big finish, Donny’s haunting rendition of “Close Every Door” from Joseph and the Amazing Technicolor Dreamcoat and Marie’s stunning performance of “Climb Every Mountain” from The Sound of Music are absolutely thrilling!

The show-stopper in the second half is a dazzling and dynamic production number of “Boogie Woogie Santa Claus,” complete with colorful 1940s-style zoot suits and feathered hats. The segment begins with a solo saxophone in a slow jazzy tempo; then, the number picks up speed as the stars and the entire ensemble fill the stage.

The dancers are positively amazing as they perform powerful lifts, flips, and jumps effortlessly. And, this is not the only example of the dancers’ talent as you can see when they back up Donny in a spectacular hip-hop version of “Soldier of Love” and support Marie in a boot-scooting rendition of “Jingle Bell Rock.” Kudos to Choreographer Jaymz Tuaileva!

Donny & Marie: Christmas at the National is a non-stop, tuneful and energetic extravaganza that provides family-friendly holiday fun for Baby Boomers and the succeeding generations. Donny Osmond by himself or Marie Osmond by herself would be well worth your time, but a show with Donny and Marie together is not to be missed. Whether you’re a little bit country or a little bit rock and roll, you will definitely enjoy Donny & Marie: Christmas at the National!

Running Time:  Approximately 2 hours and 20 minutes, including one 15-minute intermission 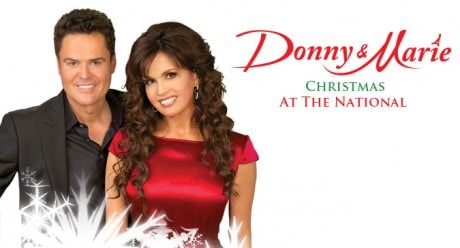