Newsies is a big, shiny helium balloon of a musical. Everything in it is designed for maximum lift and minimum drag — so you’ll have to jump fast and reach high to catch it in its short stay at Baltimore’s Hippodrome Theatre.

A thrilled opening night audience was clearly very pleased they did.

I missed the 1992 Disney movie, which never really captured its intended  audience, despite a new Alan Menken score (lyrics by Jack Feldman). It was based on the real-life 1899 “newsboy strike,” that pitted street corner urchins against greedy publishing titans like Pulitzer and Hearst.

This 2011 stage adaptation by Harvey Fierstein has more Menken music and much more youthful male dancing. Christopher Gattelli’s Tony Award-winning choreography includes over thirty breath-taking backflips and countless spins, leaps and other feats of unspecified athleticism. The way Newsies tells it, musicals are very much a young man’s game.

Often right there up front, leading well over a dozen spry young chorus boys, is Dan DeLuca, whose name you might as well memorize now since you will be seeing it on many marquees to come. Playing Jack Kelly, the leader of the impromptu newsboy strike action, DeLuca acts tough and streetwise, and he earns our respect along with the boys’. But Jack is also a talented artist with a secret ambition to escape the screaming New York headlines and find his place in the sun in Santa Fe, New Mexico, of all places.

If that makes little sense, it is emblematic of a book that takes big leaps with little payoff. Fierstein is best when he sticks with the ribs of his basic David-versus-Goliath narrative. When he tosses in a romance with the boss’s rebellious daughter or makes a wide sweep to include a brassy Bowery torch singer, the script appears poorer rather than richer.

Sometimes the performances validate the stretch, as when Angela Grovey, as the Bowery chanteuse, delights us with the ersatz ragtime ditty “That’s Rich.” She may be pure stereotype, but she’s pure stereotype-with-pipes.

When the stage isn’t laden with song or pyrotechnic dancing, it’s more likely to be leaden with stock figures whose names say it all: Specs, Crutchie, Race, Romeo, Mush, etc.

The romantic department is well represented by Stephanie Styles as Katherine, a pioneering female reporter who takes the side of the striking boys before getting swept off her feet by their even-more-striking leader. (Note to Harvey: Journalism doesn’t need another activist-partisan role model.)

The big romantic duet between Jack and Katherine, “Something to Believe In,” is pure Disney. Not to take anything away from the wonderful singing voices of DeLuca and Styles, but close your eyes and it could be a mermaid and her human prince.

The biggest voice in the cast belongs to Steve Blanchard as newspaper tycoon Joseph Pulitzer. He is presented as such a black-hearted capitalist pig that all stick figures everywhere should be offended. Still, Blanchard somehow manages to persuade us he is capable of serious character change before the final curtain.

All nitpicking aside, nothing else matters when the boards are thundering with the passion of a strike, or the chorus of boys sing out for justice in “The World Will Know” or “Seize the Day.” Best of all is “King of New York,” which sets Act II off like an explosion in a popcorn factory.

The wonderful set by Scenic Designer Tobin Ost is more elaborate than usual in touring shows. It consists of three, three-story scaffold constructions that shift into place with a cinematic fluidity to suggest a variety of interiors and New York cityscapes. The direction by Jeff Calhoun underscores the smooth transitions and keeps the stage picture attractive and as full of vigor as the young cast.

Running Time: Two hours and 20 minutes with one intermission. 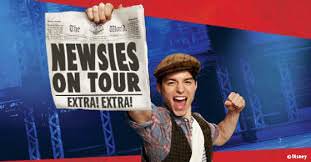 Newsies plays through December 7, 2014 at The Hippodrome Theatre at The France-Merrick Performing Arts Center – 12 North Eutaw Street, in Baltimore, MD. For tickets, call (800) 982-ARTS , or purchase them online.