WSC Avant Bard will celebrate its 25th anniversary with a one-night-only staged concert reading of A Klingon Christmas Carol—Charles Dickens’s classic tale of ghosts and redemption retold in Klingon—December 15 at Theater J. The show will be performed in Klingon (tlhIngan Hol) with English supertitles. Coincidentally, the Klingon language was invented for Star Trek by Avant Bard’s board president, linguist Marc Okrand, who will appear in the performance as Scrooge. Here he shares some of the vivid history behind this special event. And for earthlings unfamiliar with the Klingon universe, Marc offers some tips for enjoying the show.

Klingon in the Beginning

In The Trouble With Tribbles (watch it below), an episode of Star Trek that first aired late in 1967, a Klingon tests the patience of Federation engineer Montgomery Scott when he insults Scotty’s ship, the U.S.S. Enterprise, by saying it’s like a garbage scow. He goes on to say that half the quadrant knows this, and that’s why they’re learning something he called “Klingonese.”

He doesn’t proceed to speak any Klingonese—a barroom brawl breaks out instead—but his comment marks the beginning of the Klingon language. The first time anyone actually heard any Klingon was 12 years later in Star Trek: The Motion Picture. In that movie, a Klingon officer barks out commands to his crew in their own language, with subtitles for the rest of us. Unfortunately, he gets out only a half dozen or so short lines before his small fleet mysteriously dematerializes.

Those Klingon lines were devised by James Doohan, the actor who played Scotty in the original Star Trek TV series and movies.

Four or five years later, Harve Bennett, the writer and producer of the third Star Trek film, The Search for Spock, asked me if I would create Klingon dialogue for the villains in that picture. (He contacted me because I had devised the Vulcan dialogue for Star Trek II: The Wrath of Khan—but that’s another story.) I started with Doohan’s lines from the first movie, added sounds and words and grammatical structure, and coached the actors. I went on to expand the vocabulary and grammar for later Star Trek movies and TV shows.

The production crews of the various Star Trek shows took the language quite seriously, reshooting scenes if an actor pronounced Klingon poorly. Up to a point. Often, if an actor mispronounced a word but it sounded like Klingon, we let it go—and I changed the word to be what the actor had said rather than what I had originally intended (and made sure the actors said it correctly—that is, the new way—from that point on). If an actor said the wrong line but pronounced it well, or if an actor said the right line correctly but the producers later changed the subtitle, I had to devise grammatically coherent explanations for the homophony. Languages change and grow in mysterious ways.

The Klingon Language Takes on a Life of Its Own 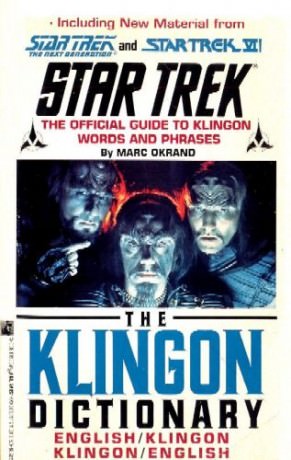 In the midst of all of this, I wrote a little book called The Klingon Dictionary. I had hoped that there’d be an audience for such a book, and some people did buy it, but then something happened that I hadn’t quite counted on. They read it. And studied it. And analyzed it. Minutely. A community of Klingon speakers developed, a group of people who not only spoke to each other and wrote to each other in the language, but also examined it and debated its fine points both adeptly and eloquently. An organization called the Klingon Language Institute was founded to advance the serious study of the language. At one time, the organization claimed to have members on all seven continents—including Antarctica. KLI members and others have translated numerous stories and songs into Klingon and have written stories and songs of their own. There are national and international gatherings of speakers. Pages in Klingon can be found all over the Internet, as can instructional videos and videos of songs. In 2006, the Guinness Book of World Records claimed Klingon was the world’s “largest fictional language.” In 2010, an all-Klingon opera called u’meaning “universe”—premiered in The Hague, and an invitation to the Klingons to come to the premiere was transmitted from a radio telescope in The Netherlands. They’re still waiting for a response.

In 1991’s Star Trek VI: The Undiscovered Country, the leader of the Klingon Empire says, “You have not experienced Shakespeare until you have read him in the original Klingon.” (This statement is followed by Christopher Plummer, playing a Klingon officer, saying “To be or not to be” in Klingon.) Because of this, the KLI has taken it upon itself to not translate, but to restore all the works of Shakespeare back to the original Klingon. In addition to a few sonnets, there are Klingon-language editions of Hamlet and Much Ado About Nothing. (There is also a bilingual edition of Hamlet in Klingon and Czech.)

And it may be that Shakespeare is not the only well-known literary figure whose works were originally in Klingon. Recent scholarship has apparently shown that Charles Dickens’s classic A Christmas Carol was merely an adaptation of the old Klingon story tlhIngan ram nI’ bom, or “Klingon Long Night Song.”

The Production History of the Play

Actually, A Klingon Christmas Carol—written by Christopher Kidder-Mostrom and Sasha Warren with Klingon translation by Kidder-Mostrom along with Laura Thurston and Bill Hendrick—premiered on December 8, 2007, in Saint Paul, Minnesota. It was a co-production of Commedia Beauregard (a theatre company in St. Paul that later moved to Chicago) and the IKV RakeHell of the Klingon Assault Group (a fan group). Though originally a one-night-only benefit event at the University of Minnesota, Saint Paul, it was such a success, they brought it back for multi-night runs the next couple of years, with Chris Lipscombe joining the translation team. An expanded version premiered in December 2010 in both Saint Paul and Chicago (two separate productions, both produced by Commedia Beauregard).

Commedia Beauregard produced the play in Chicago in 2011, 2012, and 2013, and they’re doing it again right now, though they say the Chicago production will not continue after this year. In addition to Commedia Beauregard’s presentations, the play was produced in Cincinnati in 2013 by Hugo West Theatricals and is being produced in Minneapolis this year by Arts Nest.

Avant Bard’s presentation, directed by Kevin Finkelstein, will commemorate the theater company’s 25th anniversary and be followed by a gala celebration.

Some Notes for Earthlings About the Show

While it may be safe to assume that most of the inhabitants of Earth—at least those in English-speaking parts of it—are well acquainted with the Dickens adaptation of the story, some aspects of the original Klingon version might be less familiar. For those in that predicament, the following brief guide is presented as a means to make Avant Bard’s production more meaningful.

Klingons are a warrior civilization, to put it mildly. They are a proud people for whom nothing is more important than honor. Except for fighting—honorably. As the proverb goes, “Klingons are born, live as warriors, then die.” They say they “fight to enrich the spirit.” But they also fight for fun. Klingon parties are riotous affairs, often fueled by bloodwine, filled with singing and storytelling. And fighting. A favorite food is gagh—worms that are still alive, drenched in a tasty sauce.

The Klingon Empire, according to Klingon history (or mythology), was founded by Kahless the Unforgettable, a great warrior who united the Klingon people after killing the evil ruler Molor. Kahless is said to have created the first bat’leth, or sword of honor, the most typical of Klingon weapons, by dropping a lock of his hair into molten lava. It is believed that when warriors die honorably, they go to Sto-Vo-Kor and spend the afterlife with Kahless in the Black Fleet. Upon the honorable death of a Klingon warrior, other Klingons gather around the body and scream or howl as a warning to the dead to prepare for the arrival of a great warrior. (The dishonored dead are not sent off so ceremoniously, and they wind up in a place called Gre’thor.)

In the story of tlhIngan ram nI’ bom, the main character, SQuja’ (Dickens called him “Scrooge”) lives dishonorably. He is a coward. He doesn’t understand those who want to be brave warriors. He never “traveled the river of blood,” that is, he was not successful when undergoing his Age of Ascension ceremony, a coming-of-age rite involving, among other things, being poked by sticks that inflict a good deal of pain. He’s not such a good Klingon. (He’s also a skinflint and a cheat and even sleeps with a pillow, but all of that is just incidental.) Nevertheless, he is a Klingon, so a visit from the ghost of Kahless (actually, three such ghosts) resonates powerfully. For a Klingon—even a Klingon such as SQuja’—nothing trumps being a Klingon. As the Klingons proudly say: tlhIngan maH! “We are Klingons!”