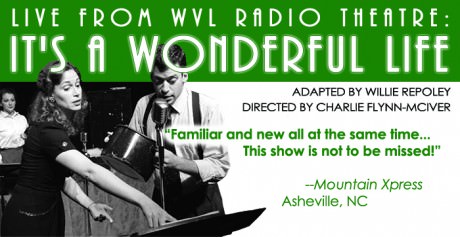 The iconic story of George Bailey, who finds meaning in life during a fiscal crisis, was re-formulated from its original film version into a radio play, complete with droll and hilarious sound effects. It’s A Wonderful Life, is a stage adaptation presented as a 1940’s radio show, as adapted by Joe Landry.

The story focuses on George Bailey, a man who has given up his dreams in order to help others, and who faces a bank crisis not of his making. He falls apart and contemplates suicide on Christmas Eve. This brings about the intervention of his guardian angel, Clarence Odbody. Clarence shows George all the lives he has touched and how different life in his community would be had he never been born. But there is also a frame story. The actors are merely last minute substitutes who are caught in a snow storm at the radio station. When the regular actors can’t get to the studio, stagehands and administrators are forced to improvise and play all the parts themselves, without rehearsal, in order to keep the station from closing down. So the actors are improvising both their roles and sound effects designed to create the ambiance of multiple places in the fictional town of Bedford Falls.

The four actors are extremely talented and they all rise to the occasion beautifully, each playing multiple roles, cast and crew, switching easily from one sentence in one voice to another sentence in another voice, which we can observe because we are privy to the behind-the-scene view. An actor plays George, and then his father, and then, and then….. Another actor plays a man, a woman, and later a tiny tot. There are at least 30 characters.There is an antic quality to the production as the characters litter the stage with pages of the scripts while they race back to their equipment to chomp on celery, bang a mock door or scrape a metal rod. The cast includes Allen Law, Lauren Kriel, Toy Larkin, and Blythe Coons, each of them displaying acting virtuosity and comic verve.

Prior to the performance there was a special children’s workshop showing how these sound effects are made and applied. This a technology called Foley Sounds, still in use in film, video, and cartoons. Usually it is specially trained technicians who use ad hoc materials to create footsteps, telephone rings, doors opening, and rain to help create a sense of reality into a scene, or even to place the action outdoors when outdoors settings are not available.

Radio plays were constructed starting in the ’30s which exploited actors capacity to create characters who used changes of accent, tone, and cadences rather than facial expression to define themselves. Sets were not needed. Sound effects took their place. Audiences were expected to use their imagination to populate the story with physical objects and never knew how they were being deceived. Foley artists used odd shoes, frozen lettuce, paper clips and other tricks to provide perfectly timed, synchronized sounds in a studio setting. The following is an example. 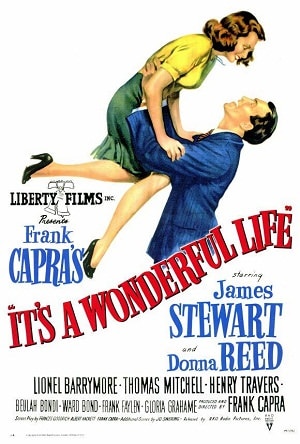 It’s a Wonderful Life was considered one of the most critically acclaimed films ever made. In its year it only lost out on the five Academy Awards for which it was nominated to The Best Years of Our Lives. Not only has this story inspired subsequent musicals, two or more radio plays, and a couple of spinoffs and sequels, but it has become a Christmastime favorite, drawing comparisons to Dickens’ A Christmas Carol, with it’s supernatural resolution, contrasting Christmas Present, Past and Future. The story was criticized initially as overly-optimistic, too sentimental and oversimplifying social problems and their potential solutions.

Nevertheless, it was also criticized in an FBI memo on May 26, 1947, stating  that the picture represented rather obvious attempts to discredit banks by casting Lionel Barrymore as a “Scrooge-type” so that he would be the most hated man in the picture. This, according to these sources, is a common trick used by Communists. Screenwriter Dalton Trumbo and other blacklisted writers were uncredited contributors to the script.

It’s a Wonderful Life: Live from WVL Radio Theatre played for one night only on December 6, 2014 – 1209 Town Commons Drive, in  Germantown, MD. For future performances go to their performance calendar.