Sixty years after Reginald Rose wrote the script for a television film version (Watch it at the bottom of this review) and 59 years after it was adapted for the stage by Sherman L. Sergel, Twelve Angry Men is more relevant than ever, and it’s being given a powerful and emotionally-wrenching production at 2nd Star Productions.

A father is stabbed and killed by his son. It’s supposed to be an open and shut case. There are witnesses who testified under oath that they saw the accused young and troubled man commit the crime and/or saw him run away after the crime was committed. Or maybe they didn’t. Maybe they though they did. And when one man stands alone – Juror #8 (Gene Valendo) – and wants to discuss the evidence one more time so there will be no ‘reasonable doubt’ in his mind when he votes for acquittal or conviction, he encounters strong opposition from Juror #3 (Ken Kienas) and the other jurors who have quickly decided that the accused is guilty. Will this new examination change any of the jurors’ minds and votes?

Director and Set Designer Jane B Wingard, has assembled a superb cast that grabbed me from the very get-go. And for almost two hours I sat in this ‘jury room’ riveted.

Yes-I had seen the famous film adaptation with Henry Fonda (Watch it below) and loved it. And yes-I had seen other productions of Twelve Angry Men before, but I have never seen this classic jury-room drama in such small quarters and’ in the square.’ And Director Wingard keeps it simple and effective with a long table with chairs, a blackboard, and a tall fan, and a group of superb actors. Sometimes simple is all you need, especially when you have such a glorious script. Here simple is perfection.

If you ever wondered why Twelve Angry Men  is still one of the most compelling pieces of drama adapted for the theatre – then you must experience it at Second Star Production’s new satellite theatre space – in the West Arundel Center for the Arts, in Odenton, MD. Twelve Angry Men is the perfect play for this space.

It’s not only the jury who is ‘locked in’ for deliberations – it’s the jury and the audience – and there’s no escape (until intermission -and only for a few minutes). As the jury door closes shut we are sucked into the screaming, the accusations, prejudice, frustration, and emotional turmoil, and yet the civic pride and duty that is part of being a member of a jury in this country (“We have a job to do…”) peeks through the turmoil that these 12 angry men are encountering.

As we watched two grand juries decline to indict two policemen accused of killing two alleged unarmed African American men in the past 10 days, these two events were constantly in the back of my mind as I watched the play unfold. And I was not surprised to hear people talking about these two recent events at intermission and while they were walking to their cars after the show.

Because we weren’t in those two grand juries  and in those two jury rooms-we really don’t know the evidence that was presented to them, but we do know that that evidence did contribute to the decision not to indict these two officers. What we did see, unfortunately, were two distraught families of the victims and some looting and destruction of property after the news was released.Buy here – in this ‘sweltering’ small jury room – we hear the evidence and we get to watch some of the actual eyewitness testimony reenacted and analyzed over and over again. I kept wondering how I would vote. I felt like I was Juror #13. And frankly, I don’t know how I would have voted – but as the former litigation paralegal manager of my younger days, who worked dozens of trials, I would have wanted to see and read all the evidence before I made up my mind.

Which now leads me to this incredible ensemble-and it is a group of actors who work together like brothers -and are so convincing in their performances. Credit goes to Director Wingard for not turning these 12 jurors into cartoon characters and one-dimensional portraits. These performances are real and honest. And as these characters go through this difficult roller-coaster of a journey you may disagree with their behavior or beliefs but you can’t hate them. In fact, I respected some of these characters for the first time ever after seeing this play numerous times, and that’s because no one tried to overpower anyone. Every character was equally important in this production and the chemistry between the cast members and characters was overflowing, making their performances so relatable. 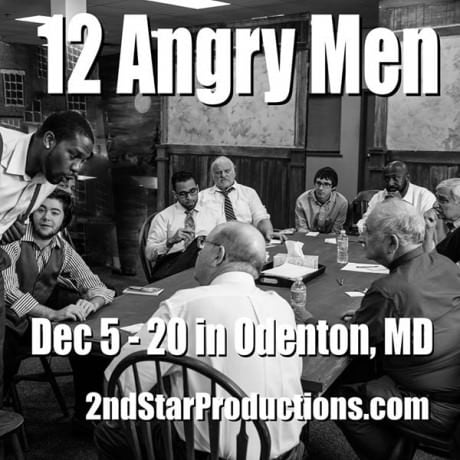 So let me introduce you to the cast of jurors and the fine actors who portray them:

Joining them at my performance on Sunday, December 7, 2014, were Kim Etheridge (Judge) and Joanne D. Wilson (Guard).

On Count 1: Producing a powerful theater experience that today’s audiences can relate to: GUILTY!