Many of the greatest things in life just better with time, and Signature Theatre’s annual celebration of the holidays—Holiday Follies—is certainly no exception.  Under the direction of Walter Ware III, the fifth annual Holiday Follies is a quirky, choose-your-own holiday adventure that will invigorate the soft gingerbread-loving, egg-nog-slurping, Santa-Clause-anticipating caroler in you. 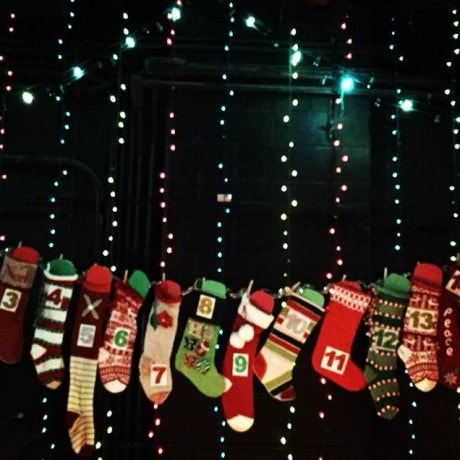 This popular holiday cabaret took an interesting turn this year with a “Choose Your Own Stocking Adventure” Holiday Follies. After each song, audience members would shout out a number corresponding to one of seventeen stockings hung upon a string of glittering lights adorning the back wall of the stage. With a Christmas tree adorned with lights and ornaments beneath a sea of twinkling multicolored lights and presents beneath, the set was the epitome of holiday yuletide.

Situated on the left side of the stage was the two-man ensemble that brought the evening to life: Musical Director/Arranger/Pianist Howard Breitbart on piano and Paul Keesling on the drums.  The two “tuned that piano to the key of glee” as promised, delivering a cornucopia of holiday favorites and a few new tunes in a vivacious and infectious fashion. With piano and drum solos scattered throughout, the music shook even the most stoic of audience members into song and dance.

Opening with a hopping rendition of “Run Run Rudolph” by Chuck Berry, the group quickly jumped into the choose-your-own-adventure mode. The first two songs of the evening happened to be cute and energetic, setting a uniquely peppy and animated tone throughout the show. Delores King Williams opened with a rendition of “What Christmas Means To Me” by Stevie Wonder that energized the crowd, and the group followed with “Cool Yule” by Louis Armstrong and popularized recently by Bette Midler’s Christmas album of the same name.

Bayla Whitten followed with a touching performance of “Everyday,” followed by Stephen Gregory Smith with a similarly heartfelt rendition of Ingrid Michaelson’s “Snowfall.” What was interesting throughout the night is how, even when the songs are selected at random, the cabaret still somehow builds an emotional arc in real-time. The entire experience—though randomly ordered—still managed to be artistic and moving, a testament to the quality of the performers and the smartness of the individual song selections. Due to a well-balanced set under Ware’s direction, the whole became more than the sum of the parts.

The next session was certainly a fan favorite. Stephen Gregory Smith performed a hilarious piece from the hit movie Frozen entitled “In Summer,” and Delores King Williams daringly performing the bonafide holiday hit “All I Want For Christmas Is You.”

Intermixed was an improv session in which holiday songs were chosen at random and sung in the style of familiar Broadway hits. Signature Theatre might be the only place to see “Joy to the World” sung as Cabaret or “Santa Claus Is Coming To Town” as Fiddler on the Roof. The laughter was riotous.

One of the funniest moments of the evening for me was when Bayla Whitten and Gannon O’Brien played lovers in “Text Me Merry Christmas,” originally performed by Kristen Bell and the a capella group Straight No Chaser. As one of the younger audience members that evening, it was hilarious seeing our generation parodied in the most public and endearing of fashions.

Delores King Williams and Bayla Whitten teamed up for a beautiful duet of “Winter Song” originally co-sung as a duet by Sara Bareilles and Ingrid Michaelson. The two also did back-to-back covers of Barbara Streisand’s “Summer Me, Winter Me” and “Warm All Over” from The Most Happy Fella.  Both had very unique sounds, and the contrast in their voices worked in harmony to create a harmonious musical experience.

Gannon O’Brien got the all-star number of the evening, singing the iconic “Christmas Song” that brought tears to a few of the couples around me. With his deep vocals as he gazed longingly into the audience, the number perfectly captivated the intimacy of the holiday season and the emotion emanating from so many holiday classics.

The group finished with the rousing “Rockin’ Around the Christmas Tree” and the iconic encore number “What A Wonderful World,” the Louis Armstrong classic. Appropriately, the song was an exclamation point on an evening that reminded us all about the wonder of the holiday season.

Holiday Follies plays through December 23, 2014 at Signature Theatre—4200 Campbell Avenue in Arlington, Virginia. For tickets, call the box office at (703) 820-9771, or purchase them online.

Nostalgic ‘Meet Me in St. Louis’ charms at Riverside Center for the Performing Arts