Winnie the Pooh: A Christmas Tail is at Other Voices Theatre is a delightful Christmas show for both young and old audiences. An approximately hour-long interactive children’s show, wonderfully directed by Susan Thornton and excellently musically directed by Cathie Porter-Borden, this charming tale is sure to entertain all audiences.

Inspired by the original stories by A.A. Milne and featuring music and lyrics by James W. Rodgers, Winnie the Pooh: A Christmas Tail describes a very special Christmas Eve in the Hundred Acre Wood. Pooh and his many friends are getting ready for their big holiday party by picking out presents, decorating trees and, of course, baking sweets with lots of honey, when they discover their close friend, Eeyore, has lost his tail. All of the characters have to work together and discover the true meaning of Christmas spirit as they race to help their friend find his tail in time for the big holiday!

The production is audience interactive, and children have numerous opportunities to participate in the story, while adults can enjoy a nostalgic look at loveable characters from their childhood. Particularly impressive were the amount of talented child and teenage performers in the Christmas children’s production.

The title character, Pooh, played by Calle Colburn, was very jolly and had a warm and loving stage presence. Her scene featuring her “stoutness exercises” after feasting on honey was hilarious. As constant sidekick Piglet, Jacob Holcomb was very cute and sprightly. Holcomb was very adorable to watch, though he may need to increase his speaking volume as a few lines were lost.

Brady Johnson was very energetic and engaging as the only human character, playmate Christoper Robin. He opened the show with great enthusiasm and got the young children excited about the production.

Rabbit, played by Kiersten Gasemy, was a delight to watch. Her portrayal was wonderfully precise and cranky and Gasemy was very funny as the strictly organized rabbit. Likewise, Drew Gasemy was very sharp and refreshingly sassy as the knowledge (or perhaps know-it-all) Owl.

Rose Kelly as mother kangaroo Kanga was very sweet and loveable, with excellent diction on her rapid-fire patter song. Katharine Ford as baby kangaroo Roo was absolutely adorable and a lovely addition to the cast.

The aforementioned characters were all portrayed by child or teenage actors, who did a fantastic job in this production. However, the supporting characters of Eeyore and Tigger, played by Peter Meyers and Shawn Nakia, respectively, were instant audience favorites. Nakia as Tigger was very charismatic and true to the character description, extremely bouncy and full of energy. The moment when he bounced into and through the audience was great fun in the interactive show.

Meyers had an interesting challenge as Eeyore, the only character who is not high-energy and enthusiastic to entertain young children immediately. Instead, he found the perfect balance to entertain children and adults, delivering dry, sarcastic lines in a great monotone voice and adapting a wonderfully mopey physical posture which lessened as he became less and less pessimistic throughout the show.

Winnie The Pooh: A Christmas Tail features a gorgeous woodland set by Maggi Gasemy. A few simple Christmas pine trees, a sturdy log center stage and beautifully painted backdrop create the perfect Hundred Acre Wood everyone remembers from childhood stories and sets the perfect stage to allow the characters to act the tale for the children hearing the story for the first time in the audience. The costumes, designed by Lee Hebb, are largely one piece suits made of felt and velvet, allowing the actors plenty of movement and recreating the iconic characters instantly. The facial makeup the actors wear is incredibly detailed and matched the costumes perfectly. Thornton, in addition to directing, also designed the sound and lighting, ranging from clear, simple designs for full cast numbers to intimate, softer lighting designs for heartfelt duets, which only added to the excellent production.

Run Time: 50 Minutes, with no intermission. 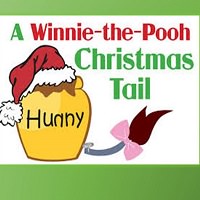 Winnie The Pooh: A Christmas Tail plays through December 27, 2014 at Other Voices Theatre performing at the Performing Arts Factory – 244 South Jefferson Street. in Frederick, MD. For tickets, call the box office at (301) 662-3722.