“Really? A pre-teen wrote this? No way!They did? Wow!”

Those were my thoughts as I was drawn into the celebration of “the best of” twenty years of playwriting by elementary and middle school students in the DC metro area through Young Playwrights’ Theater’s classroom-based program. Brought to life by local theater companies, each playwright’s distinctive voice was breathtaking.

Over half of the short plays dealt with issues of social and economic justice or how situations can change human relationships; others involved superheroes and fantasy. I was struck by how perceptive these young writers were about the worlds they inhabit. 98% of the students with which Young Playwrights’ Theater (YPT) has worked qualify for the Free Lunch Program and 95% attend schools that receive Title I Federal Assistance. One-third speak English as a second language.

Starting in one classroom of 20 students in 1995, YPT has grown to work with 2,000 students each year. In classrooms with a YPT program, students are given the opportunity to write plays about what matters to them while also improving their reading and writing skills. During the process, they also get to work with professional playwrights, actors, directors and teaching artists in the classroom.

I simply cannot say which play or performance was “better” than another.  Some were hilariously funny and involved intriguing plot and character twists, as well as use and abuse of super-powers.

Tornado Boy, by Antawan Taylor, Magnet Dude, by Kythram Franco, and The Enemy Attacks! by Julia Winkler were all fine examples. Others, such as Love What! No! Me a 10 Year Old! What Uh-Oh!! by Mayra Rivera and Love, Math and Martians Don’t Mix,” by Cassidy Boomsma, gave insight into the “coming of age experience.”

I was particularly drawn to those that dug deepest into emotions and underlying assumptions about others. The Stranger, by Sam Burris, explored how one veteran overcame the voices of fear that ruled his life. The Elevator, by Nora Spellane, spoke directly to individuals’ mutual racial profiling. Color Lines, by Sheila Walcott, examined assumptions in inter-racial dating. Mariana’s Wish, by Mariana Pavon Sanchez, made palpable the tension and desire built up in a family separated by immigration. Changing Tides: Judge Me Gently, by Amber Faith Walton, highlighted the difficulty social activists in one generation, have in accepting the new challenges of those in subsequent ones. Society Unjust, by Shannon Marshall addressed the implicit tension of gentrification where entire communities of several generations are being torn apart. Rare and Exotic, by Josh Perles, addressed treatment of those facing mental challenges as ‘less than human’ in a new way.

In addition to programs in DC, YPT has given workshops in areas of the former Soviet Union and in present-day Russia, India, China, Texas, and Detroit. The first full classroom program outside the DC area is at Garcia Elementary School, which lies only 5 miles from the US-Mexico border in Texas. YPT was awarded a $50,000 grant that enabled them to partner with Detroit-based InsideOut Literary Arts Project (iO) and others to use state of the art audiovisual equipment to connect a classroom in Detroit with one in DC to facilitate a cultural exchange of playwriting, poetry and media arts was presented last spring.

To celebrate their 20th Anniversary, YPT has, as its goal, the funding of 20 more classrooms, at $2,000/classroom, for the 2015 – 2016 school year. To learn about donating, or to donate directly, follow this link.  More information about Young Playwrights’ Theater and its programs can be found here.

In addition to maintaining an interest in the Young Playwrights’ Theater, I’m definitely checking out the websites of some of the many theater groups that performed. 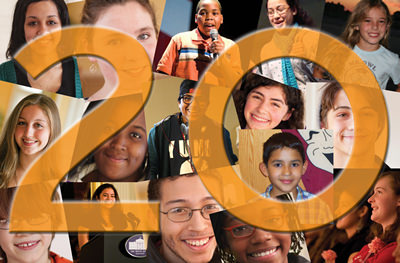 The 20th Anniversary Festival by Young Playwrights’ Theater was performed for one night only  on Friday, December 12, 2014, at Theater J – 1529 16th Street, NW, in Washington, DC.