Vienna Theatre Company is rehearsing Ken Ludwig’s romantic comedy Be My Baby. Opening night is January 23, 2015 and will run for three weekends. Rehearsing during the holidays can be a scheduling challenge and as producer, I sometimes feel like I’m herding cats together just to make sure we’re all on the same page.

Be My Baby premiered in 2005. It’s about love between mature individuals as well as young. It has a cast of 6 with two actors nimbly playing multiple roles. The setting is both the Scottish countryside and California and the characters are either Scottish, English or American. The cultural and class differences between the characters sometimes clash to create some of Ludwig’s delightful comedy in the play. 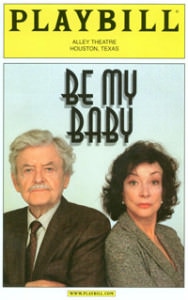 Though it premiered in 2005, the play is set in 1963, on the cusp of the mod era in England and the “hippie” culture in America. The play immerses you in that decade starting with the eponymous title taken from the 1963 Ronettes hit musical single “Be My Baby” to Elvis, fashion, changing social and sexual attitudes. This is all an interesting lens through which to see mature love unfold and young love meet its challenges.

It tells the story of John, an irascible Scotsman, and an uptight English woman, Maud, brought together when his ward marries her niece and the young couple decides to adopt a newborn baby. The older couple has to travel to California to pick up the child and bring her home to Scotland but John and Maude despise each other. While in California, they learn some startling lessons about life and love.

A consideration in production is working towards authentic Scottish and English dialects. We are lucky to have an actual Scot in our cast, John Barclay Burns who portrays John in the play and is a great resource for keeping cast on track with dialect. Other actors are Casey Bauer (Gloria); Danny Issa (Christy); Allison Shelby (Maud) ; Eric Storck (Male) and Meg Hoover (Female) are in the Ensemble and play multiple roles throughout the play. Director Suzanne Maloney has designed an interesting set that allows almost cinematic transitions between scenes.

One thing I personally like about the play is that it has a happy ending. Maybe that’s a definition of romantic comedy but to see a happy ending is a good reason, these days in particular, that you can enjoy Be My Baby.

Tickets are available to purchase in advance at The Vienna Community Center, or at the door.