Boxes, produced by RoseProse Productions with direction and script by Ebony Custis, is a series of vignettes that represent the compartments – aka – the boxes of our lives. Custis’ concept is excellent but the lengthiness of some of the scenes takes away from metaphorical references as to, “What are you going to keep in your box?” or, “What are you going to take out?” This is dark yet powerful subject matter that touches on parenting, jealousy, excessive behavior, and unwanted pregnancy. The cleverness of the show is demonstrated in the varying sizes and color of the boxes used for seating and changing the placement from scene to scene. 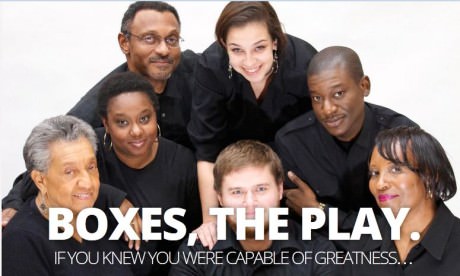 The opening scene begins with Cynthia Rollins playing Nana, a matriarchal role to Greg Watkins playing her grandson. Rollins is a gentle powerhouse with her words of wisdom whereas Watkins is spirited with this youthful character. He dreams of becoming a surgeon despite the poor treatment he receives from his mother.

In Scene II, Gayle Carney is a mother auctioning off her daughter, played by Lauren Schneider. Unfortunately, the daughter is 30, jobless, and living at home. Trying to find her way in life, mother feels her daughter’s best bet is marriage. The three men pursuing her are Michael McGoogan, William Powell, and Greg Watkins. As each guy offers conditions – and not favorable ones – to their prospective marriage, Carney fervently reveals her jealousy toward her own daughter. Schneider offers a level of fear with penetrating facial expressions as her mother scorns how she was the one who did all the cooking and cleaning, but her father was always interested in her.

Scene III gives the audience a peek into the emotional side of the boxes – guilt, loss, suffering – but most of all – letting go, while Scene IV has the cast performing short monologues about the corporate arena. Schneider bursts with excitement as she finally opens her box to realize her purpose in life – despite the naysayers surrounding her. Here Act I closes with the idea of finding your own box.

Act II moves into the realm of social and economic challenges as actress Lynnette Franklin steps into the spotlight as a gal in therapy and in trouble. The language exchanged between Franklin and Carney as the therapist is powerful and dramatic. Of course there is an underlying theme that goes along with her story of abuse and neglect. These two actresses on stage really balance each other’s performances that provoke some deep thoughts and emotions as well.

“Don’t judge a book by its cover” is the theme suggested in Act II, Scene II as Michael McGoogan, William Powell, and Greg Watkins hang out drinking in an alley. But looks can be deceiving and McGoogan and Powell’s stories reveal more and different from their disheveled looks. Watkins rises to the occasion, dressed to the nines in a three piece suit, tells that he just got fired, thus proving what you see is not always what is.

Scene III opposes the prior scene, picking up with the pregnant patient moving into her own tiny apartment in a not so savory neighborhood. Franklin is all emotion in relation to her soon-to-be-single motherhood status. She harbors an anger feeling that she has nothing to offer her unborn child. Rollins as her mother is the optimist but is unable to give her daughter the answers she craves.

Scene IV’s storyline is not as clear-cut as the ensemble cast and McGoogan travel into a less realistic realm.

Boxes poses many important questions, but as you leave the theatre you may want to take some great advice from the show: “Start living!”

Boxes plays through January 11, 2015 at RoseProse Productions performing at the Bowie Center for the Performing Arts – 15200 Annapolis Road/Route 450 in Bowie, MD – next to Bowie High School and the Bowie Public Library. For tickets, purchase them online.