The Good Doctor is a play written by famed playwright Neil Simon. First produced on Broadway in November of 1973, this show is not widely produced by Community Theatre. Undaunted, Upcounty Theatre and Director Michael Abendshein conquers it admirably.

The Good Doctor takes several short stories of renowned writer Anton Chekhov and whittles them down into 10 playful vignettes. These tales are all tied together with the character of The Writer, played by Jeffrey Smith. Most regard this character as a caricature of Chekhov himself.

The first vignette is called “The Sneeze” and was a highlight of the evening. A government clerk goes crazy after sneezing all over a general while attending the opera. The star of this story, playing the awesomely awkward title role, is Jason DeMarchi. DeMarchi was a joy to watch as he had excellent energy in this farcical character and he deserves high praise for his work. He is joined by the hysterical Meg Williams (Madame Cherdyakov), Michael Sigler (The General), and Joni Donlon (Madame Brassilhov).

The second story called “The Governess” is about an upper-class mistress and her put-upon Governess (or Nanny) played by Amanda Wesley. Cathy Lipton charmingly plays the treacherous mother, who is out to swindle her staff. Wesley plays her meek counterpart well, and has an uproarious crying scene.

The vignette “Too Late for Happiness” makes for the most moving content of the show. Actors Bruce Rosenberg and Chris Veirs are touching as a later-in-life would-be lovers in the only musical number in the show.

“The Drowned Man “. .err . . “The Drowned Woman” is also quite amusing. Amanda Wesley is outrageously funny as the Tramp who pretends to be drowning. Joining her are Actor Jefferey Smith as the patron of the tramp, and the equally comical Mark Smith, as the police officer.

Actress Jen Katz is outrageous in”Surgery” (with Jason DeMarchi)- where a visit to a dentist proves to be more painful than the toothache that brought her there, and in “The Audition” where she plays an overzealous actress who spends most of her audition going gaga over The Writer. Here Katz starts off as a meek, unsure actress but the scene ends in a ‘must see’ transformation.

Not to be outdone-Joni Donlon, Kelly Peters, and Autumn Orme are exceptional in the short play “A Defenseless Creature,” where a woman tries to convince a banker to give her money for her injured husband.

“The Arrangement” is about The Writer’s father who takes his 19 year-old son to a brothel to make him a ‘man.’ The story examines 19th Century misogyny and the director has made an interesting choice to have a a young actress play The Writer. There are first-rate performances from Michael Sigler,  Autumn Orme, and Becca Korn,who plays the Young Writer.

Special kudos to Jeffrey Smith who plays The Writer. He wove in and out of each story exquisitely, playing many characters throughout the show.

The final Bravo goes to the three actresses who came in to the show at the last moment: Joni Donlon, Kelly Peters, and Autumn Orme. They did a fine job playing their numerous roles.

Director Abendshein has an able design team who brings his simplistic vision to life on the stage. Set Designer and Assistant Director Alex Adams painted many of the backdrops with great detail. Adams even painted several Russian Icon paintings to adorn the front hall which was a nice touch to bring audience members back to 19th Century Russia, and each painting is beautiful in its own way.

Upcounty Theatre’s The Good Doctor is a well-acted and directed production and I encourage all of you to see it during this upcoming final weekend.

Running Time: Two and a half hours, with one intermission. 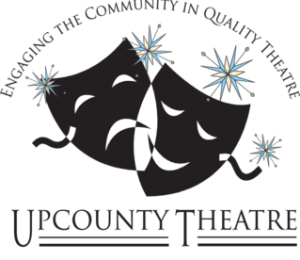 The Good Doctor plays through January 17, 2015 at the Black Rock Center for the Arts–1209 Town Commons Drive, in Germantown, MD. Tickets are available at the door, or purchase them online.