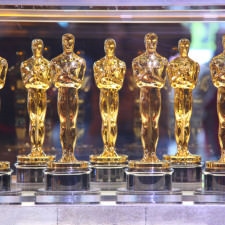 We are pleased to announce that the February 23. 2015 show will have a section devoted to Oscar nominated songs. We are soliciting vocalists, musicians, and possibly poets to reinterpret one of the 296 songs nominated in Oscar History 1934 through 2015. The list is staggering from Lego’s “Everything Is Awesome” (2015) to “They Can’t Take That Away From Me” (1937)

If interested, please send the following:
1. your name (and other vocalists or instrumentalists performing a duo or group)
2. the title of song, film its from and year it was nominated
3. your concept interpretation of the piece i.e. straight up as is, up tempo, slower, with ukelele etc…
Please note: karaoke tracks will not be accepted.

You can propose up to 3 choices and we will narrow the list down to 8 selections for show and will be based on variety of song style, and songs that represent the 1930s through today. We would like your proposals by February 2, 2015 and we will notify you if selected by February 9, 2015.

We are looking for choices that suit the performer(s) style, songs that are outside of the box and a proposal that can be executed with little rehearsal and can be staged within the James Hoban’s space. We want to celebrate the variety and stylistic range of songs over the last 9 decades.

Here is a link with all 296 Songs to choose from:

Curated and hosted by Don Michael Mendoza and Regie Cabico, La-Ti-Do made its debut to a full house in Washington, DC on January 23, 2012 at The Black Fox Lounge in Dupont Circle and since then, it has become Washington, DC’s premiere musical theatre cabaret and spoken word series to serve the DC artistic community on a weekly basis. The show then opened a touring chapter in New York City on June 9, 2013 at Bowery Poetry Club and continues to do so on a monthly basis. Most recently the show moved from Black Fox Lounge to James Hoban’s Irish Restaurant & Bar in DC and re-launched on January 12, 2015.