The 32nd Annual Choreographer’s Showcase at The Clarice offered up an evening of dance ranging from the outwardly exuberant, to the internally nuanced, and emotions in between. The evening’s choreographers were articulate, both in their messages through movement and their abilities to speak about the works the audience witnessed.

The first work on the program, Exuberant Oafs, an excerpt from the full-length work creature, choreographed by Kimmie Dobbs Chan and co-directed and lighting designed by Enoch Chan, follows a rather detailed journey in a world seemingly unlike our own but with more similarities than we may like to think exist. The dancers, clad in fanciful white overalls, sports bras, goggles, facial masks, and hoods, walk on an imaginary grid, each with purpose and determination, in a beautiful symphony of non-verbal gestures, sighs, etc. One dancer, center stage, going through a rather visceral, convulsive experience, goes unnoticed for a while, representing a patient zero of an outbreak of sorts. What transpires is an all too familiar scenario of gradual public attention as more cases break out, an almost frenzy of multiple cases and awareness, expressed through full bodied movement penetrating the space with a palpable ferocity, and then the society reverting into unawareness, but the disease is still real for those enduring it. Both artists discussed their use of a heightened world to explain our present world in this work, as well as their use of spectacle, story, character, and mystery, which are all present and integral to the work. Kimmie Dobbs Chan’s choreography beautifully illustrates the arc of the work, with its full-bodied nature and the sprouting up of duets and trios unexpectedly. The dancers move through all planes of space, sometimes seeming to exist in multiple planes at once, be it leaping up into the air and then back down to the ground in a solid grand plié, or rolling over their shoulders and spiraling into another floor inversion. The dancers (Christy Bartholomew, Terra Bergamy, Catherine David, Katie Johnson, Abby Magalee, Lauren Marsden, Katie Schiaffino, Ryan Tumulty, and Dana Yasek, are to be commended for their adroit athleticism, grounded performances throughout the work, and technical prowess with each and every movement of Chan’s choreography.

The second piece on the program, shadow hers/shadow mine, choreographed by Robin Neveu Brown and performed by Brown and her husband Kevin Alan, was performed in silence, in and around a rectangle of mason jars of various sizes and colors. This piece, a companion piece to Brown’s upcoming thesis project entitled Projects for the Living, charted a relationship between two people, be it through memories replayed in their heads or in real time but on a slow motion speed. The piece began with the approach of Brown to Alan in tableaus cut off with blackouts, of her existing in the abyss outside his rectangle to the two of them existing in the same space, you see the evolution of an awareness of another human. While there was no music accompanying the piece, I definitely felt the inherent heartbeat of each scenario, from the periods of disconnect in any relationship, be they however brief, to the moments of rapturous excitement and thrill, expressed here with a moment of partner dancing (a square dance of sorts). The sense of comfort of Brown and Alan in the world they created, both thematically and spatially, allowed the audience to relax into the work, and this casual tone allowed for the piece and the partnership to succeed. Brown mentioned her interest in making the every day beautiful, in a post-performance discussion, and that idea is present in the work, and deepened my interest and investment as the piece progressed. 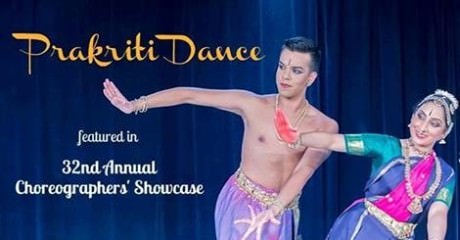 Swaralayam, the next piece on the program, was choreographed and performed by Kasi Aysola and Madhvi Venkatesh. Aysola and Venkatesh danced this beautiful Bharatanatyam work in gorgeous synchronicity with each other and the music. The nuanced gestures in the work, and detailed, rhythmic footwork came across wonderfully, and that they were in such wonderful unison with each other elevated the work. There was a wonderfully dynamic play between the moments of movement in specific pools of light and the movement that carried the dancers throughout the stage space, and the music harmoniously brought the dancers and the audience along on the journey. In the post-performance discussion, both artists mentioned the piece stemming from a place of wanting to play with rhythm, melody and the variations within them, and they succeeded on all levels.

Christopher K. Morgan’s work Bruised, danced by Nicholas Brock and Thomas L. Moore Jr., included an original score composed and performed by Wytold. The duet explores the intricacies of two bodies in space, each on their own journey, and what happens before, during, and after the impact of coming into contact with another body. While moments from every day life can be extracted from the piece, such as bumping into a stranger on the street, or being in a conflict with someone, Morgan uses his choreography to flip real life on its head. For instance, out of an apparent anonymous bump center stage, Brock and Moore engage in a supple and lithe duet supporting each other in fabulous feats both upside down and right side up, almost as if to say that out of bumping a complete stranger can come something beautiful, such as the acknowledgement of another human living on a parallel plane. Wytold’s music beautifully coincides the interactions between the two dancers, and mirrors the plane(s) of space the dancers traverse. Morgan’s choreography expands one’s perceptions or preconceived notions as to what the human body is able to accomplish, and his eye for partnering work allows for even greater human feats. Brock and Moore twist themselves into and out of pretzel-like contortions with ease, and fill the space around, below, and above them with fabulous extensions, backwards arches, and much more. Morgan mentioned his shift away from seeing dance as a mirror to our lives, but rather refracting our lives, and presenting an audience with a heightened, beautiful reality. We should all be so lucky as to have our refracted reality be a duet as intricately nuanced, and wholly rapturous as Bruised.

Blue Eyes, choreographed and performed by Emily Heller, used a poem about a lost loved one, written and recorded by the dancer, as well as rhythmic beats of lines chosen not to speak, and other sounds. The choreography and elaborate sound score work in harmony to tell the story of loss. This story is fresh, and new, as Heller’s choreography has dynamic range of sharp and subtle qualities, and explores multiple planes and themes of movement, almost as if the length of the piece explores her unique journey along Elizabeth Kubler-Ross’ stages of grief. Not only is Heller’s composition and sound score amazing, her performance is also stunning. Her combination of abandon and control and the way she plays with them both is visually arresting. The nuance and specificity with which some of the sections are crafted is truly remarkable. Heller mentioned, in a post-performance discussion, that she creates her work with deep meaning for herself, and then she hopes the audience experiences something, be it her intended meaning or otherwise. In this case, I would say the piece is rapturous on multiple levels, her intended level included.

Frequency, choreographed and performed by Colette Krogol and Matthew Reeves, set to a detailed sound score of Jim Reeves, Willie Nelson, and Nancy Sinatra. The duet played out expressions of unrest, both mentally and physically, and how we can show unrest outwardly, or mask it with a meticulous attention to detail in subtle gesture. The use of two flashing television screens, as well as lighting, and a speaker and cords both created a setting for this work and helped the arc of the work. The awareness of the two dancers to each other and their setting, especially in a unison duet of full-bodied movement with a great deal of abandon was truly stellar. As the piece progressed from a score of solo dancer doing full-bodied movement as the other dancer stood still or performed starkly subtle gestures, to a unison of full on abandon, to a duet of control mixed with punctuated moments of that solo abandon, the audience was able to see what another body does for the expression of unrest. In this instance, the presence of another body allowed for the unrest to be channeled into action. IN the post-performance discussion, Reeves and Krogol discussed their intentions of creating an experience for themselves, as well as an atmosphere, and then hoping that the audience feels, shares, and/or empathizes with what they’ve created. This piece, what with its detail and the specificity with which each element was chosen and placed, is an experience that transcends the stage.

The final piece of the showcase, and the Audience Choice Award Winner, was Taurus Broadhurst’s 1960 What?, danced by Celia Benvenutti, Kevin Bouknight, Malachi Elijah, Gabby Jones, Bria Murphy, Kevin White, and Alissa Wilson, with live spoken word by Goodie Dean, was a vibrant call to action. The dancers, in various pedestrian clothing, were full of life, dancing big phrases sweeping all across the stage. The weaving in and out of each other, as well as the entrances and exits of dancers was unexpected and exciting. Sections of the piece lead by Dean’s spoken word had dancers beautifully framing her as she spoke her powerful poetry. Giving such an athletic and intricate piece a focal point of another art form at times was a dynamic choice for the work. While the piece, created in honor of the 50th Anniversary of the March on Washington for Jobs and Freedom, is danced in front of a projection of iconic images from the time. While this piece speaks to post-Ferguson America in a rather interesting and dynamic way, Broadhurst created the work prior to the events of Ferguson.

As per usual, the Choreographers’ Showcase at The Clarice provided an evening of dance of varied tone and style, and was all-around entertaining. I look forward to seeing more work by the artists showcased, such as Kimmie Dobbs Chan and Enoch Chan’s full-length Creature, or Robin Neveu Brown’s thesis project Projects for the Living, or Taurus Broadhurst’s work after his Audience Choice Award Winner residency at Joe’s Movement Emporium, to name a few.

Running Time: 1 hour and 20 minutes, with one 15-minute intermission.

For more information on the artistic offerings at The Clarice – 3800 The Clarice Smith Performing Arts Center, University of Maryland, College Park, MD – visit their website.