Think that sword swallowing, fire eating, and burlesque are all lost entertainments of a bygone era? Think again. Strange for Hire, presented by Shocked and Amazed! and Ripley’s Believe It Or Not, brings the bizarre and spectacular to a stage right here in the DC area. I talked to Donnie Vomit and Frankie Sin about what it’s like to be strange for a living.

Michael: Your upcoming performance, Strange For Hire, goes up on Saturday, January 31st at the Artisphere in Rosslyn. Tell us why the two of you make such a good team, and what else we can expect from the show.

Donny:  I come from a background of sideshow and variety, Frankie from the world of pin-up and burlesque. Our sensibilities combined created a show that touches on many eras of entertainment.

On the 31st I will be performing a handful of traditional stunts such as sword swallowing, Human Blockhead, and a bit of juggling along with new acts I am debuting such as The World’s Most Dangerous Cocktail and Stupid Toaster.

Frankie will be hitting the stage with classic burlesque acts laced with Fosse inspired moves, belly dance, and more. She will also be showing off her sideshow skills in the Peruvian Puzzle Box, ascending the Ladder of Machetes, Sword Balancing, and a few other surprises.

Frankie: Donny and I both have a deep love for what we do and the incredible history behind it. This isn’t something we do just on the side for fun. Performing is absolutely our full-time job, and we both truly care about what we put out there.

Sideshow and burlesque fill our days from sunup to sundown whether it’s rehearsing (which we do a lot!), costuming, brainstorming new acts, etc. I think our passion for the good ol’ art of showmanship and dedication to doing what makes our hearts sing is one reason why we make such a great team. Plus I get to look at that amazing mustache everyday.

Donny, from the outside looking in, the Coney Island Circus Sideshow seems to be the Juliard of the sideshow world. What was it like to host there and how do you think it’s shaped you as a performer?

Coney Island holds a rich history in sideshow entertainment that continues on today. While working in Coney I had the opportunity to perform eight to ten times a day all summer long. This allowed a great chance to hone the acts that I already had and develop new ones. Coney taught me who to balance traditional sideshow with contemporary sensibilities.

Throughout my years working in Coney I was fortunate to work with the best in the sideshow business, making friends and colleagues that I continue to work with. Performers such as Insectavora, the fire eating tattooed lady. She was in the first cast I worked with in Coney and she will be guest performing with us on the 31st.

Donny, you also have played a frequent host of the famous Annual Coney Island Beard and Moustache Competition- What are some of the top beards and moustaches that you’ve witnessed (aside from your own, of course)?

I began producing the Coney Island Beard and Moustache Competition soon after I grew my moustache. It has managed to bring the best and strangest facial hair down to Coney every September. My favorite facial hair that I have seen at the competitions would have to be from my judges such as Jennifer Miller, the woman with a beard.

Donny, your face is on a beer label. I don’t really have a question for that, I just wanted to throw that out there…

It’s amazing where hammering a nail into your face will take you! My mug has found its way onto the Coney Island Lager Human Blockhead beer. Working as a representative of the beer took me to a string of beer festivals around the US.

Frankie, for those not familiar, explain, in brief, a bit about burlesque and some common misconceptions about the trade.

Oooh, that’s a question that I could write a whole chapter on, but in short, burlesque, to me, is an avenue of entertainment that encompasses incredible costuming, fine tuned dancing, over the top glamour, and of course everyone’s favorite part, the big reveal.

The term burlesque has steadily woven it’s way into pop culture over the last decade, so these days it seems most people have a general understanding of what it is. I’m sure there are still some misconceptions out there about burlesque depending on who you ask, like that it’s seedy, or that we’re women of ill repute, but I’ve been lucky enough to not run into any first hand.

Burlesque attendees usually know what they’re in for, and those that don’t find that they get swept up into hollering right along side the rest of them. Burlesque offers a welcoming environment to give people a bit of skin along with a great show without the intimidation some might feel about going into a gentlemen’s club. It’s celebratory, inspiring, and just good ol’ (sort of) clean fun! ::wink wink::

Frankie, what attracted you to the world of burlesque and how does your particular style differ, based on your influences (geographical and otherwise)?

I grew up watching classic films, with a passion for dance, and learned how to sew my own costumes at a young age. Burlesque was a way to combine all the little things that make my heart skip a beat, basically immersing myself into my own technicolor musical on stage every night. I definitely feel my style of performing draws heavily from that love of the golden era of glamour.

Dance and fluid movement are extremely important to me, I don’t feel comfortable just standing there removing my clothes, it’s all in the details, and rehearsing until it’s second nature. I basically long to be Gene Kelly…in a dress.

My joy comes from having the opportunity to give the audience a few moments of pure escapism, to make them smile, and maybe feel like they’ve had a little peek at what entertainment was like in days gone by.

Frankie and Donny, what are some of the most incredible places you have ever performed?

Frankie: One of my most incredible and unexpected places was when I was cast to perform in Frank Darabont’s TV series Mob City. I thought I was being cast as background, but suddenly found myself being pushed through the wings and onto a stage being told I was going to dance to a live band, to a song I’d never heard, in front of Simon Pegg, Frank and a cast and crew of about 200 people. It was one of those half “pinch me I’m dreaming,” and half “holy moly, what am I doing” moments. It ended up being one of the most inspiring days of my career, Frank was ecstatic with the results, and kept screaming out the most incredible compliment and encouragement I’ve ever gotten. I’ll never forget that moment.

That, and when Donny and I were flown to the Bahamas to perform at the Atlantis Casino last year was pretty magical!

Donny: Being strange for a living has landed me in many iconic work spaces. I spent many years swallowing swords for Ripley’s Believe it or Not! in Times Square 42nd street, working the grind show in Coney Island. I spent a month in London doing a show on the South Bank overlooking the River Thames. I look forward to see where hammering nails into my face takes me next.

Donny, you have previously been included in the Shocked and Amazed show series in the past at Artisphere- what was your impression of the venue and production? How may it differ from other sideshow productions, currently in play today?

Artisphere attracts the most intelligent, attractive and good looking audiences I have ever seen. In all honesty performing at Artisphere is a pleasure. They have cultivated some of the best fringe entertainment, pulling them from the midway and the nightclubs and presenting them to the theater going audiences.

Are you excited to have the additional element of sideshow and circus related artist exhibits kicking off the event on the 31st?  How do you think art enhances the performance element, and are you bringing any art of your own to the show?

We’re super excited to get to experience the exhibit side of the show. It’s a wonderful combination to have both avenues of creativity under one roof, it’s sure to be one inspiring evening! Everything in our show, from the props, the sideshow banners, to the costumes Frankie wears were designed and hand made by us, so in a way we’ll be bringing our own little bits and pieces of art as well. We’ll also be bringing a banner or two of Donny painted by the amazing Marie Roberts from his Coney Island days. 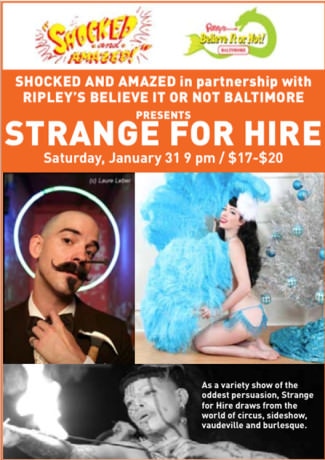 Shocked & Amazed Presents: Strange For Hire will play for one night only on Saturday, January 31, 2015 at the Artisphere in Rosslyn – 1101 Wilson Boulevard, in Arlington, Virginia. Tickets are running out fast, and may be purchased online.

LINK
An Interview with ‘Shocked and Amazed Presents: Strange for Hires’ Producers Alex Doll and James Taylor by Michael Poandl.