No girl grows up dreaming of terminating a pregnancy. There are plenty of aspirational fantasies out there—some good for her, some not—but to be in a situation where she decides to have an abortion is never a girl’s fond hope.

What those real-life situations can turn out to be—and how a woman in such a circumstance might deliberate on that decision then reach it—has been characterized in the national conversation for decades in some very broad, distorting strokes. Proponents and advocates on both sides of the contested issue have often argued in ways that are more polemical than true, more point-scoring than personal, more partisan than humanly honest. And until I saw a remarkable original theater piece called Out of Silence: Abortion Stories from the 1 in 3 Campaign, I had not realized what has been missing: the compelling and illuminating focus on character, motivation, and story that live theater does best. 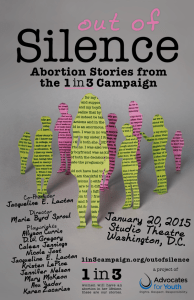 It was one performance only, at The Studio Theatre, a bill of thirteen original short plays, each based on real women’s true experience, scripted for the stage by a who’s who of ten Metro DC female playwrights and given an impressive full production, directed by Marie Byrd Sproul.

The program was presented by the 1 in 3 Campaign, a project of the nonprofit Advocates for Youth that takes its name from the fact that one in three women will have an abortion in her lifetime. In order to bring to light what that statistic represents, the campaign collected stories from hundreds of those women. To then bring those stories to life, the project enlisted playwright Jacqueline E. Lawton to choose other playwrights, give them texts of selected stories to work from, and then assemble the scripts they delivered into what became a deeply affecting evening.

The idea behind Out of Silence is that eventually the script can be produced by campus and other groups across the country in order to use theater to raise visibility of women’s abortion experiences similar to the way Eve Ensler’s The Vagina Monologues has raised awareness of women’s experiences in sex and sexual assault. Ensler, who developedVagina Monologues from interviews, was the sole and singular dramatist who shaped those particular women’s voices into an episodic play that for nearly two decades has  given voice to countless others. Out of Silence, just starting out, brings two important dimensions to the process that make its future even more promising.

1. The writers are diverse, each accomplished in her own right: Allyson Currin, Caleen Jennings, Jacqueline E. Lawton, Mary McKeon, Anu Yadav, DW Gregory, Nicole Jost, Kristen LePine, Jennifer L. Nelson, and Karen Zacarias. Each writer is gifted in a unique use of language and stage storytelling, and the result is a whole with a rich texture that surpasses the sum of its parts. One catches on soon that each playlet will feature a character who, for reasons we are to learn, decides to have an abortion. As the compelling variety of life-driven reasons unfolds, the stories are told in an equally engaging range of theatrical styles—from sorrowful monologue to cleverly comic sketch and everything in between.

2. The plays are peopled with characters who talk, for the most part, to each other (not solely  to us the audience), because they must, because they need to, to work through a conflict or a crisis, to come to some kind of resolution, however difficult, however painful, to sort out relationships, emotions, and practicalities that now center excruciatingly on an unwanted pregnancy. In the production I saw, there were five exceedingly talented actors, four women and one man: Shayna Blass, Celeste Jones, Jon Hudson Odom, Tuyet Thi Pham, and Fatima Quander. There were many fine performances, but Blass and Odom’s skillfully comic turn in Karen Zacarias’ Checks & Balances, about a young woman’s visit to a financial adviser to see if she could afford to raise a baby (um, no), kept me laughing out loud.

No one in this play decides not to have an abortion. That would have made it a different play, of course, but the thought crossed my mind, Why not? Isn’t complexity what theater also does really well?

There was, perhaps predictably, a protest out on the street beforehand. Demonstrators held up posters with photos of fetuses and filled the sidewalk with slogans and helplines in colored chalk. “I regret my abortion,” said one sign. “Abortion stops a beating heart,” said some chalk. As if what? As if no one knows that? As if the choice was a childhood wish-come-true?

During a talkback after with several of the playwrights, one of them wondered aloud whether the demonstrators outside would be moved by the performance that had so palpably moved the audience in the theater. Maybe not. But maybe.

The capacity of theater to draw us in, to make us care about characters, to fall in love or like with them, to identify with them, to make us want them to be okay—that’s what makes Out of Silence such an extraordinarily compassionate game changer in consciousness raising about this troubling topic in these troubled times.

It’s possible that I witnessed the only time this cast will perform this work together, and the only time this excellent costume design (Brian J. Shaw), sound design (Jeffrey Dorfman), scenic design (Paige Hathaway), and lighting design (Sarah Kost) will ever come together as a complete stage production. I wish that weren’t the case. I wish there was a run and I could say run to it. Because this is one of those instances where one can honestly say, “DC theater, ya did good.” And, with hope, when the script gets done and done again across the land, what started here will startle the country as it did those few who got to see it first.