Some families lie to the world, some families lie to each other, and some families even lie to themselves. In the Wyeth family, you get all three. Jon Robin Baitz’s drama Other Desert Cities delves into the secrets, pain and deception that has haunted this seemingly normal family for far too long. When Polly and Lyman Wyeth’s daughter Brooke returns home for the holidays for the first time in six years, she comes bearing news about her new book that guarantees the family will not be having a merry Christmas. From contrasting political views and uncomfortable moments to suspected betrayal and grim accusations, the family must wade through it all to uncover the truth and begin to find peace. 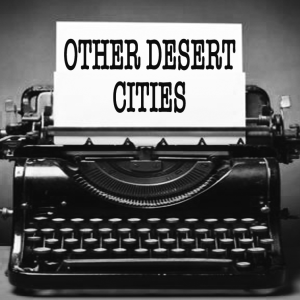 On February 6, 2015, Other Desert Cities will open at The Highwood Theatre in downtown Silver Spring, MD. It is presented by Your Theatre, a division of Highwood producing professional shows with combined production teams of both professionals and students, and is directed by Ryan Gunning. The raw authenticity is what initially drew Gunning to the show. She states, “The script of Other Desert Cities is simply beautiful. It’s dark and brutal at times, but also funny and real. That’s what sets this play apart. It’s real. The audience is forced to sit in a room and witness the darkest parts of a family. It is uncomfortable and awkward and real. I think the audience will be able to relate to this show and feel for each of these characters on a deep and emotional level.”

Relating to the characters has come naturally to the cast. Sue Schaffel, who plays the staunchly conservative mother Polly Wyeth, makes the comparison, “Polly is not the least bit concerned with being politically correct and speaks her mind. I relate to that aspect of her. I tend to like to be able to speak without having any restrictions.”

Bob Chaves, who portrays actor­-turned-­politician and family patriarch Lyman
Wyeth, calls on his own past experiences to help fuel his relationship to the character, “Some of the themes of the play relate back to those days of my distant and remote youth, and I can draw a lot of emotion from some of those recollections.” Tim Torre, playing the younger brother Trip Wyeth, weighs in, “Trip is the impartial observer in the play. The guy who tries to keep the peace in every tense situation. This mixed with using humor as a defense mechanism, I can definitely relate to. He also tends to be a little preachy when it comes to his personal philosophies, and that’s definitely me.”

Finding these similarities between actor and character is what makes a play like Other Desert Cities so compelling.  Although the characters may be relatable, unpeeling layer after complex layer has not been an easy task for the cast.

Melissa Robinson, who brings the recovering alcoholic aunt Silda Grauman to life, claims her biggest challenge has been, “making Silda a natural, nuanced and fully realized character without taking away any of her manic energy, verve, wit and ‘out there’ moments. It’s hitting that balance.”

While Anna Jackson, who plays prodigal daughter Brooke Wyeth, shares the struggle to capture the many dimensions of her character, “She can easily come off as disagreeable and moody and self­indulgent, and I have been fighting to make her understood. She fights because she can’t understand, and she tries to be a part of this world that she really doesn’t agree with at all. I have to remind myself that she does love her family. It’s not about her lack of love, it’s her need to understand the things and people that shaped her.” Brooke and the entire family have been through a harrowing ordeal, and their differing worldviews and perpetual secrecy only serve to drive the wedge further between them. But amidst all of the hypocrisy, anger, confessions and heartbreak, Trip makes an observation that stops his dysfunctional family in their tracks: “On your last day on this planet, you’ll be scared, and it won’t matter as you take your last breath, all that will have mattered is how you loved.”

Other Desert Cities is a perfect complement to Highwood’s 2014 ­ 2015 season theme, The Human Network ­ exploring our stories, emotions, and connections to one another.