Sometimes, if you’re lucky, an artist comes along who changes your life in an immeasurable way: their art shapes you, comforts you, inspires and excites you…for me, these artists are the members of Motion City Soundtrack, a rock/alternative rock band from Minneapolis, Minnesota. I had the great pleasure to see them perform live at The Fillmore in Silver Spring on January 26, 2015 as part of their Commit This to Memory ten-year Anniversary Tour. They performed their second album (released ten years ago) in its entirety, and in its original order.

First, let me describe the venue itself, which was fantastic. Having never been to The Fillmore before, and being unfamiliar with the Silver Spring area in general, I had no idea what to expect. It was with the most pleasant surprise when I found I was able to find ample and reasonably priced parking right around the corner (next to a Metro station, to boot). Getting in and out of this place was a breeze, and that is not usually the case for most concert venues! The music hall was spacious and airy, and the sound quality was perfect (excellent mix, balanced instruments, and clear vocals). Now, I can be known as an anxious person, and I have never done well with chaotic crowds and noise (i.e. most live concerts), so I was a little worried that I would become easily overwhelmed, but I never had a single wavering moment. I was incredibly impressed with this venue and plan on visiting again!

Motion City Soundtrack consists of five members: Justin Pierre on lead vocals and guitar, Joshua Cain on vocals and guitar, Jesse Johnson on Moog synthesizer and keyboards, Matt Taylor on bass guitar and vocals, and Tony Thaxton on drums. From the moment I entered the hall I knew that this was a fiercely loyal fan base that I was a part of– before MCS came onstage, I chatted with people who, like myself, had been deeply influenced by this band’s music and lyrics. We shared personal stories about how their music has helped us through a number of things; I compared their music to extremely valuable (and free!) therapy, while others said things like “they were there for me when no one else was.” By the time the lights lowered, I had made a handful of new friends. Meeting people who love something as much as you do and creating these relationships is just as thrilling as the concert itself, which is a major reason why the power of live music is irreplaceable. 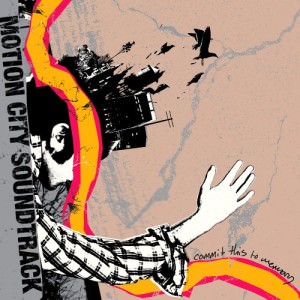 Motion City Soundtrack followed their opening act, Team Spirit, who did a fine job of revving up the crowd’s energy with their fast tracks, including “Teenage Heart” and “Surrender.” As they took the stage, it was clear how MCS hooked and kept such loyal and loving fans for so many years– these guys are real. After thanking us for braving the winter weather to come see them, they dove right into it, playing the first song from Commit This to Memory, “Attractive Today.” Following this was a hit song that first caught the attention of many (myself included), “Everything is Alright”. This is a song about anxiety, a topic that appears time and time again in Pierre’s lyrics (him being a victim of anxiety and addiction himself). Between songs, Justin chats with the crowd as if we were all hanging out around his kitchen table…just, you know, hundreds of friends having an intimate conversation. Quirky anecdotes, birthday shout-outs, and lighthearted jokes keep the mood playful, even though many of the songs are anything but. “L.G. FUAD” is full of angsty frustration, while “Hold Me Down“ resonates with the grief that comes with the ending of a relationship. The songs are relatable and beautifully written, with melodies made even the most stoic concert-goer move to the beat.

As an unexpected and delightful treat, MCS played a number of songs from albums other than Commit This to Memory. These included the hit “This is For Real”, “Her Words Destroyed My Planet”, “The Future Freaks Me Out”, and one of my very favorites, “The End.” The artists kept the energy up throughout the show, especially Jesse Johnson, whose enthusiasm was contagious, and his gravity-defying leaps were a thrill to watch. At the end of the night, and two encores later, it was time to say goodnight.

As biased as I am, I really cannot call this piece a “review”…it is really more akin to a love letter. Motion City Soundtrack has developed a truly masterful collection of music, and I couldn’t recommend anyone higher if you’re searching for some new music. Also, as someone who does not frequent too many concerts, I can say that this experience of live music was exceptional, and a lot of that had to do with the professional, easy-to-navigate layout of The Fillmore. This is an excellent venue for a night of entertainment, and these two elements combined made for a perfect night out!