Set during the Roaring Twenties in the heyday of prohibition, the Tony-winning musical Nice Work If You Can Get It is a celebration of the best of the iconic music of George and Ira Gershwin. 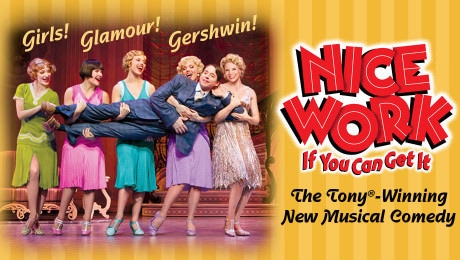 A musical comedy, Nice Work If You Can Get It tells the tale of a wealthy, charming playboy Jimmy Winter (played by Alex Enterline) on the eve of his wedding to a dame (played by Rachel Scarr) to prove himself to his overbearing mother (played by Barbara Weetman). Things go awry when Jimmy meets Billie Bendix (played by the incredible Mariah MacFarlane)—a down-to-earth, spirited (no pun intended) bootlegger—with whom he instantly falls in love.

The rest of the musical—which features hilarious interactions between Jimmy’s lovers and his cohort of groupies and Billie Bendix’s gang of accomplices in Jimmy’s estate in Long Island, New York—in an outrageous celebration of the best that musical comedy has to offer.

With book by Tony Award winner Joe DiPietro (Memphis) and direction and choreography by three-time Tony winner Kathleen Marshall (Anything Goes), Nice Work If You Can Get It is a classic, show-stopping musical comedy from the moment the first curtain rises. The most magnificent part of the musical, and, by-and-large, it’s driving force are the instantly recognizable tunes from George and Ira Gershwin. Taking classics like “But Not For Me,” “Let’s Call the Whole Thing Off,” “I’ve Got a Crush on You,” and “Someone to Watch Over Me,” Nice Work If You Can Get It captures the essence and timeless style of the Gershwins, interweaving a hilarious sitcom-like plot and giving the songs a modern, musical-theatre update.

Alex Enterline as Jimmy Winter captures the naiveté of a millionaire playboy while simultaneously being able to give his character depth—not just the caricature that is depicted on the cheeky playbill posters. His first solo in the show “Nice Work If You Can Get It,” is a charming number that brings audiences into his point-of-view and showcases his energetic playfulness. Even after a few hours, his charming smile never gets old.

Mariah MacFarlane is one of the stars of the show and steals the stage every time she steps on it. Her rendition of the classic hit, and possibly the best-known song of the night, “Someone to Watch Over Me,” was scintillating. Having to walk the line between playing a love-struck tomboy and a hearty bootlegger, MacFarlane is required to jump between male and female costumes and gender roles throughout the evening. Her transitions are seamless, and it was a joy to watch her shine on stage.

The entire ensemble is overflowing with talent, but a few others really stood out. Rachel Scarr as fiancé Eileen Evergreen was captivating to watch when she sang “Delishious”—think an even more over-the-top version of Glinda from Wicked, but in an oversized pink bubble bath. Reed Campbell as the mobster-turned-butler Cookie was one of the unexpected stars of the stage: his role as a sidekick bootlegger and a butler don’t necessarily lend themselves to stardom, but his commitment to his role really came through, and he delivered a performance that provided just the right comedic relief at the right time and propelled the story forward naturally and with finesse. Finally, Stephanie Harter Gilmore as the prohibitionist Duchess Estonia Dulworth earned the most thunderous applause of the night with “Looking for a Boy,” a hilarious drunken ballad—an emotional roller coaster of a song—in which her character enjoys alcohol for the first time and lets loose. Her acting is as much of a joy to watch as her singing.

The melodies are lush thanks to music supervisor Shawn Gough, music director Charlie Reuter, and orchestrator Bill Elliott, who showcase the best of the genre from the overture to the final curtain call.

The outfits are similarly glitzy (costume design by Martin Pakledinaz), which capture the glamour of the era with numerous costume changes that capture the over-the-top opulance of the rich and wealthy, while also giving dignity and strength to the working classes. In one of the most cheeky scenes in which Eileen Evergreen—Jimmy’s fiancé—takes a bath, the creative costuming really comes to life with dancers prancing around in ballet-style garb and a long ribbon that doubles as a bath towel, which then is creatively draped around Eileen and becomes her dress for the musical number.

The set—which essentially takes place at a mansion on Long Island—is dynamic, adjusting ever so slightly between scenes to signify a change in venue. Against the white marble façade of the mansion, the sets communicate grandeur and opulence, and help to place the story in a historical time and place without getting lost unnecessarily in the specifics.

The entire production is top-notch. Although George and Ira Gershwin may never have imagined that their music would be enjoyed in this way, I’m sure that they would be proud. Whether you’re a long-time Gershwin fan or have never heard their music before in your life, Nice Work If You Can Get It has something for everyone.

Running time: Approximately 2 hours and 30 minutes, including a 15-minute intermission.

Nice Work If You Can Get It runs through Saturday, January 31, 2015 at The Warner Theatre – 513 13th Street, in Washington, DC. For tickets, purchase them online.