Fifty years ago this coming Thanksgiving, Arlo Guthrie and company take a truck load of garbage out of a friend’s house near Stockbridge, Massachusetts. Finding the local dump closed for the holiday, they proceed to dump the garbage on top of some other garbage in a ravine on the side of the road. 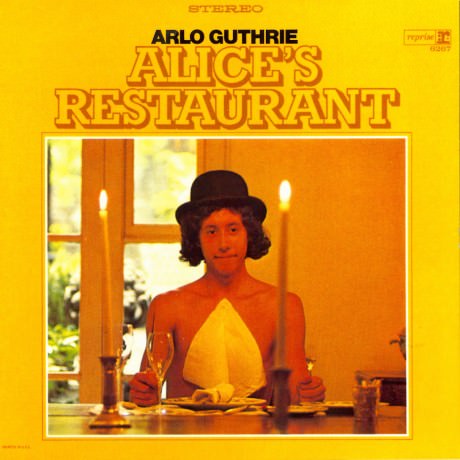 The next morning Arlo gets a call from the local police chief, arrests soon follow, and the rest is music history.

The evening began with the strangest little film you will ever see. Rescued from a dusty box, probably from some attic somewhere, “The Motorcycle (I don’t want a pickle) Song” accompanied a bunch of clay-mation animated vegetables on a cross country motorcycle trip that ends with a pickle sailing over a cliff but being saved by landing on a police car.

Then Arlo Guthrie and his band entered. With Terry Hall on drums, Bobby Sweet on guitar and vocals, Darren Todd on bass, and Guthrie’s son Abe Guthrie, on keyboards, they took us back to the original counter-culture.

This was a time before America had a professional army or a Homeland Security Department, when the Vietnam War and the draft engaged an entire generation of young people in what it means to be citizens and fighting and possibly dying on foreign soil.

They took us back to a time when challenging authority and parents was a necessary step on the road to adulthood and music wasn’t a Spotify download but an experience that brought people together.

As “Alice’s Restaurant” clearly exemplifies, Arlo Guthrie is as much a master storyteller as he is a master songwriter, musician, and singer. The majority of the song’s 18 minutes is spoken word poetry framed by a sung verse. And in this anniversary tour the song is accompanied by black and white still images from the 1969 movie.

The result is an emotional rush, for an era, for a man, for a nation.

Then, when Arlo explains that the policeman in the 1969 film, Obie, was not a hired actor but the actual cop who had arrested him decades several years earlier, and that through the process of making the film they had overcome their initial distrust of one another and become friends, his hopes for “song” become clear.

For Arlo Guthrie music is a process, an experience for sharing, not the content of the lyrics as much as the intent behind them.

Later in the evening, when Arlo sang his father Woody Guthrie’s famous “This Land is Our Land”, he describes the elation that his mother, Marjorie Guthrie, experienced when she heard young people in China singing her husband’s iconic American song in the early 1980s as a tribute to their own love of country. The lyrics didn’t matter: all that mattered was the intent behind them.

Another multimedia moment happened near the end of the evening when Arlo sang, “Highway in the Wind,” a love to Jackie, his wife of 43 years who died recently from liver cancer. As Arlo sang, photographs of his wife and family — they raised four children together — flashed on the screen. The importance of family, friends, and community resonated throughout the hall.

Another emotionally moving moment in the concert took place during Arlo’s presentation of “When a Soldier Makes It Home.” Written in 1994, the song pays tribute to the pain and loneliness of both the American veterans of Vietnam and the Soviet veterans of Afghanistan.

Ironically, even though we do not see protests against America’s current war in Afghanistan, neither does one see any public energy to end the longest war in American history; and with 22 suicides-a-day among veterans perhaps it would have been better if every US citizen acknowledged ownership of the war.

To be sure, most of the evening was spent on the up-beat. Between joyful renditions of his ever popular “The City of New Orleans” (by Steve Goodman) to the playfully whimsical children’s song, “Me and My Goose” to Arlo’s own story about his life backstage at Woodstock and, then, suddenly being asked to perform early and high as that jet liner in “Coming into Los Angeles” the audience rolled with good spirits.

And as the evening came to a close and the audience left the hall to the bitter chill outside, those good spirits left with us. Arlo final song, which was also one of the final lyrics that his father penned, was “My Peace.”