Todd Ellison and Friends delivered an early Valentine to audiences at George Mason University’s Center for the Arts Sunday afternoon. The Romance of Broadway delivered a charming musical afternoon packed with Broadway standards, as well as some little known gems. 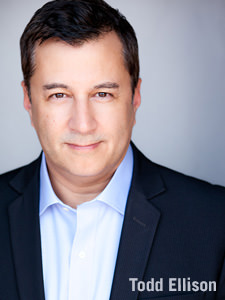 Charming and self-effacing, Ellison regaled the audience with tales of his childhood in Connecticut (he grew up on Melody Street and Harmony Lane was just around the corner) and his journey to an internationally acclaimed career as a musical director and conductor whose work includes such Broadway productions as the Annie revival, La Cage aux Folles, Spamalot, and the Broadway-bound An American In Paris. Ellison’s between-song patter was just right, establishing a warm connection with his audience.

In addition to being a top-notch conductor, pianist, and musical director, Ellison knows how to craft a show that envelops the audience and delivers an emotional punch. The Romance of Broadway is tender and lush without sinking into the saccharine. Although Ellison surrounds himself with strong singers, the show’s most poignant moment is his, delivered at the end of Act 2 as he accompanied himself on Maury Yeston’s “New Words” – a love song for his two young sons.

Ellison’s Friends aren’t too shabby either. Ross Lekites, currently appearing in the first national tour of Kinky Boots, is a star in the making. His soaring tenor never faltered, from the tender “Maria” from West Side Story to the cocky, swaggering “What Do I Need with Love?” from Thoroughly Modern Millie. Lekites’ fresh interpretations of “On the Street Where You Live” (My Fair Lady) and “Ten Minutes Ago” (Cinderella) left a strong impression. This young man is definitely one to watch.

And speaking of an artist to watch… Klea Blackhurst is a bundle of energetic belting joy! Her strong voice evokes shades of Ethel Merman and can she put a number over. Blackhurst held the audience in the palm of her hand, delivering a bright and brassy mash-up of “Game of Love/Taking a Chance on Love” and a swinging “I Got Lost in His Arms”. One of the highlights of the concert was her rendition of the late Marvin Hamlisch’s “While I Still Have the Time” from The Nutty Professor, which segued into a rousing delivery of “Before the Parade Passes By” from Hello, Dolly!.

Soprano Kathryn Guthrie evoked the pure tones and lyricism of a young Shirley Jones with soaring renditions of “Til There Was You” and “My White Knight” from The Music Man. Guthrie displayed both a more mischievous side as well as the full range of her gorgeous soprano on “I Enjoy Being a Girl” (Flower Drum Song), and “Glitter and Be Gay” from Candide.

Christopher Sanders, who has played more than 1,000 performances as Emile De Becque in South Pacific across the country, delivered powerful and emotional renditions of “Some Enchanted Evening” and “This Nearly Was Mine.”

One of his best moments, however, was a meltingly gorgeous mash-up of “Fallin’” from Marvin Hamlisch and Carole Bayer Sager’s They’re Playing Our Song and “Maybe This Time” from John Kander and Fred Ebb’s Cabaret.

Ellison’s arrangements in The Romance of Broadway were spot-on, yielding some wonderfully inventive combinations. One of my favorites of the afternoon was a Gershwin Trio, featuring Blackhurst on “Someone to Watch Over Me,” Lekites on “Can’t Take That Away From Me,” and Guthrie on “But Not For Me.” These three distinct songs and artists combined to deliver a unique, goosebumpy finale.

Todd Ellison and Friends delivered their The Romance of Broadway for one-night only at George Mason’s Center for the Arts on February 8, 2015. But don’t despair. Todd Ellison returns with more friends to perform Classic Broadway on Sunday, April 12, 2015 at 4:00 p.m. Don’t miss this opportunity to hear one of Broadway’s finest musical directors share his love and passion for musical theatre with DC audiences.