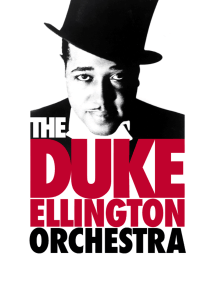 What better way to set the mood than swaying with your sweetheart to the tune of “Prelude to a Kiss”? Just in time for a weekend of love, the Duke Ellington Orchestra swings into town for two shows at the Bethesda Blues & Jazz Supper Club.

While the great Duke may not be with us anymore, there’s no doubt his music is still going strong. But so is his band.

At the time of his passing in 1974, the prolific composer’s band had 51 years and more than 20,000 worldwide performances under its belt.

Now under the direction of Lead Saxophonist Charlie Young (Paul is working on his Masters at NYU), the band continues to tour extensively, preserving and sharing that unique quality of the jazz giant’s 2,000-plus arrangements.

Young, now artistic director and conductor of the Smithsonian Jazz Masterworks Orchestra, was a hustling musician based in DC when Mercer rang him 27 years ago.

“As is typical in music industry, one day you can be at home twiddling your thumbs and the next you’re playing,” Young says.

He hopped a transatlantic flight to Geneva for his first gig with the band the very next weekend.

Still, Young had hardly been twiddling his thumbs. He’d mastered the baritone and was no stranger to the limelight.

“I had my own group at the time, and we were traveling and hitting DC nightclubs,” he recalls. “I was quite busy as far as a creative musician was concerned, and I had worked with some greats – Ella Fitzgerald for one – but I had never toured with a famous group like that. I’d never had a steady gig.”

Yes, he dropped Ella’s name just like that. And he’s the first to admit that what ensued was a pretty sweet career.

“I live a charmed life,” Young says. “One day I’d be in DC and the next on a yacht on the Riviera.”

Working for the Smithsonian has granted him access to Duke’s original compositions in their entirety.

“It’s in those pieces that never made it to the limelight where I discover more detail and areas for continued growth and development,” he notes.

This weekend’s shows promise to be a real treat, as dance engagements have become few and far between.

“Most jazz has turned into more of a listening art form,” Young says. “But when first founded the band mostly did shows of that nature.”

So when planning a date with your valentine this week, ask yourself: What would Duke say?

“It don’t mean a thing if it ain’t got that swing.”