What a wonderful way to spend Valentine’s Day! The National Chamber Ensemble presented a colorful concert for Valentine’s Day with music by Peter Ilych Tchaikovsky, one of the greatest composers of the Romantic Period.

On a cold stormy night, a large capacity audience of about 300 braved the weather were warmed by the exquisite music of one of the most romantic composers of all time. The hosts for the evening were Bob and Olga Ryan. The celebrated DC weatherman/meteorologist and his wife made delightful hosts. Bob Ryan appropriately provided a weather report for the ride home and his wife Olga who is Russian, spoke about Tchaikovsky and their trip to St .Petersburg a few years ago.

The concert began with the Waltz from the Ballet Sleeping Beauty. A beautiful image of dancers projected on the stage behind the ensemble helped bring the dance to life. One is used to hearing this composition with full symphony orchestra. In this string quartet version we heard all the wonderful musical material presented in a slimmed down setting. The performance was charming and well-played. The pure string sound brought more warmth to this composition. Mr. Sushansky set the tone when he announced that the ensemble was excited and relieved to perform this waltz. “Excited, because it was such great music but relieved because the complete ballet was just under 4 hours, with intermissions.”

Next came Tchaikovsky’s famous Quartet No.1 in D Major, Opus 11. This quartet has enjoyed popularity since it’s debut and is generally considered to be one of the earliest and greatest examples of Russian chamber music. The quartet received the nickname “The Accordion” from the opening movement which has the strings imitating the gentle sounds of an accordion. This work is also famous for one of Tchaikovsky’s greatest hits of all time.

The second movement Andante cantabile is based on a folk song that Tchaikovsky heard a gardener sing while visiting his beloved sister. The movement uses this folk song and Tchaikovsky’s own original material in a very poignant and original setting which at first hearing moved the great writer Tolstoy to tears. The duties of first violin for the first half of the concert were taken over by Najin Kim and she led the ensemble masterfully. Every instrument had a moment to shine, and the complex interactions of the instruments were handled with excellent cohesion. In the Andante Cantabile Ms. Kim played with great emotion and beauty of tone, gently supported by the ensemble.

The second half of the program consisted of the Serenade for Strings, Tchaikovsky’s homage to Mozart. who wrote a number of lovely serenades. Each work on the program created a different atmosphere through the wonderful and entertaining introductions the musicians gave. Before the music even began, the audience was transported to the city of St. Petersburg, where the work was premiered, through the projection of an image of a great palace hall onto the whole back wall of the stage. The combination of beautiful atmosphere and outstanding performance made the experience unique and special. Tchaikovsky absolutely adored the Serenade for Strings and couldn’t wait for it to be performed. ” This piece is from the heart,” he expressed. The Serenade for Strings is written for a whole chamber orchestra and requires a full string section to give it tonal completeness. Despite this fact, the National Chamber Ensemble could give the work justice with the flair, charm and beauty of tone with which they presented the composition. Leo Sushansky led the group in this work with authority and passion. The intricate overlapping runs and various duet passages were handled with great precision. In the charming waltz the two violins sang sweetly. The cello and viola solos were outstanding throughout. The ability to have four individual solo instruments to perform this work and not a whole section gave the possibility of making each part a more personal and intimate account of the music. It was really special. The Finale was played with great virtuosity and helped end the concert to rousing applause. All the artists were outstanding instrumentalists, but the real joy came from listening to the music unfold in a natural and spontaneous fashion and watching the sense comeradery and communication between all the musicians. 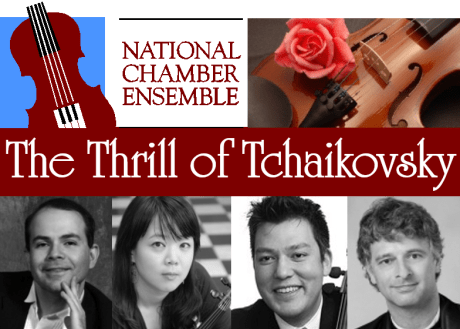 The concert was followed by a reception and an excellent opportunity to meet the artists and the opportunity to make some new acquaintances. It was a very special Valentine’s Day event. Talking to one of the couples at the reception, a young  gentleman said he saw the concert announced in the Washington Post and wanted to do something special for his lady. ” He did well,”she said, beaming.

The next National Chamber Ensemble performance is The Three B’s for Three on March 14, 2015, with music of Bach, Beethoven and Brahms, and an exciting marriage of music and dance with a collaboration with Bowen McCauley Dance Company. Lucy Bowen McCauley presents a new creation especially for NCE,  set to one of Bach’s famous compositions, the Chaconne in D Minor.

Valentine’s Day Concert: The Thrill of Tchaikovsky! was performed on February 14, 2015 at The National Chamber Ensemble performing at The Artisphere’s Rosslyn SpectrumTheatre- 1611 North Kent Street, in Arlington, VA. For tickets to their next concert The Three B’s for Three on Saturday, March 14, 2015  at 7:30 PM, purchase them here.

[Thanks to Leo Sushansky for his help in describing the program for our readers.]

Read other reviews and articles about The National Chamber Ensemble on DCMetroTheaterArts.