Artisphere Artist in Residence Elsabé Dixon sits at a table before an array of black on white biomorphic forms lining the gallery walls like magnified micro-organisms. Upon closer inspection, webs of silk weave through some of the forms, and tiny cocoons are nestled in honeycomb compartments. Dixon’s artwork revolves around sericulture, the practice of raising silkworms to make silk. In the gallery, Dixon creates environments for the silkworms to do what they do, and provides a forum for people to interact and wonder at these hardworking and fascinating insects.

The South African born, Virginia-based artist Dixon, chatted with me about her five-month residency at Artisphere, soon coming to a closes THIS SUNDAY,  February 22, 201.

Maggie: Your work has evolved over the months you’ve been at Artisphere, did the residency coincide with a full life cycle of the silkworms?

Elsabé: Yes, that was the whole idea… what happens if you put a 5000 year-old agricultural system – sericulture – in front of a 21st century audience? The life cycle is really a platform for discussion. During the first months of the residency at Artisphere I introduced the public to a live insect life cycle. It is not a process that can be shown all at once so there is a time component to such a presentation – observation is done in staged fragments. I showed only part of the life cycle at each given day, week and month. The public was invited to revisit to see transformations and other parts of the cycle. First the silkworm was introduced. Initially the public fed the worms mulberry leaves and could also interact with the worms if they wanted to. Many sensory perceptions can be applied during interaction – one can hear them eating (the sound is much like a soft rain on a tin roof) or one could touch the worms or just watch them. There are smells associated with the raising of silk worms – the worm frass (droppings) has an odor similar to that of fresh tobacco. The worms turn into spinners, they stop eating altogether and start spinning for a period of three days and nights. Worms turning into spinners are then carefully placed into an “insect” environment that can hold or facilitate the spinning of cocoons. The spinners can also be placed on flat surfaces and as they finish spinning, the metamorphoses process can be observed by the audience – the worms turn into pupa (small nugget-like brown forms, which later turn into moths). The period between the pupa stage and the moth stage lasts about ten days and then the moths emerge. The moths bring an incredible presence to the gallery space. They do not fly but flutter their wings in a mating ritual. This fluttering creates not only sound but also wind or motion. There were 4000 silk moths present in the Artisphere space with much sound and vibrating air currents.

What has been the reaction of the public to the silkworms? What happens when they realize that insects are living in the gallery space?

Some people are strangely attracted to insects and others harbor deep fears. The way I presented the live insect installation was to allow the audience to get as close as they wanted to or stay as far away from it as they wanted to. I mostly found a curious audience coming through Artisphere. They were willing to explore and get up close, touch and interact with the silkworms and especially the moths. The moths are quite magical and solicit wonderful reactions from people. They look like tiny white blossoms but they “twirr” and make a pleasant sound. They also release wind from the furious fluttering of their wings. Many sensory receptors at play here.

How important is it to you that raising silkworms is part of your ancestral heritage?

Even though I could not remember my first introduction to silkworm raising, it was an integral part of growing up in South Africa and being of French Huguenot decent. When we came of age in South Africa as teenagers, it was expected of us to “train” our silkworms to spin silk bookmarks for our bibles. The French Huguenots left France for South Africa after the declaration of the Edict of Nantes and brought with them their silk industries and their wine industries. Today the Cape is renown for its wine but the silk industry never took off. But, for whatever mysterious reason, children of these French Huguenots were still introducing their children at a very young age to these small-domesticated insects – the only domesticated insect in the world. Through this introduction, ethical value systems were transferred…and it is this transference that fascinates me. Why, indeed, do we even practice sericulture today? It is a 5000 year-old agricultural system, still pristinely intact, but it does not make any sense…we don’t need the silk.

You have staged “Tea Talks” on Sundays where experts in certain fields are invited. What is your goal for these sessions? Who were your guests for the Tea Talks?

I have had many people in the studio talking about their connection and references to insects. Engineers, architects, entomologist, artists, naturalists, arborists, curators, scientists, colleagues, family, friends and of course the public. I usually mixed in people I knew with people I did not know and gathered both the general public with professional colleagues and friends. This way I had a constant and a variable for most discussions. I tried to focus initial conversations on life cycle themes: During the spinning and cocoon structure cycle, I remember having an engineer I work with at Glenstone Museum, Clive Jerram, come to a Tea-Talk and draw parallels between the physical processes a silkworm goes through constructing a cocoon and methods of circuit board construction. Many artists visited the studio, and then, the unexpected visitors always energized the space also. Andy Gormwey, a naturalist; and Sam Droege who works for the Patuxent Wild Life Research Center studying bees (not honey bees, but the “other” kind); Paul Tukey, the founder of SAFELAWNS and international leader of the green movement, as well as the editor Michael-dharma Irwin came through the studio. Really, it was a vibrant hub and I plan to put together an e-book based on all the Tea –Talk conversations. I hope to have these talks inform future projects and instill my own systems of construction with an added social component of “shooting the breeze.” And, by doing so, invigorating an otherwise static practice of object making. We get so much more productive and clear when we are relaxed and give ourselves time to think things through using conversation with others as a means to derive information.

Your art practice might be construed as primarily community engagement; do you see it that way? What role does formal aesthetics or making objects play, if any?

Formal aesthetics play a huge role – the object is always the reason for congregating. It is the thing that triggers conversation and exchange so it needs to be presented very carefully. I tried to design the Artisphere installation in black, white and yellow to draw people in. I tried to use the reflective surfaces and the curve of the A.I.R gallery wall to best support these seductive colors and shapes.

How important are Artist-in-Residence opportunities to you? Do you see opportunities like these increasing in the DMV area or not? It’s a little bittersweet to know that Artisphere may be shut down by the Spring for budgetary reasons. Is it getting harder for artists to find venues in the area to show art that is not readily saleable?

I depend on Artist-in Residence opportunities; my work is all about exchange and residencies offer this. It allows for extended investigations and connections. I am completely saddened by Artisphere’s closing in June. I just spoke to Brian Davis who will be coming into the space after me and we made a pact that he would savor every moment of the last residency here. Artisphere has offered such incredible programming and Artisphere curator Cynthia Connolly and Executive Director Jay Ortiz have been tremendously supportive, as have been the many other staff members at Artisphere. I have seen fantastic shows here and met incredible artists. But, I would not say that it is hard to find venues. The DMV area offers many opportunities to show and work. You do however have to be willing to get out there and explore these possibilities. Being on the board of the Washington Sculptors Group, which facilitates three local exhibitions in galleries around the DMV area each year and, keeping track of the Washington Project for the Arts programming, helps me understand the DMV area and exhibition opportunities better.

What DMV resources and institutions do you find crucial in helping local artists further their careers?

Transformer, a unique and dynamic non-profit visual arts organization based in DC, which connects and promotes emerging visual artists through exhibition and educational programs, Hamiltonian gallery and the Brentwood Arts Exchange. What each of these organizations provide to the arts community might be different but essentially they all are lifelines.

In your view, are there any local groups or organizations that are doing a good job in fostering artistic communities?

Yes, absolutely. A prime example of a local group that does a fantastic job of fostering artistic community is Red Dirt Studio (Mt. Ranier, MD). The O Street Group (artist studios at 52 O St, NW, Wash, DC) is pretty tight-knit too, and then the various universities and colleges in the DMV area contribute a great deal to fostering strong artistic communities. And I constantly experience artists driving back and forth across the Potomac from Virginia, through DC to Baltimore and back again. In the last three years I have observed some great cross-pollination and outreach from one community to the next. 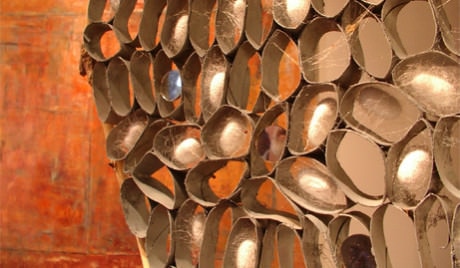 Here is more information on ELSABÉ DIXON: LIVE/LIFE
DISCUSSIONS ON LIVING ENVIRONMENTS, which ends THIS  Sunday.